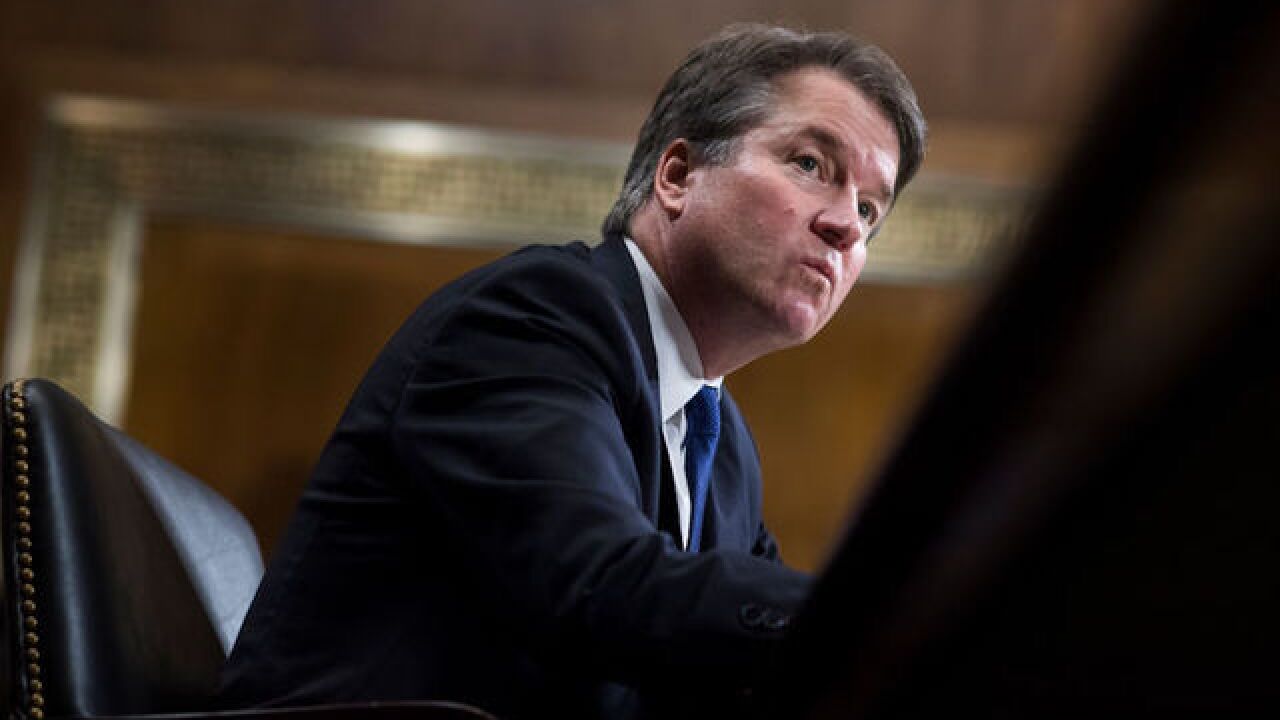 Image copyright 2018 Getty Images. All rights reserved. This material may not be published, broadcast, rewritten, or redistributed.
Pool
<p>Judge Brett Kavanaugh testifies during the Senate Judiciary Committee hearing on his nomination be an associate justice of the Supreme Court of the United States, focusing on allegations of sexual assault by Kavanaugh against Christine Blasey Ford in the early 1980s.</p>

The Senate Judiciary Committee has referred an individual who made "materially false statements" alleging misconduct by Supreme Court nominee Brett Kavanaugh to the FBI and Justice Department for a criminal investigation.

"Such acts are not only unfair; they are potentially illegal," committee Chairman Chuck Grassley wrote in a letter Saturday to Attorney General Jeff Sessions and FBI Director Chris Wray.

Grassley wants the FBI and DOJ to investigate whether the individual potentially obstructed the committee's nomination process of Kavanaugh by providing fraudulent information to committee investigators.

The office of Rhode Island Sen. Sheldon Whitehouse, a Democrat who sits on the Judiciary Committee, received a call on Monday concerning an allegation -- now found to be false -- of a 1985 incident in Newport where a woman was sexually assaulted on a boat by two heavily inebriated men she referred to as "Brett and Mark."

The person being referred has had his name redacted from the materials released. He said he heard of the assault that same day and physically confronted the two attackers, according to the documents. He falsely claimed that he realized one of the attackers was Kavanaugh after seeing his yearbook photo on TV over the weekend.

Kavanaugh was interviewed by the committee on Tuesday about the allegation and categorically denied the claim.

"I was not in Newport, haven't been on a boat in Newport. Not with Mark Judge on a boat, nor all those three things combined. This is just completely made up, or at least not me," Kavanaugh told the committee, according to transcripts.

The committee said after the transcripts of the interview became public on Wednesday, the individual "recanted" and apologized for the claim through a social media post.

In his letter to Sessions and Wray, Grassley wrote that the committee is "grateful to citizens who come forward with relevant information in good faith, even if they are not one hundred percent sure about what they know."

"But when individuals provide fabricated allegations to the Committee, diverting Committee resources during time-sensitive investigations, it materially impedes our work," he said.

The FBI is currently conducting a supplemental background investigation "limited to current credible allegations" of sexual assault and misconduct against Kavanaugh, with a deadline of Friday to conclude its probe.