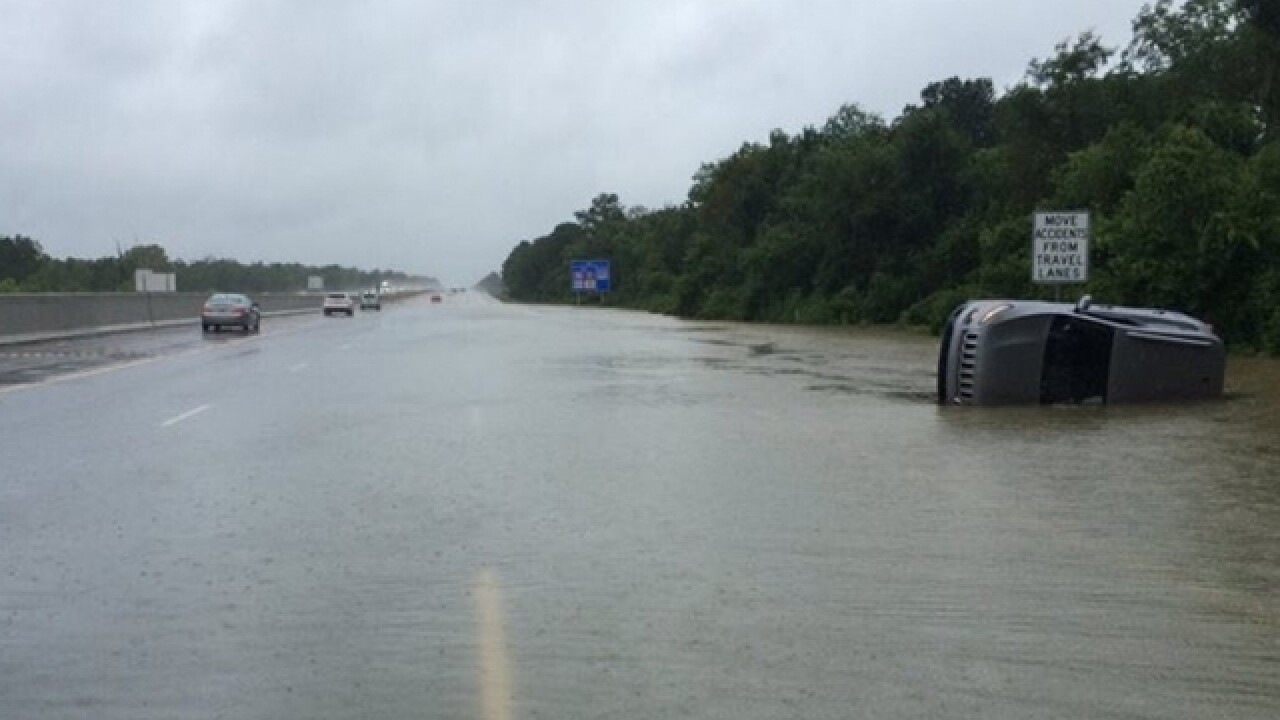 ST. AMANT, La. (AP) — Louisiana continues to dig itself out from devastating floods, with search parties going door to door looking for survivors or bodies trapped by flooding so powerful in some cases it disturbed the dead and sent caskets floating from cemeteries.

At least 13 people died in the flooding that swept through parts of southern Louisiana after torrential rains lashed the region. While the waters have slowly receded in many areas, the hard work of rebuilding lives is just ramping up, with people cleaning out their homes while others struggle to find a place to stay.

In a uniquely Louisiana problem, some families are also trying to rebury relatives whose caskets were unearthed by the floods.

At the Plainview Cemetery in Denham Springs, relatives gathered to see what had become of their plots, only to find a chaotic mess with some vaults overturned and in other cases only empty outlines of graves remaining.

"This is bad, it's just bad. You can't even come to see people. You don't know where they're at," said Ravonte Thomas, whose relative's casket was missing.

In southern Louisiana, the water table is so high that people generally cannot be buried six feet under. Caskets are often encased in vaults that are partially above ground, said Zeb Johnson, with the Calcasieu Parish coroner's office, who has extensive experience with recovering caskets scattered by flooding or hurricanes. Johnson said about 10 caskets unearthed in nearby Jefferson Davis Parish will have to be reburied once the water goes down. In East Baton Rouge Parish, at least two cemeteries have reported disruptions, according to the coroner's office.

In Livingston Parish, which was hard-hit by the floods, John Marston from the coroner's office said they've received reports of about 30 caskets unearthed, and they anticipate finding more when waters recede off the southern part of the parish.

"As the water table gets high and the ground gets saturated, it's just like a boat. It's going to float," he said. Marston said most of the caskets stayed within the cemetery grounds, although some have gone further.

The problem is so widespread that the government is asking people who have seen any problems with cemeteries as a result of flooding to contact local law enforcement.

In other areas the search for the living goes on.

Search teams going house to house are going out at least through the weekend, said Brant L. Thompson from the State Fire Marshal's office. Breaking down the various parishes where floods swept through on a grid, search teams have been knocking on doors, checking for signs of life like fresh tire tracks or debris piled up indicating someone is already inside cleaning things out. They hope for the best but with floods this catastrophic that caught many by surprise, they're also prepared for the worst.

"If we go by and this house has waterline up to the roof line, no one's been there, there's no trash piled out by the road, we want to check that house to see if anyone inside that, maybe, perished," said Clint Sistrunk, a firefighter. He and colleagues from of the Monroe Fire Department in northern Louisiana arrived Wednesday, part of waves of first responders who have been coming in from all over the state and country to help Louisiana.

Driving through neighborhoods where pools of water still stand outside and families are ripping out carpets and carrying water-logged sofas to the curb, the searchers are looking for houses with little activity. In many areas the water is still so high that people are rowing boats out to their houses to see what the situation is like inside.

"It is devastation, absolute devastation. I mean these homes, there are areas that have not flooded. They never flood and they flooded," said Stacey Rand of the Louisiana State Fire Marshal's office. "It caught everyone by surprise."