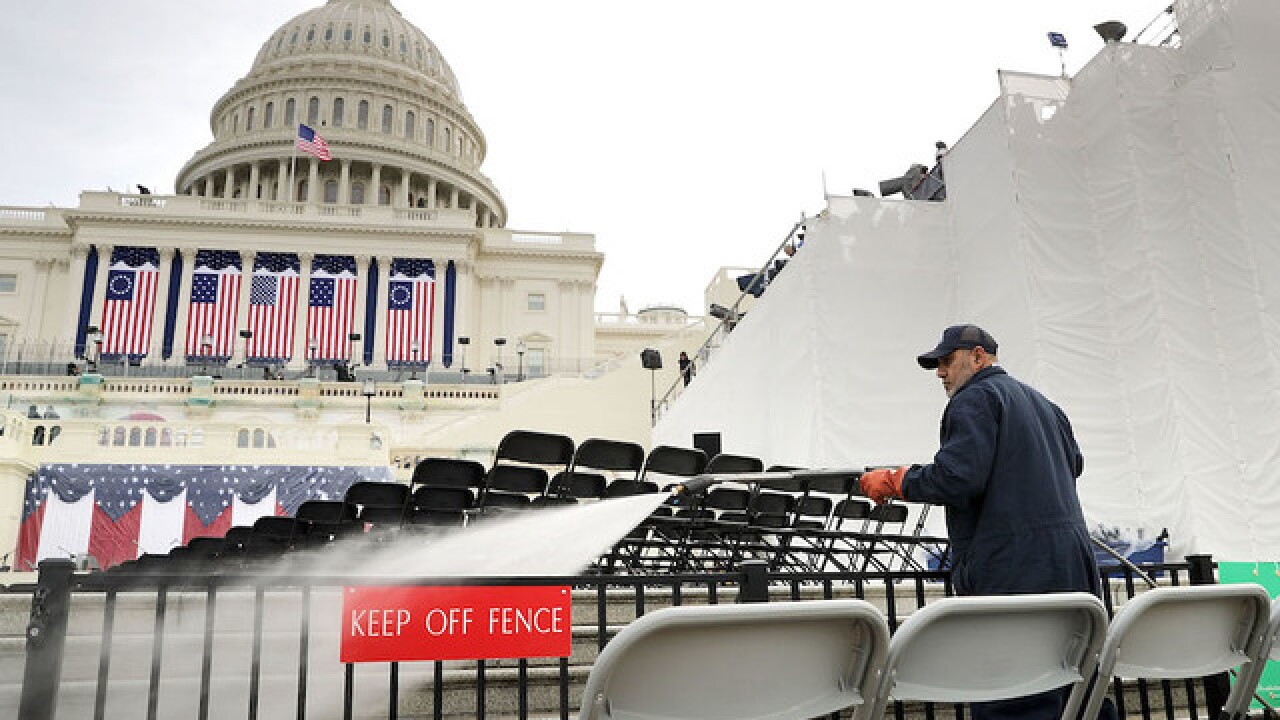 Copyright Getty Images
Chip Somodevilla
<p>Architect of the Capitol Stone Mason Division employee Romel Lazo uses a power washer to clean the West Front of the U.S. Capitol one day before the inaguration of Donald Trump January 19, 2017 in Washington, DC. Hundreds of thousands of people are expected to come to the National Mall to witness Trump being sworn in as the 45th president of the United States. </p>

The Joint Congressional Committee of Inaugural Ceremonies in Washington has released the schedule of events for Inauguration Day on Friday, when Donald Trump and Mike Pence will officially take the presidential and vice-presidential offices.

All times in the Eastern time zone:

Morning worship service: St. John's Episcopal Church, which is very close to the White House, will host the Trump and Pence families before inauguration ceremonies get under way — some time before 9:30 a.m.

9:30 a.m., ceremonies begin: Music will kick off events on the Capitol's west side.

11:30 a.m., opening remarks and the Vice-President's swearing-in ceremony: Religious leaders will give an invocation, and Mike Pence will be sworn in by Supreme Court Justice Clarence Thomas.

Noon, President's swearing-in ceremony and address: Donald Trump will be sworn in by Supreme Court Chief Justice John Roberts. Abraham Lincoln's inauguration Bible will be used. Trump will give his inaugural address at this time.

Departure of the outgoing president: This practice changes with each outgoing president, who left the capital following inauguration ceremonies. It is not clear how the Obamas will depart. They plan to reside in the Washington DC area until their youngest child finishes school.

Inaugural luncheon: After the oath of office, the new President has lunch inside the U.S. Capitol, and it is hosted by the Joint Congressional Committee on Inaugural Ceremonies.

3-5 p.m., inaugural parade: The new president and vice president will travel from the U.S. Capitol to the White House via a parade down Pennsylvania Avenue. The parade includes 8,000 participants.

7-11 p.m., inaugural balls: Trump, Pence and their wives will make appearances at three inaugural balls  — two at the Washington Convention Center and one at the National Building Museum.

The JCCIC has a website devoted to the day's events and the history of each one.