Copyright 2017 Scripps Media, Inc. All rights reserved. This material may not be published, broadcast, rewritten, or redistributed.
Alexander Hassenstein
By: Mina Abgoon
Posted at 7:50 PM, Feb 23, 2017
Google Chrome is the nation’s most popular web browser, meaning one recent scam could affect a massive amount of Internet users.
Cybersecurity experts are now warning Chrome users of the widespread scam, which affects only those who use Windows – Mac users are safe from it, for the time being, according to KCRA and other sources.
The scam infects computers with malware – short for malicious software -- through a simple popup window that asks them to download an update.
"The compromise starts when a victim innocently navigates to a website that has already been compromised by a hacker. Hackers launch their scam specifically from compromised WordPress web sites," Scott Schober, cybersecurity expert and author of "Hacked Again" told KCRA. "The script re-writes the compromised website on the victim's browser, creating an illegible page that is completely fake and prompts the user to download a supposed corrective font."
The popup alert reads, "The 'HoeflerText' font wasn't found." 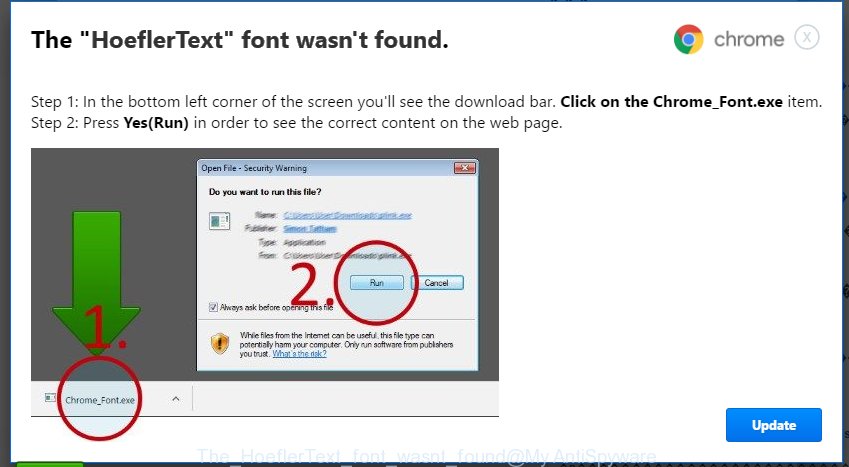 If users click on it, a form of malware titled "Chrome_Font v7.5.2.exe” downloads to their computers, and they are officially infected.
Schober explained of the popup, "This appears extremely convincing, yet is actually malware,” adding, "It appears credible as it mimics the Google Chrome browser."
He added that users can stay safe from malware by staying vigilant and avoiding download files from unknown sites.
Copyright 2017 Scripps Media, Inc. All rights reserved. This material may not be published, broadcast, rewritten, or redistributed.