Will be integrated into new service called 'Mix' 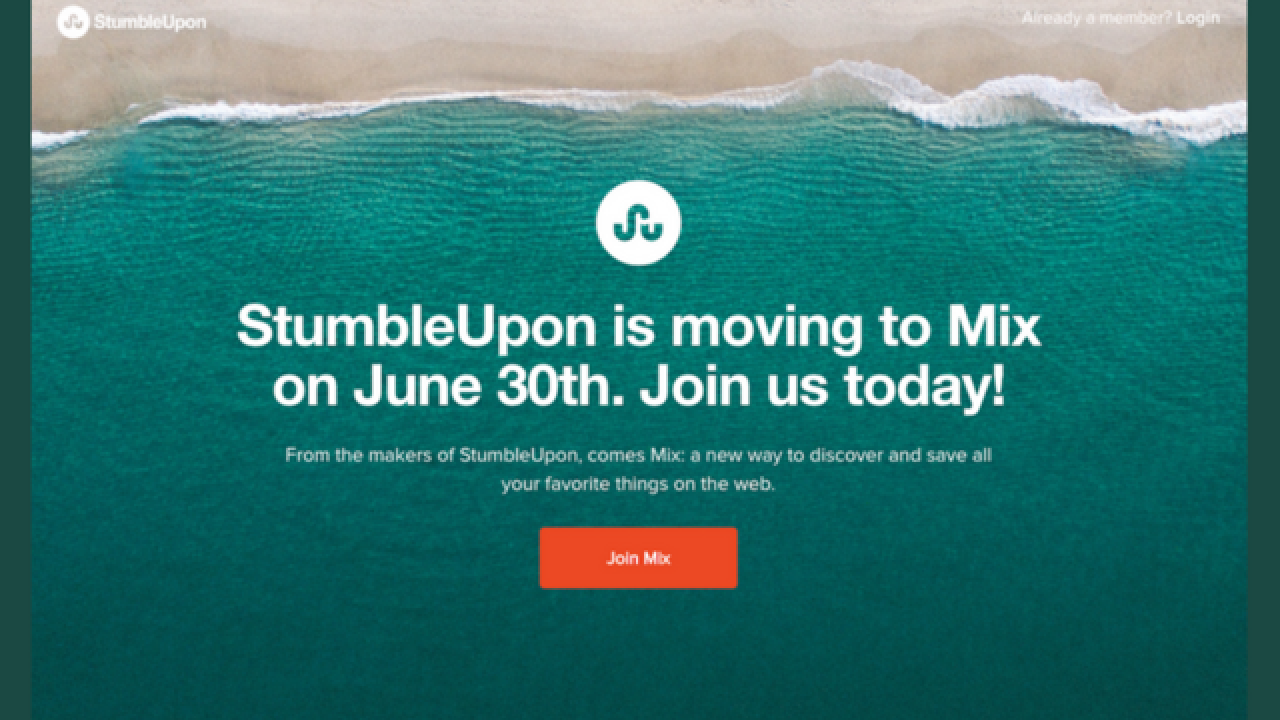 Copyright 2018 Scripps Media, Inc. All rights reserved. This material may not be published, broadcast, rewritten, or redistributed.
<p>StumbleUpon as we know it is shutting down on July 2. (StumbleUpon)</p>

StumbleUpon, a website that helped its users explore the Internet in the early days of social media, will shut down on Tuesday, the site said in an email to users.

The service will be integrated into a new web discovery service called "Mix," according to a release from the company.

Founded in 2001, StumbleUpon allowed users to curate interests and send them to random web pages articles and videos based on those interests. In the early days of the Internet, it quickly established itself as a way for people to discover new online content.

The site was acquired by eBay in 2007 for $75 million dollars, but according to Distilled, the site began experiencing a 70 percent traffic drop off year over year. But after allowing users to use the service without signing up, and a new round of funding, StumbleUpon began to grow again at the turn of the decade.

However, in a discovery landscape dominated by Facebook and Google, StumbleUpon couldn't keep up. On Monday, the site informed its users that the service was shutting down.

Wow, after 16 years, the day has come. Today is the last day that Stumbleupon.com exists online, and as we head into this moment, we want to look back and thank you for making StumbleUpon an internet legend.

Before posts and tweets, before snaps and pins, StumbleUpon was there providing endless internet entertainment with just the push of a button. Because of users like you, we served up nearly 60 billion stumbles to over 40 million Stumblers, and infinite hours of “woah, cool” moments. StumbleUpon was more than just a button. People connected, made friends, found career inspiration, and even fell in love!

This isn’t “goodbye”; it’s more of a “see ya on the other side”. Recently, we’ve shifted our focus to build a new discovery platform with the lessons we learned from StumbleUpon.

Meet Mix! On Mix, you’ll be able to build shareable collections of your favorite finds across the internet: articles, videos, podcasts, and more. As you curate the web, your saves will turn into meaningful recommendations for others in Mix. We hope to make discovery a collective endeavor, helping each other find gems from the depths of the web that we wouldn’t have come across on our own. And you’ll be in good company with your fellow Stumblers that have already given Mix a try — see Tom and Art. Feeling nostalgic? Take a journey back in time with StumbleUpon Time Machine on Mix.

If you haven’t yet, we’re excited for you to try out Mix! Hope to see you on the other side.