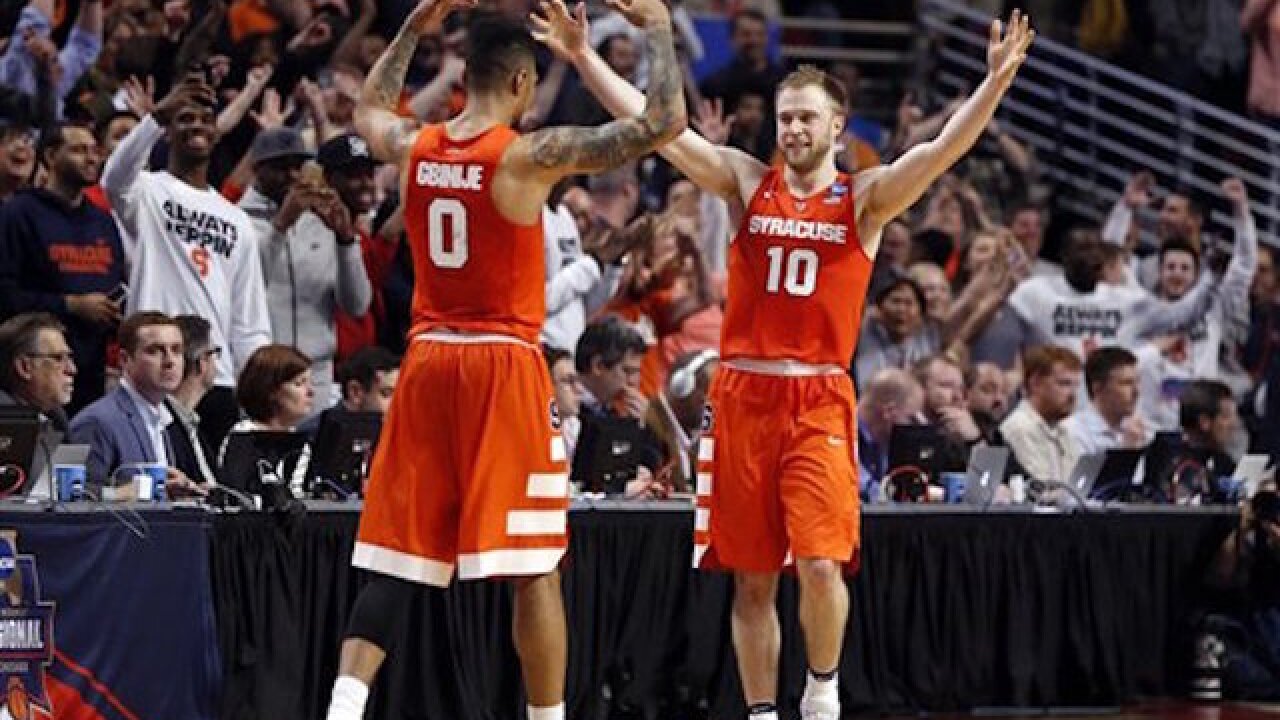 CHICAGO (AP) — Malachi Richardson smiled as he ran up the court while making circles around his eyes with his hands. Houston was right there in front of him.
From the bubble all the way to the Final Four.
Richardson scored 21 of his 23 points in the second half, and Syracuse extended its improbable run with a 68-62 victory over top-seeded Virginia on Sunday.
The Orange were among the last teams to get into the NCAA Tournament after a rough closing stretch, but slipped in as a 10 seed before storming to its first Final Four since 2013 and No. 6 overall. It comes at the end of a challenging season for coach Jim Boeheim, who was suspended for nine games as the result of an NCAA investigation.
"It was a whole team effort and these guys really deserve it," Boeheim said. "We beat a great basketball team. I've never been prouder in all my 40 years as coach of a basketball team as I am of this team tonight."
Syracuse (23-13), which trailed by 16 at the start of the second half, becomes the first 10 seed to make it to the Final Four and just the fourth double-digit seed to accomplish the feat. It's the lowest seeded team to reach the national semifinals since No. 11 VCU in 2011, according to STATS.
Michael Gbinije and freshman Tyler Lydon each scored 11 points for the Orange, who will face the winner of another all-ACC regional final between North Carolina and Notre Dame on Saturday in Houston. Tyler Roberson finished with 10 points and eight rebounds.
"We had a lot of doubters," Lydon said. "A lot of people who believed we shouldn't even be in this tournament. I'm sure there are still a lot of people who think that. But we know what we can do as a team and that's all that matters."
London Perrantes scored 15 of his 18 points in the first half for Virginia (29-8), which blew a 16-point lead in the second half. Malcolm Brogdon, the ACC player of the year, had 12 points on 2-of-14 shooting in the final game of his Cavaliers career.
"It was in our grasp, but credit goes to Syracuse for some of the plays they made," coach Tony Bennett said. "I think some of our points off turnovers probably cost us. We didn't convert on some things, had some errors, but played well enough in stretches."
Syracuse trailed 54-39 before it ripped off 25 of the next 29 points, including 15 in a row. And Richardson led the way, often taking the ball right at Brogdon.
Richardson's driving layup made it 59-58 Orange with 5:47 remaining for their first lead since early in the first half. After Perrantes missed a long 3, Richardson connected from deep and jogged up the court with a huge grin and Texas in his sights as the crowd roared.
"I just had to pick it up," he said. "I wanted to help my teammates out as best I could."
The confident freshman, who scored 21 points in Syracuse's first-round win against Dayton, added another layup for his seventh straight point before Anthony Gill stopped Virginia's drought with a basket inside.
The Cavaliers had a chance to tie in the final seconds after Gbinije went 1 for 2 at the line. But Devon Hall missed a 3-point attempt and Lydon and DaJuan Coleman combined for three free throws to close it out for the Orange.
"It was a great comeback, one of the best I've coached in, any team I've had, in terms of you're playing, I think, a great team," Boeheim said.
Syracuse also trailed in the regional semifinal against Gonzaga, erasing a nine-point deficit in the final 6 1/2 minutes.
Virginia, which beat Syracuse 73-65 on Jan. 24, shot 35.7 percent in the second half, seemingly worn by the Orange's tenacious 2-3 zone. Gill and Mike Tobey finished with 10 points apiece.
"I think they were able to sink in a little bit and not let us get the ball in the middle as much because I don't think we were being as aggressive outside of the zone as we should have been," Brogdon said. "But yeah, I mean, you've got to give credit to them; they made plays."
Associated Press 2016