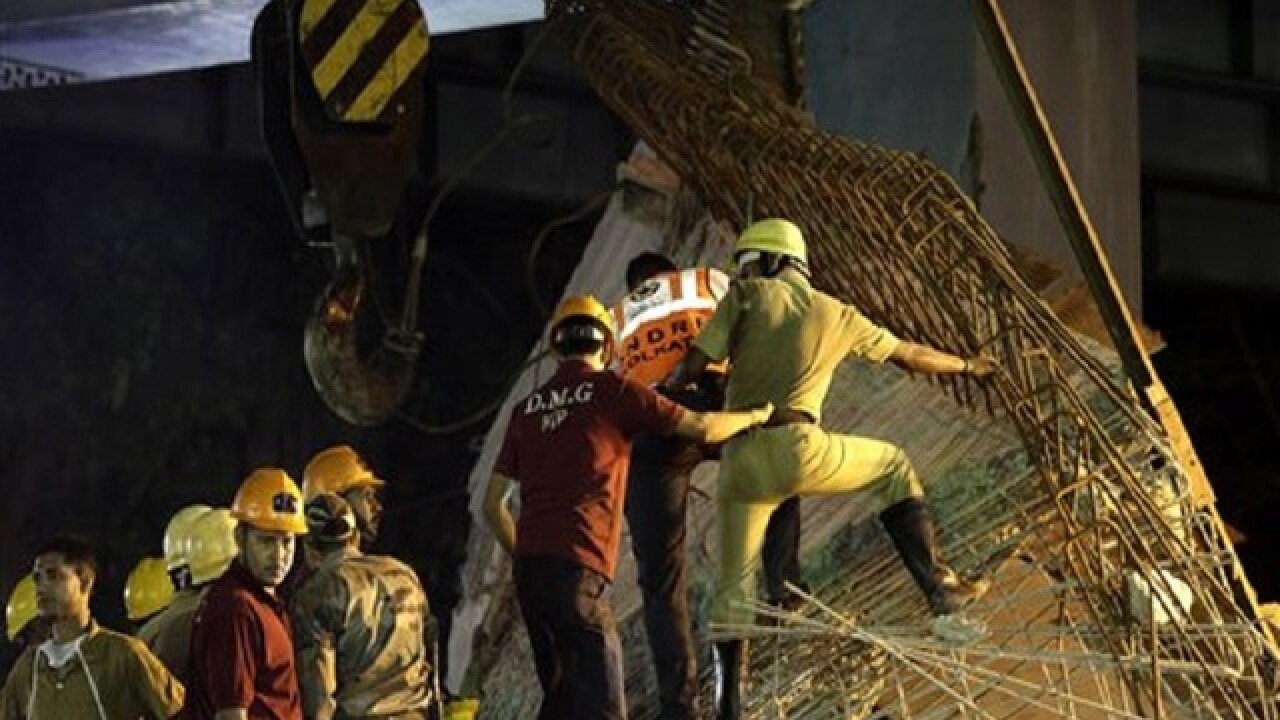 Bikas Das
<p>Indian soldiers and rescue workers work on a partially collapsed overpass in Kolkata, India, Thursday, March 31, 2016. A long section of a road overpass under construction collapsed Wednesday in a crowded Kolkata neighborhood, with tons of concrete and steel slamming into midday traffic, killing several and injuring many. (AP Photo/ Bikas Das)</p>

KOLKATA, India (AP) — Indian police on Friday detained five officials of a company constructing an overpass that collapsed onto a crowded Kolkata neighborhood, killing at least 24 people and injuring more than 80.

Rescuers cleared the crumbled concrete and twisted metal rods a day after the collapse in the crowded area of the eastern Indian city. They have pulled out 67 people alive.

"There is no possibility of finding any person alive," said S.S. Guleria, deputy inspector general of the India's National Disaster Response Force. He said engineers were being consulted about part of the overpass still hanging over the disaster area, after which workers will "slowly start dismantling this particular section to avoid any collateral damage to houses around it."

The five detained employees worked for Hyderabad-based IVRCL Infrastructure Co., which was contracted in 2007 to build the overpass. Police also sealed its Kolkata office.

The officials are being questioned over possible culpable homicide, punishable by life imprisonment, and criminal breach of trust, which carries a prison sentence of up to seven years, police said.

The partially constructed overpass had spanned nearly the width of the street and was designed to ease traffic through the densely crowded Bara Bazaar neighborhood in the capital of the east Indian state of West Bengal. Within hours of concrete being poured into a framework of steel girders on Thursday, about 100 meters (300 feet) of the overpass collapsed.

"I heard an explosion, a solid one," said resident Rabindra Kumar Gupta, who had been home eating lunch. "My apartment shook. The whole building shook. When I looked outside, there was a lot of smoke."

Smashed yellow taxis, a crushed truck, destroyed rickshaws and the bloody legs of trapped people jutted from the fallen girders and concrete.

The construction company was far behind schedule for the overpass.

"We completed nearly 70 percent of the construction work without any mishap," IVRCL official K.P Rao said Thursday. He was not among those detained on Friday. "We have to go into the details to find out whether the collapse was due to any technical or quality issue."

Patients and their relatives crowded the corridors at Marwari Relief Society Hospital, where at least 30 of the more than 80 injured people were still being treated Friday.

Among the injured was ambulance driver Gopal Kanoi, who had stopped for a cup of tea near the overpass when it crashed down around him. He said he rushed around to rescue the injured, including a man trapped in a crumpled rickshaw screaming "Save me!"

He then lost consciousness, having sustained a head injury.

"The public picked me up, moved me out of the way and brought me to the hospital," Kanoi said. "If I had been later by two seconds, I would have been squished under the bridge."

As workers in yellow hard-hats operated huge cranes, bulldozers and other equipment Friday to clear the rubble and pry apart the concrete slabs, crowds of people waited anxiously to see if neighbors and friends had survived. The intersection had been a place where street vendors and service workers regularly plied their trades.

"There used to be a tailor who sat here on this corner. We wonder about him. A cigarettes and tobacco vendor — we knew everyone who used to stay around this crossing," resident Pankaj Jhunjhunwala said.

Rescuers also used dogs and special cameras to locate people who were trapped, he said.

Prime Minister Narendra Modi, who was in Washington at the time of the collapse, said he was "shocked and saddened," according to a message on his Twitter account.