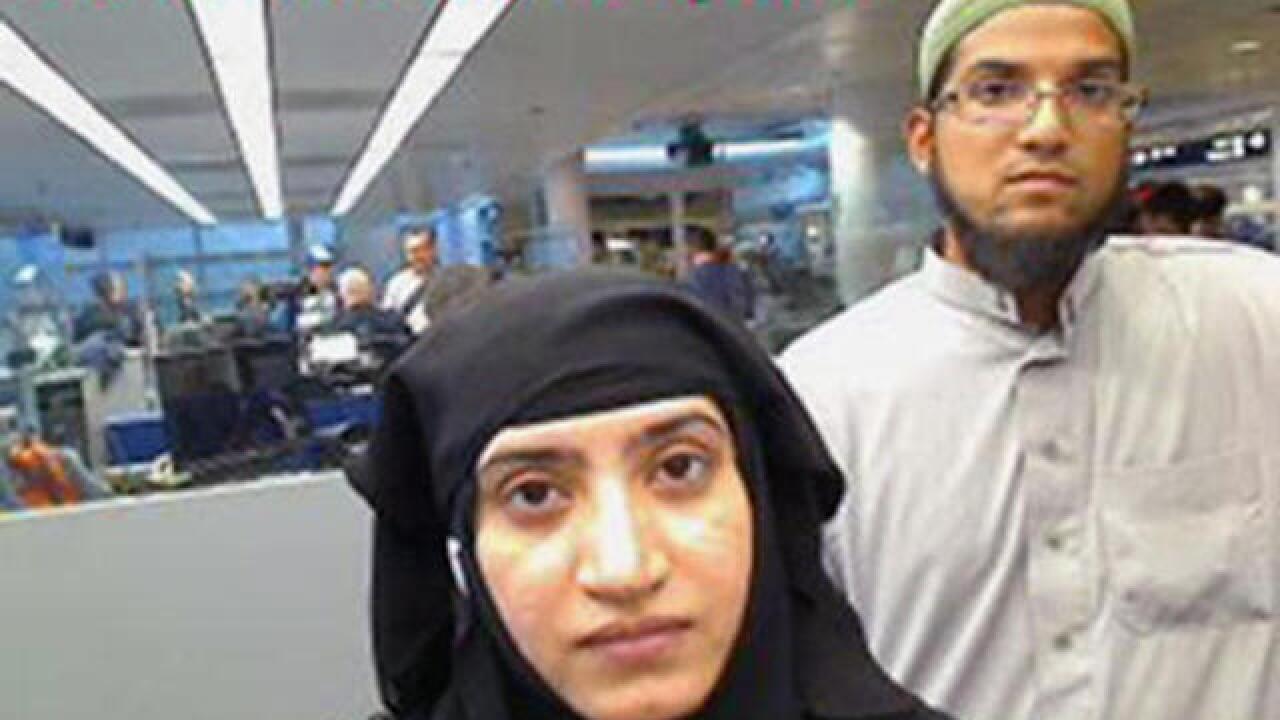 Uncredited
<p>FILE - In this July 27, 2014 file photo provided by U.S. Customs and Border Protection shows Tashfeen Malik, left, and her husband, Syed Farook, at O'Hare International Airport in Chicago. For a crisis counselor who lost a loved one in the San Bernardino terrorist attack, the last six months have been a journey on the other side of crisis. Mandy Pifer's boyfriend, Shannon Johnson, was one of the 14 people killed in the December 2015 mass shooting by Malik and Farook. (U.S. Customs and Border Protection via AP, File)</p>

LOS ANGELES (AP) — An in-depth report of the San Bernardino terror attack released Friday revealed new details about the chaotic massacre, including an effort to stop the shooters and how the husband and wife who carried them out died in a police shootout.

It was not clear if any of the three who tried to stop the attack survived the attack, according to the report by the Police Foundation, a policy study group, and the Department of Justice.

The report based on interviews with over 200 witnesses, law enforcement officers and others provided a detailed account of the pandemonium that unfolded as the Islamic extremists opened fire at a Dec. 2 meeting of the man's colleagues and, minutes later, as police first arrived at the scene.

Syed Rizwan Farook and his wife, Tashfeen Malik, killed 14 and wounded 22 in the massacre at a training event and holiday gathering of the San Bernardino County Health Department, where Farook worked as a food inspector.

Farook had been present at the meeting, but got up and left, before returning a short time later clad in black, wearing a mask and armed with a semi-automatic rifle. His wife was also wearing black and toting an assault rifle.

The first victims encountered by police had been shot outside the Inland Regional Center. One appeared to have been eating lunch at a picnic table and the other was found still holding his cellphone.

Colleagues inside a conference room had heard popping sounds, but many didn't recognize the sound of gunfire until the doors burst open and they saw a man in black start spraying bullets. People ran in horror, some dove to the floor and others fell from the fusillade.

Even then, some weren't sure what was happening, with one county official taking cover and thinking it was the "most glorified training I had ever seen."

"Probably on the second or third clip, it finally clicked that this wasn't an exercise," the official said.

The couple calmly reloaded several times over the course of two to three minutes, and appeared to look for signs victims might still be alive, shooting one or more bullets into those who made a sound or moved.

One injured woman asked a colleague "to call her mother and say goodbye for her," according to a draft of the report obtained by The Associated Press, but not included in the final version because of its graphic nature. The colleague tried to assure her she'd be OK, but the woman replied, "I'm not, I'm bleeding from the mouth" before closing her eyes for good.

The report, which was first written about by The New York Times, gives law enforcement high marks for their response, though it also points out areas of confusion or challenges law enforcement faced as they entered a scene of such horrific bloodshed.

The carnage was described as looking "like a bomb had gone off." Smoke from gunpowder filled the room and water poured down from a fire sprinkler struck by gunfire.

"It was the worst thing imaginable," said a patrol officer, who was one of the first four officers to enter the scene. "Some people were quiet, hiding, others were screaming or dying, grabbing at your legs because they wanted us to get them out, but our job at the moment was to keep going."

The officer regretted having to leave the casualties, but they thought the shooters were still in the building and had to first make sure it was safe.

A rookie officer took a report from one of the survivors, who said that Farook had left the meeting early and that there was something about the shooter's body language that looked similar.

That led officers to Farook and Malik's apartment in nearby Redlands hours later. The two left in a rented black SUV and were trailed by several undercover officers. When a sergeant in a squad car joined in and tried to pull the couple over, his vehicle was hit by gun fire.

Farook then abruptly stopped and he and Malik began shooting at officers in the street, who took cover behind vehicles and returned fire.

The couple shot 81 bullets at police before being outgunned by two dozen officers who fired 440 rounds. One officer was shot in the leg and a deputy was grazed by a bullet.

Farook was struck 25 times, mostly in the legs. Malik was shot twice in the head, and had 13 other wounds.

Police found more than 2,000 rounds of ammo in the vehicle, along with first-aid equipment.

It wasn't all they left behind. Back at the conference room more than six hours after the attack, investigators found three pipe bombs in a bag Farook had left behind. Police now think they were intended to be detonated remotely when first responders aided the victims, but the remote detonating device didn't work.