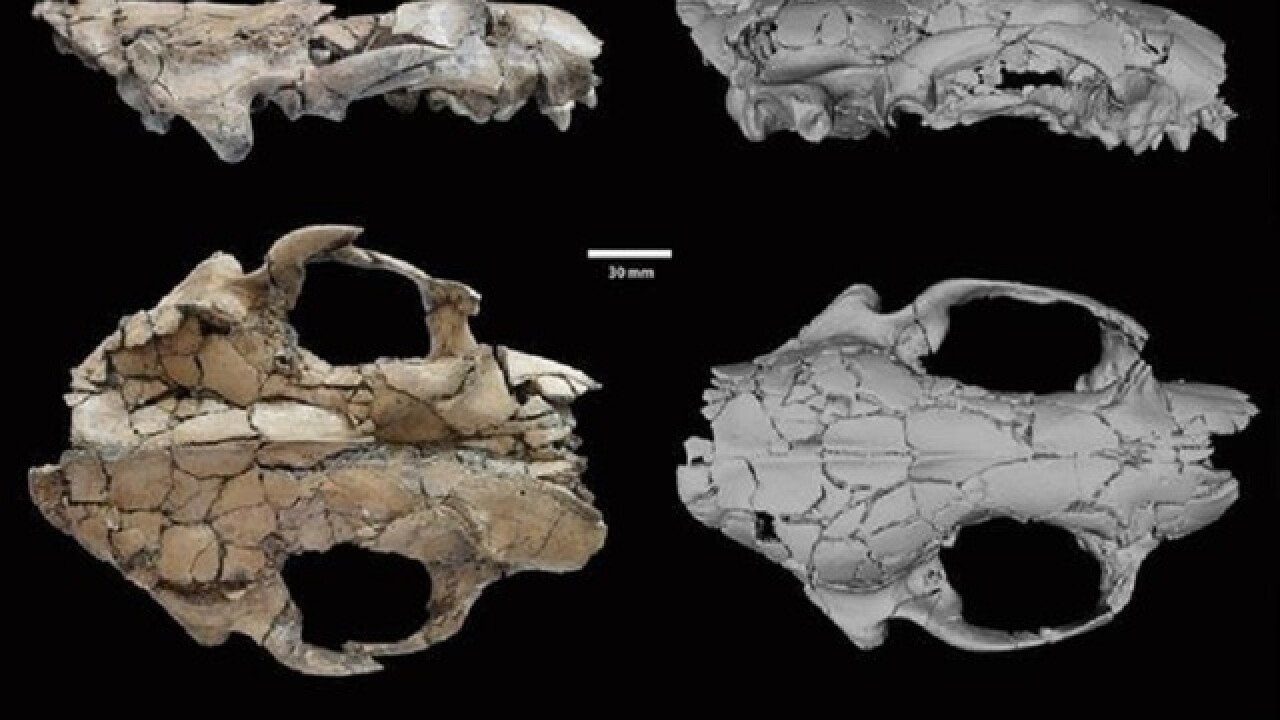 Copyright 2017 Scripps Media, Inc. All rights reserved. This material may not be published, broadcast, rewritten, or redistributed.
Yunnan Relics/Cleveland Museum
<p>A monster otter that roamed Earth six million years ago has been discovered in China. The new species, Siamogale melilutra, lived 6.24 million years ago in the Yunnan Province in China. It weighed approximately 110 lbs and was roughly the size of a modern wolf.</p>

By: Mina Abgoon
Posted at 12:11 AM, Jan 24, 2017
HONG KONG (CNN) -- The modern day otter might not be the most fearsome creature to stalk the earth, but the discovery of a species that lived 6.6 million years ago in southwestern China suggests its ancestor cut a much more intimidating figure.
With "wolf-like" proportions, and weighing roughly 100 Ibs, the creature -- whose skull was excavated in Yunnan province -- would have been twice the size of today's otters.
The newly discovered species, Siamogale melilutra, had large, powerful jaws and enlarged teeth, according to the scientists responsible for excavating and studying a cranium pulled from a geological site in 2010.
"From the beginning of the discovery, we realized that it could be a new species because of its huge size," Professor Ji Xueping told CNN. "I'm not an expert in carnivores, but I knew, when it was taken out of the ground, that this was something new."
Ji led the Chinese field team as a part of a collaboration that included the Yunnan Cultural Relics and Archaeological Institute and the Cleveland Museum of Natural History.
The discovery included an almost complete cranium and lower jaw, which in its fossilized form required virtual reconstruction using CT technology in Beijing.
The findings showed that the animal belonged to one of the otter's oldest and most primitive lineages. The otter family goes back at least 18 million years.
Traits shared with the modern day badger were also discovered, accounting for the species's name: "Melilutra" refers to meles, which is Latin for badger. Their likeness raises questions about the possible existence of a common ancestor.
"It's a funny, semi-aquatic creature, that would be between 1.5 to 2 meters in length," said Ji, who believes that further excavation projects could reveal more creatures of such proportions across China and Asia.
These hulking otters of yore would have fed on large shellfish, crushed between their powerful jaws.
"This finding is significant because it tells us something new about the otter family. But why it's so big? We just don't know - that's a big question for further study," Ji said.
The study was published this week in Journal of Systematic Paleontology.
The-CNN-Wire
™ & © 2017 Cable News Network, Inc., a Time Warner Company. All rights reserved.
Copyright 2017 Scripps Media, Inc. All rights reserved. This material may not be published, broadcast, rewritten, or redistributed.