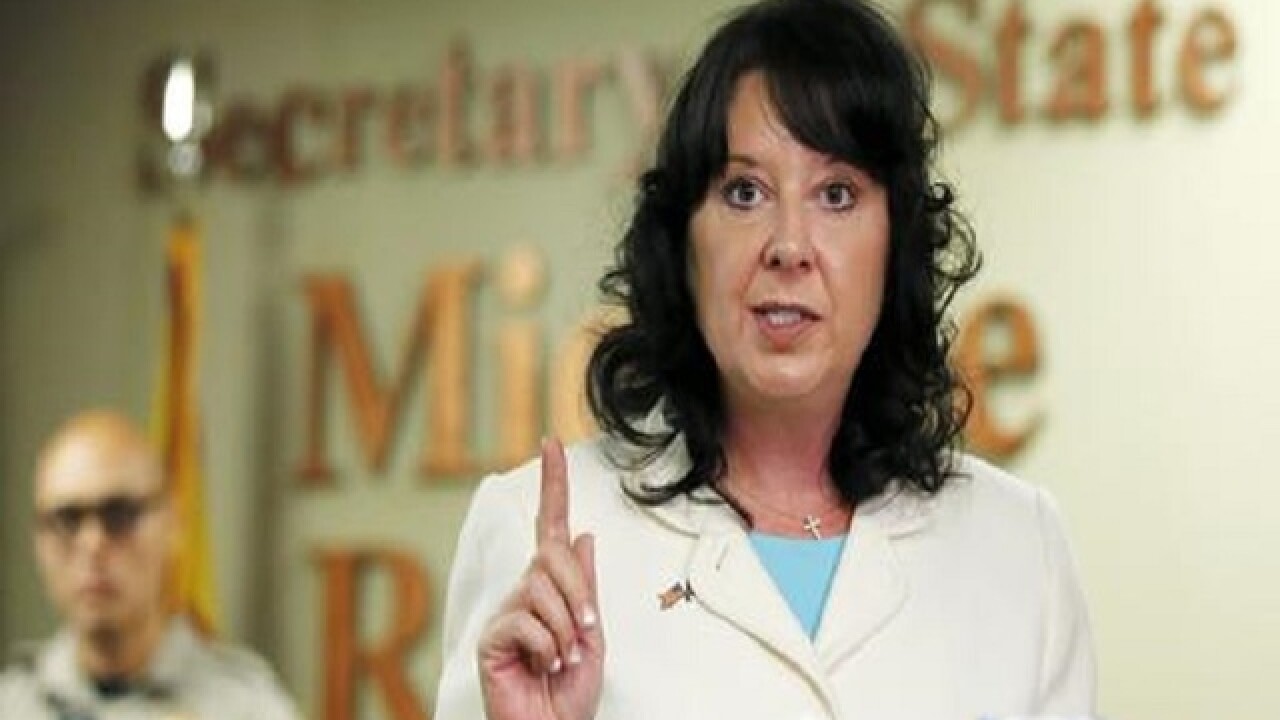 Ross D. Franklin
<p>Arizona Secretary of State Michele Reagan speaks during a news conference after she certified the official canvass results of the March 22 presidential primary, Monday, April 4, 2016, in Phoenix. Despite ongoing concerns of long lines and other problems, Reagan certified the official canvass Monday and said she had no authority to do anything except sign off on the election. (AP Photo/Ross D. Franklin)</p>

PHOENIX (AP) — Five polling places in metro Phoenix still had voters in line after midnight during Arizona's botched presidential primary two weeks ago, including one location where the final ballot was cast at nearly 1 a.m., according to county records.
The Associated Press obtained a document from the Maricopa County Recorder's Office that shows the time when each of the 60 polling sites closed in the March 22 primary, providing a more complete picture of the abysmal wait voters experienced.
Votes were still being cast past 10 p.m. in 20 of the 60 locations, meaning residents had to wait at least three hours to choose a candidate in the White House race. The polls closed at 7 p.m., but anyone who was in line at that point could vote.
One location in Phoenix saw its last voter just two minutes before 1 a.m. Fourteen of the 20 sites that had people voting past 10 p.m. were in Phoenix or its western suburbs, while six were in the eastern part of the Phoenix metro area.
The Department of Justice has launched an inquiry into the wait times and whether they violated voting rights laws.
A letter from Justice Department Voting Section Chief Chris Herron released Monday by the Maricopa County Recorder's Office asked for information on 10 specific items, including a description of how county election officials determined how many polling places were needed on March 22 and whether potential impacts on minority voters were examined. The department declined further comment on its inquiry.
Citing budget issues, Maricopa County cut the number of polling places from 200 in 2012 to just 60 this year.
The Justice Department request was disclosed as Arizona Secretary of State Michele Reagan certified results of the presidential primary.
As the state's top election official, Reagan didn't have the ability to reject the official canvass from the 15 counties, despite her own acknowledgment of problems that saw some voters incorrectly left off rolls. The certification does, however, clear the way for any possible court challenges.
Reagan said her office and the Legislature may consider reviewing proposed changes in the way counties run future elections.
Proposed changes to the way the state ran its elections previously required federal approval, but a 2013 U.S. Supreme Court decision threw out that portion of the Voting Rights Act. The provision required Arizona and all or part of 14 other states to get Justice Department approval, or "pre-clearance."
Reagan has sidestepped questions about why she didn't review the changes in the presidential primary herself in the absence of federal oversight since the other parts of the law remain in force.
Monday's official canvass opens a five-day window for a challenge, something an attorney for Democratic Sen. Bernie Sanders is considering. Attorney Chris Sautter said last week that there was evidence that an unknown number of voters had their ballots thrown out because of problems with voter rolls.
"What's at stake are delegates," Sautter said. "Obviously the outcome of the election for the primary is not going to be changed, but delegate counts could be changed."
Sanders lost to Hillary Clinton in the primary, but because Democrats allow delegates to their national convention proportionally, challenging the results could conceivably add to the number won by Sanders. The state has 10 superdelegates and 75 at-large allocated in the primary.
Maricopa County threw out more than 20,000 provisional ballots, and Sautter said he's collected complaints from some voters who believe they should have been on the Democratic voter rolls. Independents weren't allowed to participate.
Republican Donald Trump won his party's election and the 58 delegates are committed to vote for him on the first convention ballot.
Associated Press 2016