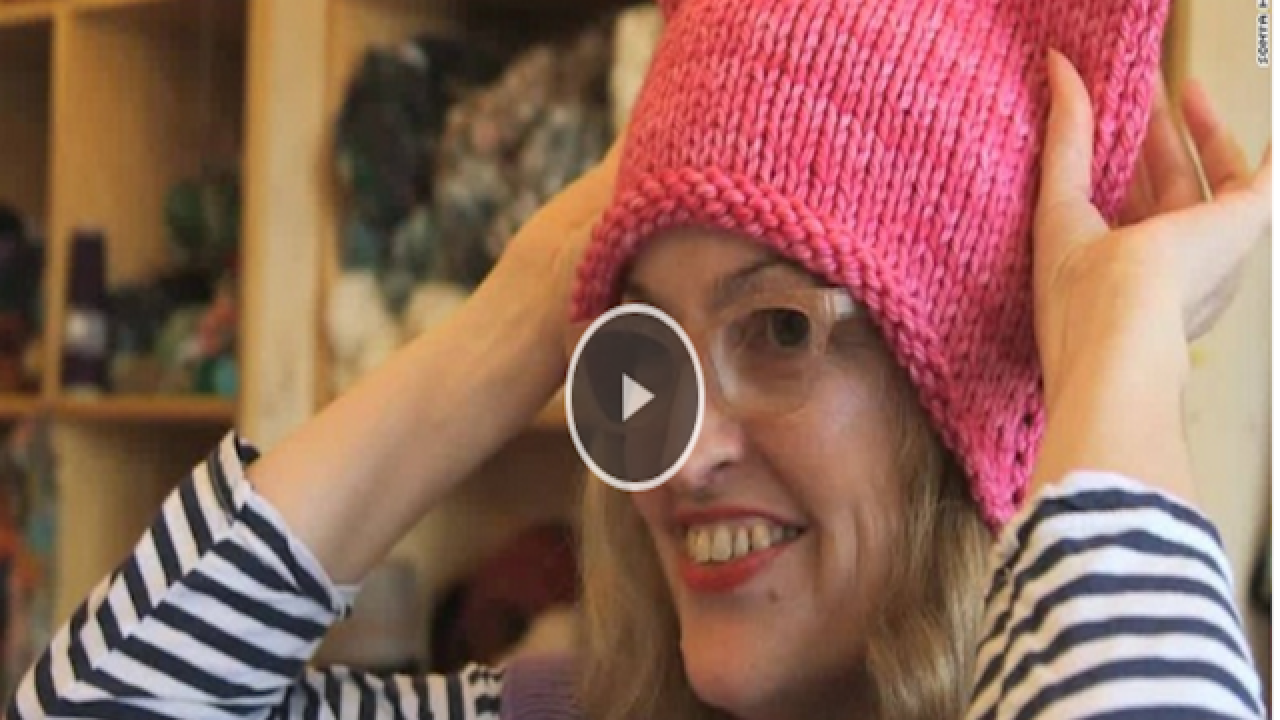 LOS ANGELES (CNN) -- It begins with a bundle of pink yarn, a set of knitting needles, and a woman who wants to be heard.

The concept is simple: Create a "sea of pink" at the Women's March on Washington.

Krista Suh and Jayna Zweiman are the women behind the Pussyhat Project, a grassroots movement to flood the National Mall with a million handmade, cat-eared knit hats, dubbed "pussyhats," in a show of solidarity and support for women's rights.

The two friends had begun taking knitting classes at The Little Knittery in the Atwater Village neighborhood of Los Angeles last year. The cozy space brims with colorful yarns, and warm scarves. For these women, it provides a peaceful, safe sanctuary -- a place where thoughts and ideas can be shared without fear of judgment.

"Part of knitting is that you have this time, and breath to be able to really have conversations," Zweiman said.

As then-candidate Donald Trump faced allegations of sexual misconduct -- which he has denied -- and as the election drew near, they say those conversations became even more critical for their small community. Pretty quickly, the potential impact of a Trump presidency on gender and women's issues became the No. 1 topic around the knitting table.

And when the women woke up to Trump's victory on Nov. 9, Suh and Zweiman decided they needed a platform to make their voices heard. The Women's March on Washington became that platform.

"The idea is both a play on pussyhat, pussycat, and also references the hot mic from the 'Access Hollywood' video. It does reference Donald Trump and those comments, but it's also so much more," said Zweiman. "It's reappropriating the word 'pussy' in a positive way. It's a pussyhat -- one word. This is a project about women supporting women."

Suh and Zweiman presented the idea to their knitting teacher, Kat Coyle, owner of The Little Knittery. She immediately jumped on board.

"I designed a hat that was simple enough that beginners could make it, or modify it, and make it their own," Coyle said. "We put together the website, and then I got on Instagram, let my knitting community know, and it just took off from there."

Zweiman estimated that well over 60,000 hats were made by the end of December. Submissions arrived from all 50 states and as far away as France and New Zealand. The project has a practical element to it, too. Suh, who's accustomed to mild California winters, knew she would need something warm to ward off the crisp East Coast air at the march. The obvious choice seemed to be a fluffy, knit skullcap. Add some kitten ears, and the pussyhat was born.

The Pussyhat Project launched the day after Thanksgiving. Using the hashtag #PussyHatProject, the concept caught on quickly. Thousands of men, women and children began crafting their own projects, and before sending them off for delivery to march participants in Washington, they flooded Facebook, Twitter and Instagram with photos, showing groups of friends sporting pink on the beach, dogs and cats wearing smaller versions, and mirror selfies featuring elaborate knit hats.

This week at The Little Knittery, the front door swings open rhythmically, with a steady stream of participants, including avid knitters and beginners dropping off hats and those traveling to the US capital to march picking up hats.

"It became evident how quickly things were going to turn around for women's health issues and women's rights," said Lynne White, who is bringing four hats to friends in Washington. "It's a phenomenal idea they came up with, based on a statement (Trump) made years ago. It's a great way for everybody to show that it's unacceptable behavior to speak that way about women, or to speak that way about anybody."

Each volunteer is encouraged to write a special message to the anonymous marcher who receives the hat. The label includes a space for an email address where the marcher can send photos of their experience.

The Pussyhat Facebook page is filled with messages from knitters who put their Pussyhats in the mail to Washington. "This one's from Laura," Zweiman read. "As a survivor of sexual assault, it's important to me that it's taken seriously as a crime, and not something that you can just brush off and forget about. This is why I march."

Colin Campbell stopped by to find Pussyhats for himself, his wife and young daughters. As luck would have it, volunteer Makiko Ushiyama was seated at the table, finishing up a set of hats. She handed Campbell the bundle, and as his girls tried them on, he read the special message Ushiiyama had written on the label. "This hat was made by Makiko in Los Angeles, California," he read. "A woman's issue I care about is that a woman's rights are human rights. I care about them all. Thank you for marching."

Although the Pussyhat Project's efforts are mostly focused on the Women's March on Washington, organizers are encouraging women to make hats to wear to sister marches and like-minded events being held around the nation this weekend.

The message is one of unity.

"This is an opportunity to reach out -- perhaps to someone you never met before, to share with them how you feel as an individual," said Zweiman. "The marcher can then reach back and thank you for the hat ... for the gift."