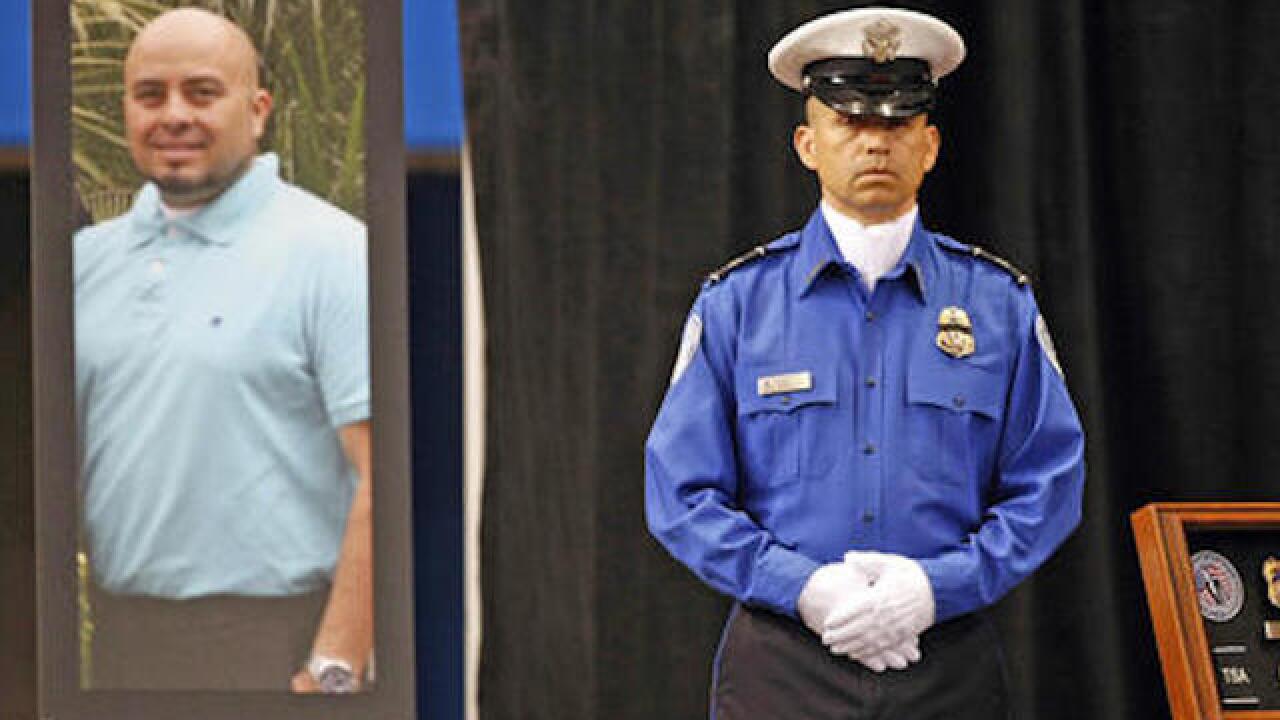 Copyright Associated Press
Al Seib
<p>FILE - In this Nov. 12, 2013 file photo, a Transportation Security Administration officer stands in front of a portrait of slain TSA officer Gerardo Hernandez during his public memorial at the Los Angeles Sports Arena. Paul Ciancia, the gunman who killed the federal security officer at Los Angeles International Airport and wounded three other people during a 2013 rampage, faces sentencing for murder and other crimes. (Al Seib/Los Angeles Times via AP, Pool, File)</p>

LOS ANGELES (AP) — The gunman who killed a federal security officer and wounded three other people during a rampage at Los Angeles International Airport has shown no remorse and clings to the beliefs that led to the violence in 2013, prosecutors said in advance of his sentencing Monday.

Ciancia "plotted to commit mass murder at one of the nation's foremost transportation hubs, murdered a beloved public servant in cold blood, seriously injured two other federal officers whom he shot and was attempting to kill, shot and injured a passenger who was traveling to attend a wedding, and terrified hundreds of other passengers and employees at Los Angeles International Airport who feared for their lives and the safety of their families," Assistant U.S. Attorney Patrick Fitzgerald wrote in sentencing papers.

Fitzgerald is asking that Ciancia be sentenced to an additional 60 years even though it would have no practical impact on his term. He also asked that the court not recommend that Ciancia, who has a combination of mental disorders and has been suicidal in the past, be sent to a federal medical facility instead of prison.

The probation office made that recommendation in a sealed presentencing report the prosecutor referenced, but Fitzgerald said it would be inappropriate given Ciancia's crimes and the threat he poses to federal employees. That determination should be made by the federal Bureau of Prisons, he said.

Fitzgerald said the bureau needs to protect its "personnel from a prisoner who killed a federal official, attempted to kill many more, has shown no remorse over his conduct, and continues to harbor the same beliefs that led him to commit his crimes."

Ciancia, 26, an unemployed motorcycle mechanic from New Jersey, pleaded guilty two months ago to murdering Transportation Security Administration Officer Gerardo Hernandez and to 10 other charges for the attack driven by his anger over airport security measures.

Ciancia shot and wounded TSA officers Tony Grigsby and James Speer as they ran from a screening checkpoint, and he struck passenger Brian Ludmer, who had been in the screening area, in the calf.

Ludmer, a high school theater technical director at the time, wrote a letter to the court saying he could no longer walk without pain or work in the same way, and his outlook on life has been altered. He's lost his sense of security, is anxious in crowds and feels "utterly vulnerable in the world around me."

Ludmer has nothing to say to Ciancia, but he noted the crimes were another example where warning signs of a killer's mental illness went unheeded and didn't prevent him from buying an assault rifle.

"I'm mad at the system that failed him. That is failing all of us," Ludmer wrote. "If cases like his are passing by without any red flags, if guns and ammunition can be sold to people without even checking for any such flags, then of course someone like him would do something like this."

The pale, thin Ciancia expected to die in the attack and left behind a note venting about unconstitutional searches. He wrote that the TSA treated Americans as terrorists, and he intended to strike fear in their hearts.

"I want it to always be in the back of your head just how easy it is to take a weapon to the beginning of your Nazi checkpoints," he wrote in the note signed with his name and "Pissed-off Patriot." ''If you want to play that game where you pretend that every American is a terrorist, you're going to learn what a self-fulfilling prophecy is."

Ciancia's lawyers didn't return requests for comment. Their sentencing brief was sealed, so it was unclear what pitch they would make to Judge Philip Gutierrez.

Regardless of a sentence that carries no parole option, Ciancia apparently still thinks he may one day be released.

In a court filing, one of his lawyers noted: "Ciancia believes he will get out of prison when the revolution begins."