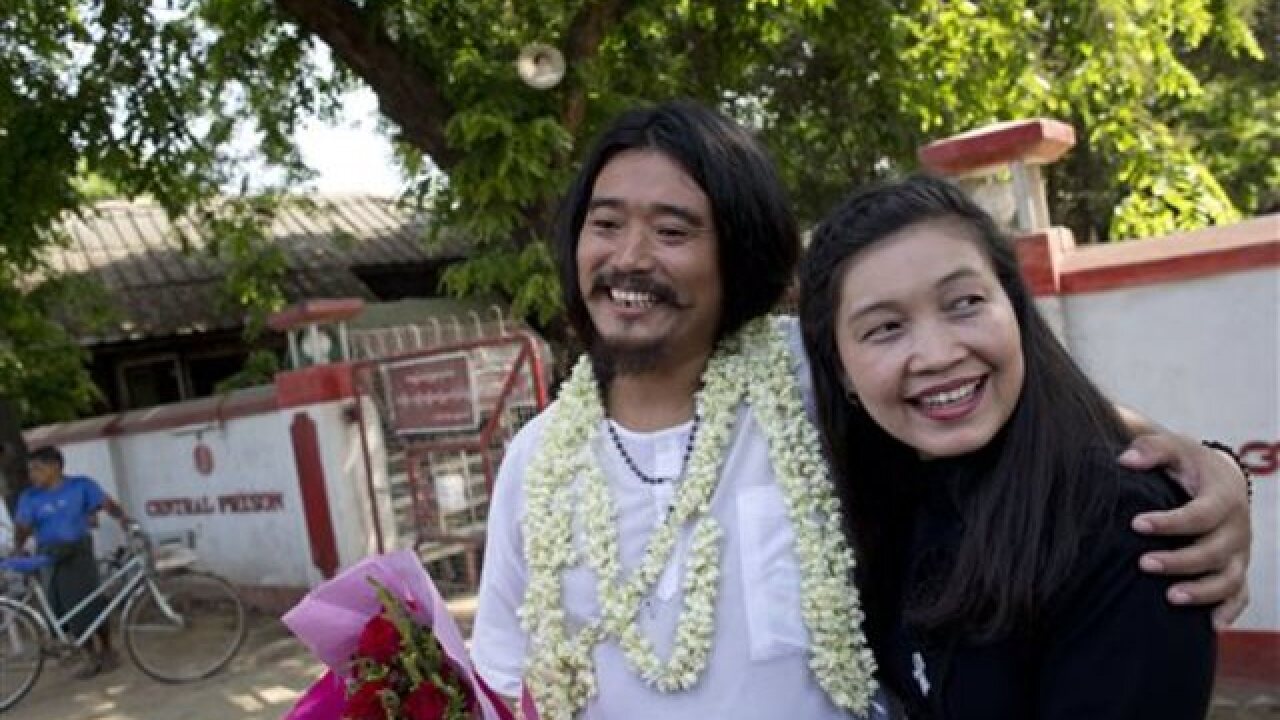 By: Associated Press
Posted at 2:04 AM, Apr 01, 2016
YANGON, Myanmar (AP) — A prominent political prisoner was released Friday after he finished his six-month jail sentence, coincidentally on the day that Myanmar's new, democratically-elected government began working.
Patrick Kum Ja Lee's release was on schedule and not ordered freed by the new government. But it serves as a reminder that President Htin Kyaw will soon have to confront the military to free scores of other political prisoners still in jail for speaking out against its rule. Many are supporters of Nobel laureate Aung San Suu Kyi, the force behind the new government.
"I've seen many political activists who are imprisoned by the oppressive laws of the previous government," said Patrick as he walked out of the prison gates, where he was met by his wife, May Sabe Phyu, another human rights activist. "I want the new government to be able to release all the political prisoners."
Patrick, an ethnic Kachin, was arrested in October and sentenced to six months in prison for writing a social media post that was considered offensive to the military commander, Senior Gen. Min Aung Hlain.
Amnesty International recently called on the new government to work to immediately release all political prisoners jailed by the military that has been in power since 1962, and by a subsequent pro-military, quasi-civilian government.
The military loosened its grip on power in 2010 and allowed free elections in November 2015, which Suu Kyi's National League for Democracy swept, allowing it to form a government on Thursday.
Suu Kyi has pledged to release all the remaining 100 or so prisoners but whether that pledge is even practical remains to be seen. The military still controls some key institutions including the Home Affairs Ministry, which runs the Corrections Department. Under the Constitution the president is required to consult the ministry, run by a former general, in order to grant amnesties.
"Aung San Suu Kyi used to say, 'The truth shall make you free,'" said Patrick, "and I hope that really happens to all the political prisoners under her government."
Scripps Only Content 2016