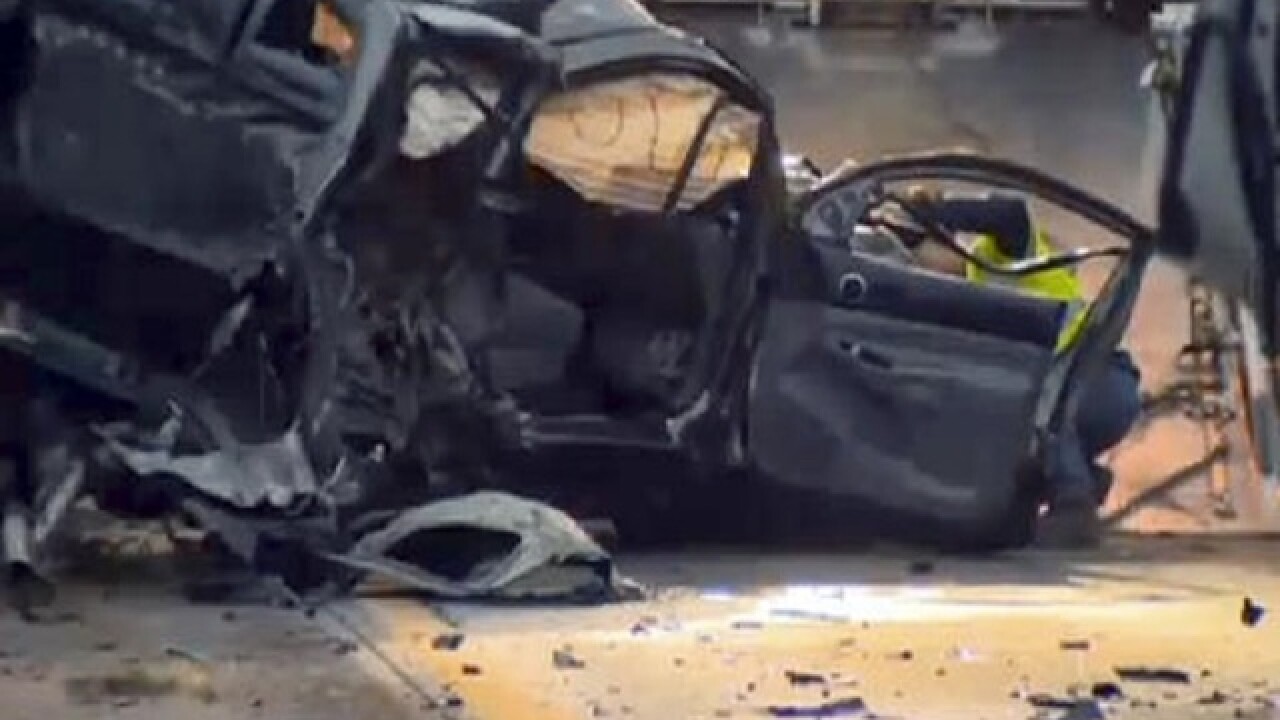 <p>In this still image from video provided by WCAX-TV, a worker attaches a wrecker cable to a vehicle on Interstate 89 early Sunday, Oct. 9, 2016, in Williston,Vt., after a wrong-way driver caused a crash just before midnight that killed multiple people, before stealing a police cruiser, striking several vehicles and injuring several people. (WCAX-TV via AP)</p>

WILLISTON, Vt. (AP) — A man driving the wrong way on an interstate highway in Vermont spawned several crashes that left five teenagers dead, an unknown number injured and at least two vehicles in flames, including a stolen police cruiser, state police said Sunday.
A Vermont school principal said the five teenagers, who were all riding in the same vehicle, were high school juniors. Four were students at Harwood Union High School, co-Principal Amy Rex said, and a fifth student attended a different school.
"This is an unprecedented tragedy; we have suffered a tremendous loss," Rex said. "These students were vibrant members of our school community, actively involved and all with a promise for a bright future."
The high school opened Sunday and will be open Monday for anyone wanting to meet with a crisis team.
Emergency dispatchers started getting calls about a vehicle traveling north in a southbound lane of the interstate late Saturday. State and local police officers tried to locate the vehicle, but soon began getting reports of the crash.
A vehicle was in flames when a Williston officer arrived at the scene. He grabbed a fire extinguisher before pulling a female victim away from the burning vehicle, authorities said.
As the officer tried to extinguish the fire, a man took the officer's police cruiser and began speeding away. When a Richmond police officer tried to stop it, the driver turned the cruiser around and began heading north in a southbound lane, back toward the crash scene, police said.
The cruiser struck seven vehicles. The driver, identified by police as 36-year-old Steven Bourgoin, was thrown from the cruiser, which also burst into flames. Police had not determined whether Bourgoin was the driver who caused the initial crash.
Bourgoin was taken to the University of Vermont Medical Center, where spokesman Mike Noble said he was listed in critical condition. It's unclear if Bourgoin has an attorney.
Several people injured in crashes caused by the cruiser were taken to the hospital, but Noble could not say how many were treated. Police said none of the injuries appeared to be life-threatening.
Paul Swann, of Waterbury, was headed home when he came upon the scene of the first crash. He told WCAX-TV there was debris everywhere and he heard people yelling and screaming before he saw the police cruiser drive away. It returned several minutes later.
"The only thing I could do was try and yell and just gasp as this thing came flying in," Swann said. "I couldn't even believe what I was seeing when the cruiser came back in in that high rate of speed and just no brakes, no nothing."
Copyright 2016 The Associated Press. All rights reserved. This material may not be published, broadcast, rewritten or redistributed.