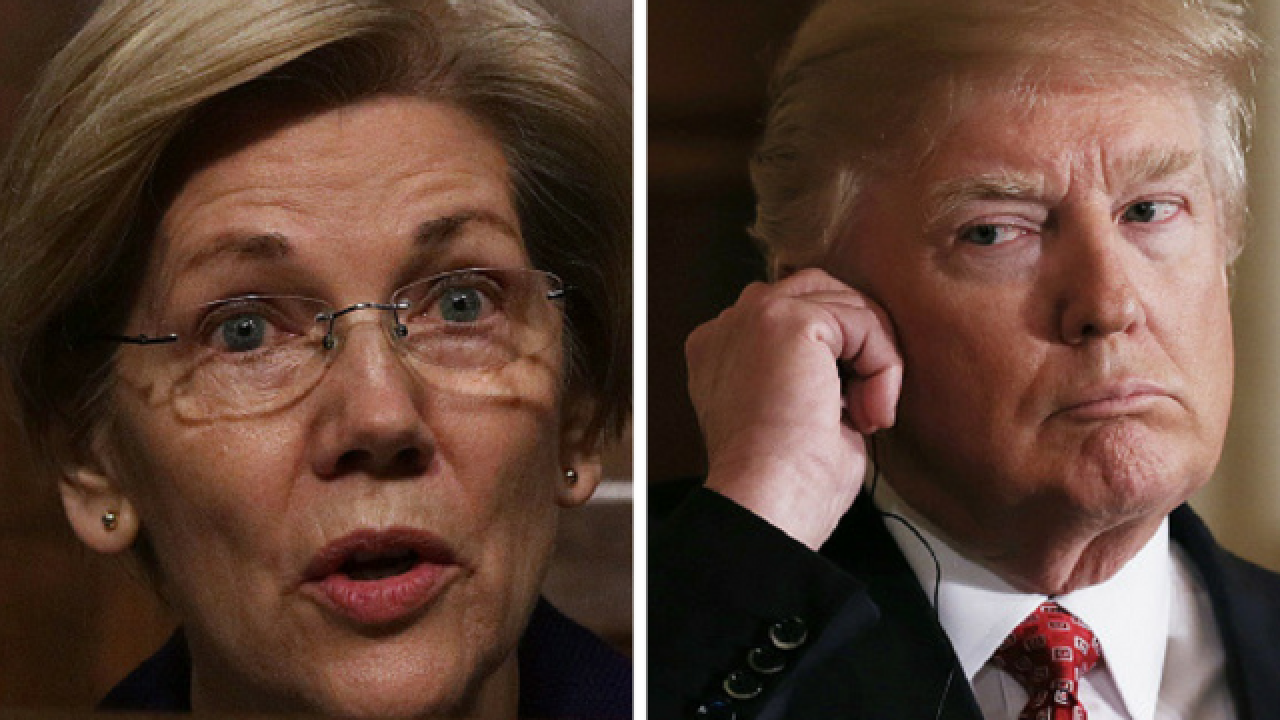 Copyright 2017 Scripps Media, Inc. All rights reserved. This material may not be published, broadcast, rewritten, or redistributed.
<p>Donald Trump referred to Sen. Elizabeth Warren as "Pocahontas" in a meeting with Democrats earlier this week, CNN reports.</p>

WASHINGTON (CNN) -- President Donald Trump taunted Democrats by telling them "Pocahontas is now the face of your party" -- his insult of choice for Sen. Elizabeth Warren -- during a meeting with senators earlier this week, sources told CNN.

The President also used the Thursday meeting at the White House to again surface unfounded claims of voter fraud during the 2016 presidential election.

The sources said the Warren moment came up in the context of the Trump's impromptu analysis of the state of the Democratic Party. Trump made his comments in what appeared to be a reference to Warren's criticism of Attorney General Jeff Sessions during his confirmation process. Her comments prompted Republicans to invoke an arcane rule to cut her off.

The moment galvanized Democrats and has elevated Warren's standing among progressives.

Trump used his pejorative campaign nickname for Warren -- a reference to her claims of having Native American ancestry -- several times during the meeting, which one source described as "equal parts bizarre and completely awkward."

At one point, Trump said the only reason Warren claimed Native American heritage was "because she has high cheekbones," one of the sources said.

The White House and Warren's office haven't responded to a CNN request for comment. The story was first reported by Politico.

Three sources familiar with the meeting also said Trump spoke about his baseless voter fraud claims at the same meeting.

The sources said Trump complained about thousands of people being bussed from Massachusetts to vote illegally in New Hampshire, a state he narrowly lost. The comments were prompted by the presence of former Sen. Kelly Ayotte, a New Hampshire Republican, who attended the meeting because of the role she is playing helping Judge Neil Gorsuch win confirmation to the Supreme Court, something he thanked her for in the meeting.

In a teasing and lighthearted way, Trump said to Ayotte, "I wish you had endorsed me like you endorsed him," referring to Gorsuch and Ayotte's distancing of herself from Trump late in his controversial campaign.