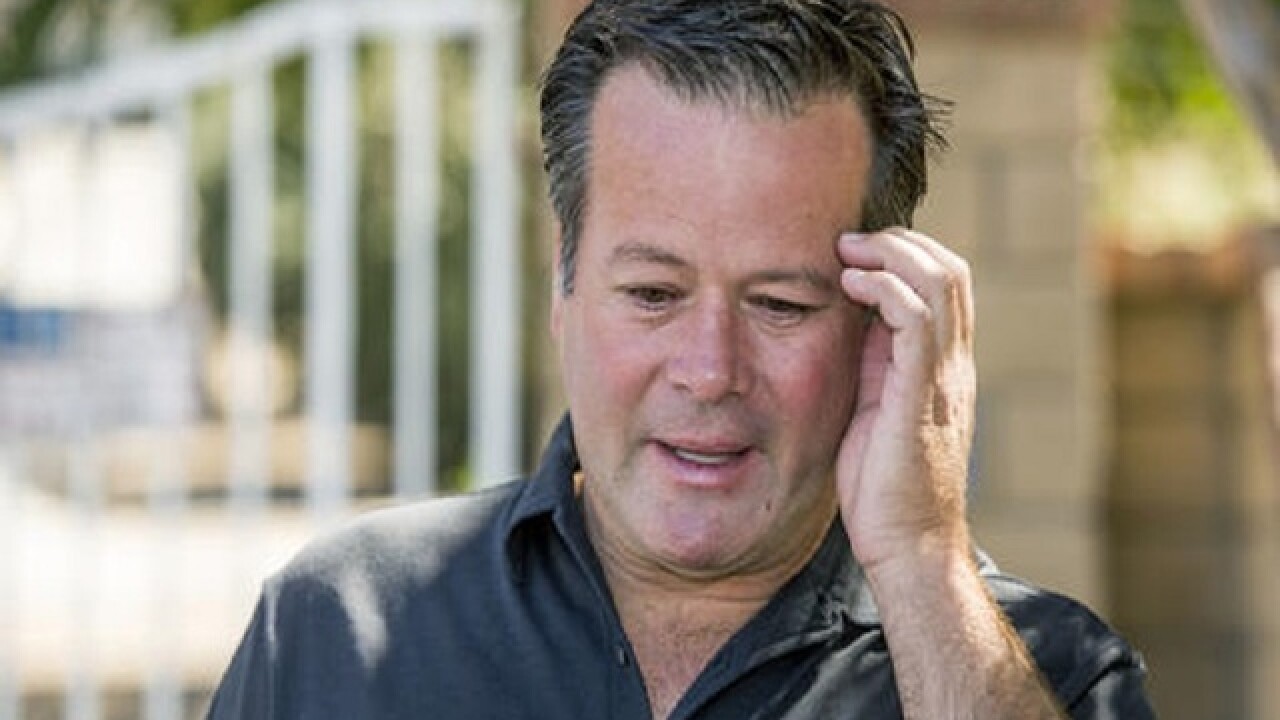 Damian Dovarganes
<p>Former NASCAR racer Robby Gordon makes a statement to members of the media gathered outside his home in Orange, Calif., on Thursday, Sept. 15, 2016. Gordon said his family is in shock and grieving the loss of his father and stepmother, who were found dead inside their Southern California home. (AP Photo/Damian Dovarganes)</p>

ORANGE, Calif. (AP) — The father of former NASCAR driver Robby Gordon strangled his wife then shot himself in their Southern California home, police said Thursday.
The deaths of Robert Gordon, 68, and Sharon Gordon, 57, were an apparent murder-suicide, Orange police Lt. Fred Lopez said a day after the bodies were found. No further details on the motive or circumstances were released.
The couple were the father and stepmother of ex-NASCAR star Robby Gordon, who fought back tears and expressed disbelief Thursday outside the home on a Southern California hillside where he grew up and developed his love of racing.
"I'm so sad, and I can't believe it," the racing star said outside the house. "I grew up on this property my whole life."
Robby Gordon recalled how his father, a racer known as "Baja Bob" in the motorsports community, instilled in him a love for competition and motorsports in the Orange County neighborhood, where many residents own horses and dirt riding trails line the suburban streets.
Gordon said he previously lived in two different houses on the property, and had given his father the home 30 miles (48.3 kilometers) southeast of Los Angeles where police discovered the bodies Wednesday after receiving a 911 call from a neighbor making a welfare check at the request of relatives.
Robby Gordon told the Orange County Register that family members had become concerned when his father missed a doctor's appointment.
The younger Gordon currently races in an off-road series he created in 2013 called Speed Energy Formula Off-Road, following the path of his father.
The elder Gordon started out in horse racing at the local track in Los Alamitos, California, before getting into auto racing.
"He taught me at a young age that one horsepower wasn't going to be enough — go do something different," Gordon recalled his father saying. "And I was fortunate enough to do something different."
Residents in the upscale neighborhood shared stories about the couple's friendly ways — swapping jokes with neighbors, gifting tickets to racing events and delivering feed personally to local equestrians.
"I can still see them walking hand in hand, walking their dogs down the street," said John Reina, who lives across the street. "To kind of wrap your head around this tragedy is very hard to do."
Robby Gordon said he would speak about the deaths in more detail once authorities conclude their investigation.
"The truth will come out, what went down there," he said.
Racer Dale Earnhardt Jr. tweeted that he was praying for the Gordon family. "Hope they find strength and support," he said.
"Heartbreaking news this morning. Thinking of the Gordon family and friends," NASCAR star Jimmie Johnson said on Twitter.
Gordon, 47, has raced on numerous racing circuits, from NASCAR to IndyCar to Champ Car and IROC.
Known for his aggressive style, he earned three wins in parts of 19 seasons in what is now the NASCAR Sprint Cup. He was a full-time driver early last decade and finished a career-high 16th in the points standings in 2003 driving for Richard Childress Racing. Gordon last raced in the Sprint Cup in 2012.
Gordon is one of only four drivers, joining John Andretti, Tony Stewart and Kurt Busch, to compete in the Indianapolis 500 and NASCAR Coca-Cola 600 on the same day. He nearly won the 1999 Indy 500 before running out of fuel in the closing laps.
Gordon said an event featuring his off-road racing team scheduled for this weekend in Orange County will go on as planned.
Gordon's sister, Beccy, is married to 2014 Indianapolis 500 winner Ryan Hunter-Reay. The driver tweeted Wednesday that his wife had given birth to a boy. Hunter-Reay would appear as scheduled in a weekend race in Sonoma County, Gordon said.
Copyright 2016 The Associated Press. All rights reserved. This material may not be published, broadcast, rewritten or redistributed.