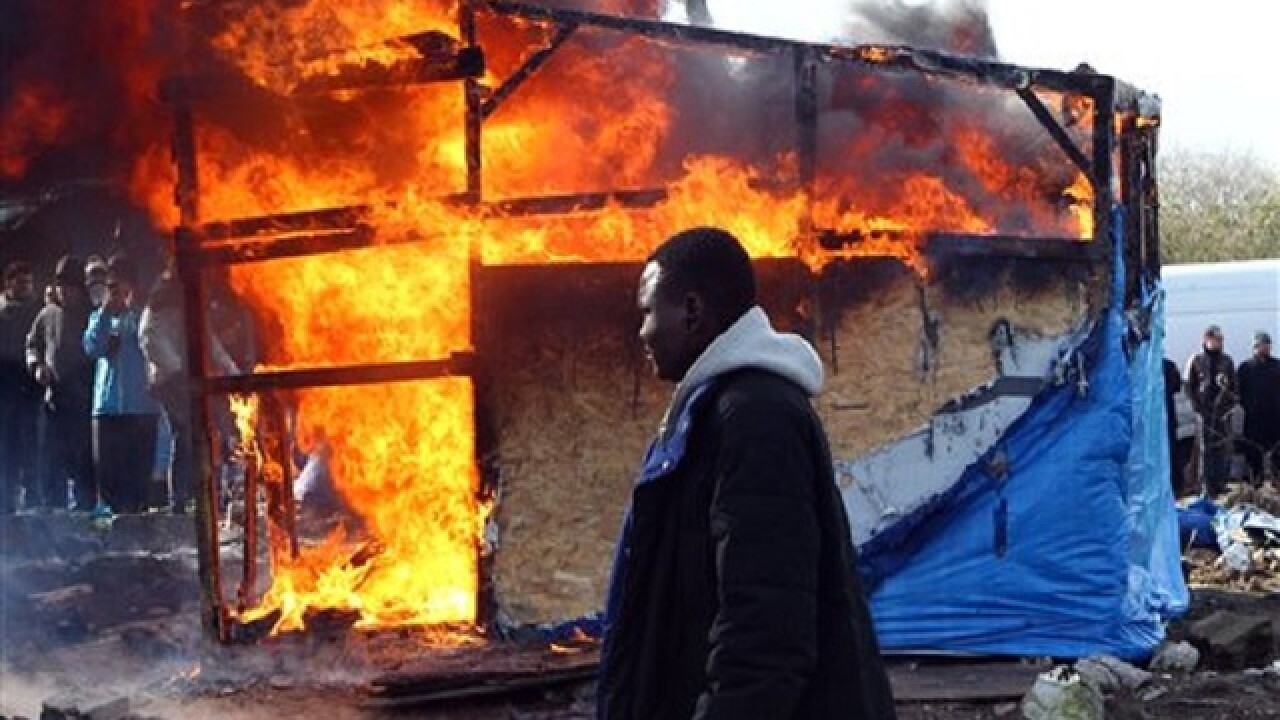 Copyright 2018 Scripps Media, Inc. All rights reserved. This material may not be published, broadcast, rewritten, or redistributed.
Michel Spingler
FILE - In this Thursday, March 3, 2016 file photo, a migrant walks past a burning dwelling in the makeshift migrants camp near Calais, France. A destruction crew on Wednesday, March 16 tore down the last of more than 1,000 tents and huts in a large swath of a makeshift migrant camp in the French port city of Calais, a job marked by fiery protests, an ongoing hunger strike and several arrests. The prefecture, or state authority, which ordered the dismantling of the southern sector of the camp - a veritable village on 7.5 hectares (18.5 acres) of land - said workers guarded by police finished pulling down the flimsy dwellings at 2 p.m. Wednesday, less than three weeks after the job began. (AP Photo/Michel Spingler, file)

By: Associated Press
Posted at 1:00 AM, Mar 30, 2016
PARIS (AP) — Police have evacuated a few hundred migrants from a makeshift camp near a subway station in northeastern Paris.
The Paris regional administration said the operation Wednesday was peaceful and authorities are relocating the migrants, who had been living beneath elevated train tracks for the past several weeks.
The Paris transit authority closed the Stalingrad metro station during the operation. The area has seen multiple migrant camps in recent years that are periodically cleared out.
French media reported the residents were primarily from Eritrea, Ethiopia, Sudan and Afghanistan.
France has not seen nearly as many Syrian refugees or other migrants over the past year as Germany or countries farther east, but has experienced tensions around the northern port of Calais, where migrants converge in hopes of crossing to Britain.
Associated Press 2016