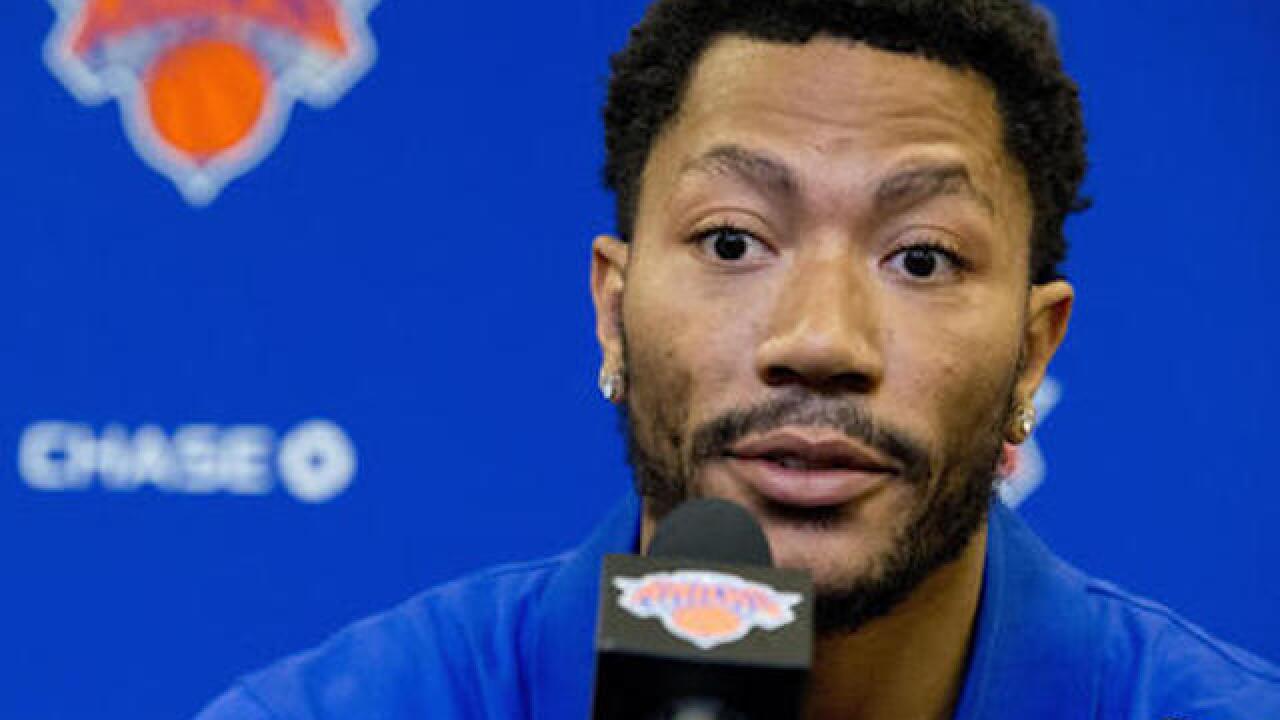 Mary Altaffer
<p>FILE - In this June 24, 2016, file photo, Derrick Rose speaks during a news conference at Madison Square Garden in New York. The NBA star Rose is due in a Los Angeles courtroom on Tuesday, Oct. 4, to fight a $21 million lawsuit by a former girlfriend who accuses him and two friends of gang raping her three years ago when she was incapacitated. The start of the trial in U.S. District Court conflicts with the Knicks preseason opener in Houston and it’s not clear which Rose will attend. (AP Photo/Mary Altaffer, File)</p>

LOS ANGELES (AP) — A woman accusing NBA star Derrick Rose and two friends of gang-rape testified Thursday in the trial of her $21.5 million lawsuit against the New York Knicks player, who appeared in court for the first time.

When Rose entered the courtroom, the woman paused and became emotional while being questioned by her attorney about the events on a night in August 2013.

The woman said she went to Rose's rented Beverly Hills mansion for drinks, got very drunk, felt like she had been drugged, and does not remember much about the mansion or the evening.

She said she drank before going to the mansion then had 3½ shots of tequila when she got there and felt different.

"I just felt I was less in control, more goofy," she said.

The witness said she had previously had tequila with Rose and felt like it gave her strength.

"This was the opposite," she said.

During a break in testimony, a lawyer for the two friends objected to the woman's amount of crying and asked the judge to order her to not cry.

The judge said he was unaware of courts that have ordered witnesses to not to cry.

The Associated Press is not naming the woman because it generally does identify people who say they are victims of sexual assault.

No criminal charges have been filed against Rose or the other men but Los Angeles police continue to investigate.

Rose, 28, didn't appear in court during jury selection earlier in the week or when attorneys made opening statements Wednesday to the panel of six women and two men.

"The plaintiff will tell you all three men were in the bedroom at the same time," said her attorney, Waukeen McCoy. "Each of them took turns raping her, they don't even know who went first."

In sharp contrast to McCoy's statement, defense lawyers doubled down on their assertions that the accuser willingly had sex with the trio at Rose's mansion in Beverly Hills.

They said the woman gave lap dances earlier under a sky full of stars by the side of Rose's pool overlooking city lights, performed oral sex on Rose and had sex with his two friends before inviting them back to her apartment.

McCoy said the story about her having sex earlier in the night was falsely concocted to try to show she was insatiable and wanted to have sex with the men later that night.

Jurors will have to rely primarily on her word against that of Rose and the other two men, Ryan Allen and Randall Hampton. There is no physical evidence because the woman was not examined by a doctor afterward and did not report the alleged rape to police for two years — after filing the suit.

McCoy said the woman was too embarrassed to initially report the incident.

After sex, Rose took his condom, put it back in the wrapper and took it with him "like he was never there," McCoy said.

NBA players are instructed to flush their condoms down the toilet or take them so women can't use the sperm to impregnate themselves, Rose's lawyer said.

Rose was traded to the New York Knicks this season after spending his previous seven years in his native Chicago with the Bulls. He's in the final year of a five-year deal that will pay him $21.3 million.

The defense will focus on the many text messages the woman exchanged with Rose, whom she dated on and off for nearly two years. The lawyers said the messages showed she was lucid and not intoxicated after returning home from Rose's mansion. They denied she was ever drugged.