Pentagon moving to increase US troops in Iraq 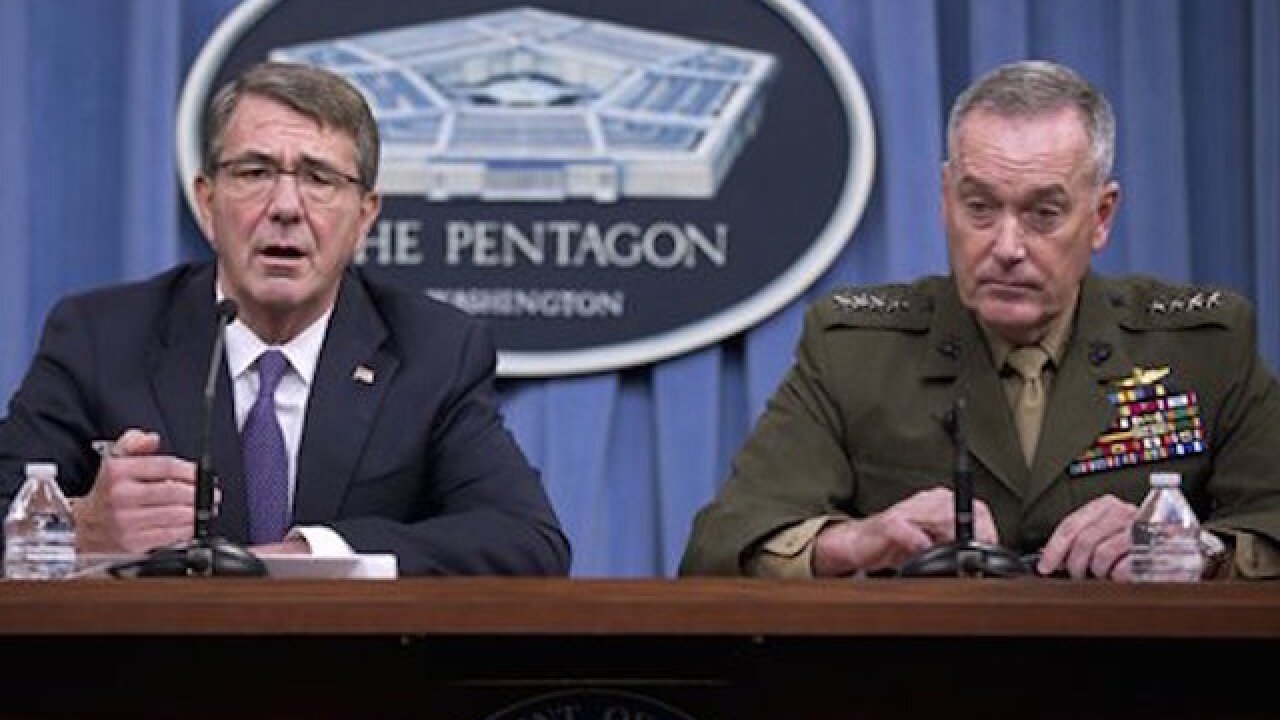 WASHINGTON (AP) — The Pentagon said Friday it was moving to increase the number of American forces in Iraq and announced that U.S. forces have killed the Islamic State's finance minister. "We are systematically eliminating ISIL's cabinet," Defense Secretary Ash Carter said.

Gen. Joseph Dunford, chairman of the Joint Chiefs of Staff, said recommendations on ways to increase U.S. support for Iraq's ground fight against IS are going to be discussed with President Barack Obama soon.

"The secretary and I both believe that there will be an increase in U.S. forces in Iraq in coming weeks, but that decision hasn't been made," Dunford told Pentagon reporters during a briefing. He did not say how big that increase might be.

Dunford's comments came as Carter announced that several key members of the Islamic State group were eliminated this week. According to a senior U.S. official, the group's financial minister was killed along with two associates in a U.S. raid in Syria. He is known by several names: Abdul-Rahman Mustafa Mohammed, Haji Iman, Haji Imam and Abu Iman, Haji Ayman and Abu Alaa al-Afari.

In a separate operation, a U.S. airstrike in Mosul killed another top Islamic State leader, the official said. Carter would not provide details of the strikes, and the U.S. official was not authorized to discuss the operations so spoke on condition of anonymity.

The successful attacks are part of a string of strikes targeting the group's leadership even as it losses territory in both Iraq and Syria. Dunford said there has been "indisputable" momentum against the Islamic State in recent weeks, as coalition airstrikes and Iraqi ground forces target the group's leaders, command and control structure and financing.

"By no means would I say that we are about to break the back of ISIL or that the fight is over," Dunford said, but added that there are a lot of reasons to be optimistic.

Carter said the senior IS leader killed was a "well-known terrorist" who had a hand in terrorist plots outside of Iraq and Syria. He said he was not aware of any link between him and this week's terrorist attacks in Brussels.

Carter said he has been associated with the Islamic State dating back to its earliest iteration as al-Qaida in Iraq. He said he had worked under Abu Musab al-Zarqawi as a liaison for operations in Pakistan.

"The removal of this ISIL leader will hamper the organization's ability to conduct operations both inside and outside Iraq and Syria," Carter said at a Pentagon news conference.

He added: "Indeed, the U.S. military killed several key ISIL terrorists this week, including we believe Haji Iman, who was an ISIL senior leader serving as a finance minister and who also was responsible for some external affairs and plots."

Asked about the impact of these killings, Carter said, "Leaders can be replaced. However, these leaders have been around for a long time. They are senior, they are experienced."