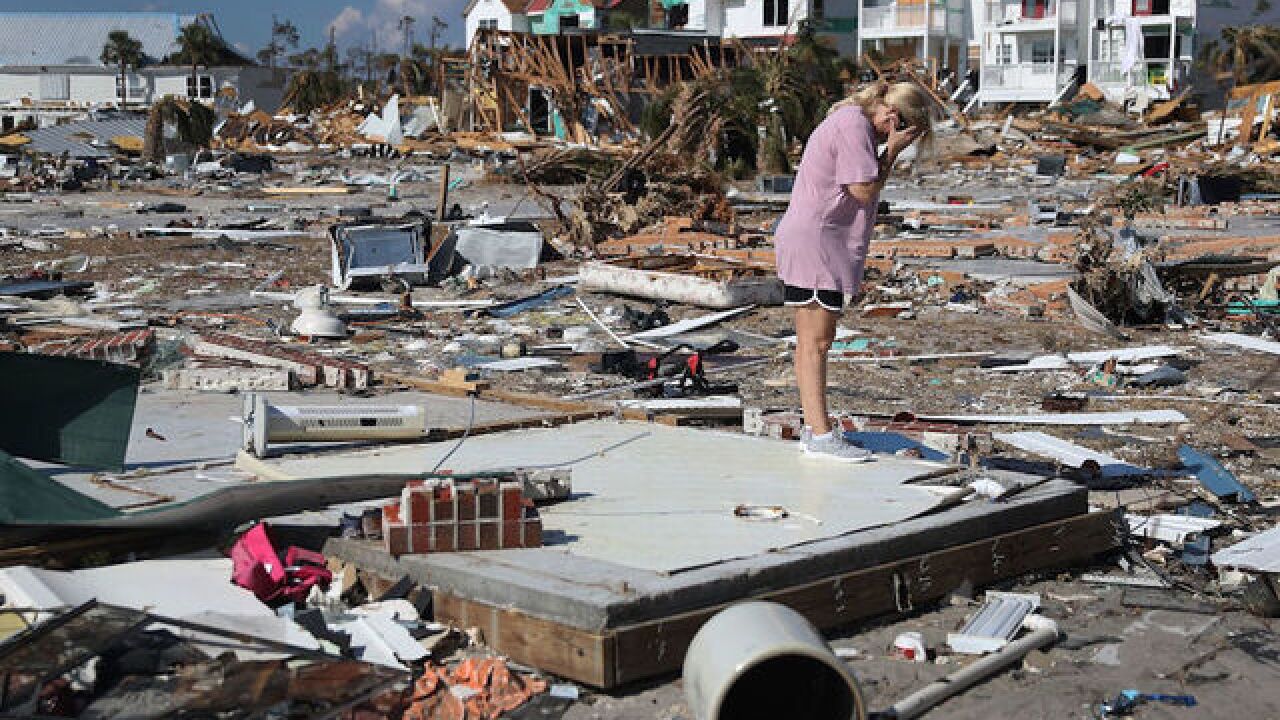 Image copyright 2018 Getty Images. All rights reserved. This material may not be published, broadcast, rewritten, or redistributed.
Joe Raedle
<p>Lisa Patrick is overcome with emotion as she visits the remains of her home to see if she can salvage anything after it was destroyed by Hurricane Michael as it passed through the area on October 15, 2018 in Mexico Beach, Florida. After seeing that only the concrete slab remained of the home, Lisa said, 'It's like your life is scattered all over the beach. Time to start over.' The hurricane hit the Florida Panhandle as a category 4 storm causing massive damage and claimed the lives of more then a dozen people.</p>

On Monday, authorities announced both that residents can begin returning home this week and that the estimate for the number of people unaccounted for has been lowered from at least 30 to three.

Mexico Beach took the hardest punch from Michael when the storm made landfall six days ago.

Besides the widespread destruction, town police say two people were killed there, including one body found Monday.

After standing by for days as authorities worked to secure the area and complete search and rescue, Mexico Beach residents learned Monday that they can return home on Wednesday.

About 280 of the town's 1,200 residents had said they planned to ride out the storm, but the town's mayor said many fled at the last minute when Michael quickly gained strength.

Authorities initially said they could not account for 30 to 35 people but police Monday lowered that number to three missing.

In a post on its official Facebook page, the city said Monday that residents would be allowed to return if they have proof of residence or photo identification. Property owners and insurance adjusters will also be allowed into the city. An evening curfew will remain in place until further notice.

City Manager Tanya Castor had earlier said residents would be allowed back in Tuesday.

Not everyone will be back.

Joe Bush, who says he has loved living in Mexico Beach for 19 years, has decided to move away.

Bush said he has ridden out previous storms but evacuated when he heard Michael was a Category 4. He came back to find his house, furniture and vehicles were heavily damaged by water.

"I couldn't get nothing for this land now," he said. "People gonna be scared to death to come down here to buy and invest money. So we're just going to leave it. Hold onto the land and I have a 10-year-old grandson and hopefully when he gets 50 he can retire down here."

But as Randy June stared at his flattened neighborhood on Monday -- dazed as his belongings lay strewn across a canal -- he resolved to return. Although his house is destroyed, June said Mexico Beach is still home.

"We ain't going nowhere. We're going to rebuild somehow. I just don't know how yet," he said.

So far, 19 people have been confirmed dead in four states as a result of the storm.

There have been at least seven fatalities in other parts of Florida, including Steven Sweet, who died when an oak tree fell on his Gretna home.

Six of Michael's victims died in Virginia. Four people drowned and a firefighter was killed when a tractor-trailer lost control and hit the firefighter's truck on a wet highway. Virginia emergency officials said the sixth person died in Charlotte County.

In Georgia, an 11-year-old girl died when a metal carport came crashing through her family's roof.

In North Carolina, two of the three people who who died in the storm were killed when their vehicle struck a fallen tree, McDowell County officials said.

Hundreds of people from across the country have called local officials in areas hit by Michael, desperate for any news about their loved ones. But rescue attempts have been arduous because of widespread debris and buckled roads that make transportation difficult.

Crews are using bulldozers to move debris and cutting trees with chainsaws to clear highways and hundreds of roads blocked by the wreckage.

Over the weekend Panama City Fire Chief Alex Baird said it could take days or even weeks before checks on residents would be completed. Crews need to go door-to-door because there is no power, and cellphone service is spotty.

More than 140,000 of Florida's residents were still without power Monday night. Drivers have been lining up for hours to get fuel. And residents in the hardest-hit areas are relying on airdropped food and water to survive.

On Monday, President Donald Trump visited some of the devastated cities in Florida and Georgia.

Over the weekend, he made a disaster declaration for six Georgia counties. That followed his previous declaration of a major disaster in nine Florida counties.

These declarations give affected residents and businesses access to federal aid and funding.

FEMA has 12 teams in Florida to help people register for disaster assistance. It also has 42 distribution points throughout Florida and Georgia where people can get food and water.

In a statement Monday, the agency said more than 16,000 federal employees, including over 8,000 military personnel were helping with response efforts.

'Nobody was in tears about being hungry'

Chad Frazier has plenty of reasons to be devastated. His business was wiped out by the hurricane. His son's middle school in Panama City was also annihilated.

But Frazier is too thankful to be upset. Immediately after the hurricane, strangers came from out of town to provide food and water. They even beat FEMA to the scene, Frazier said.

"The people who came, that was the biggest blessing to us," he said. "I didn't see nobody in panic mode. Nobody was in tears about being hungry."

As he stood in front of a mountain of debris, Frazier said he's coping well thanks to the outpouring of generosity.