Obama wants Trump to 'stand up to Russia' 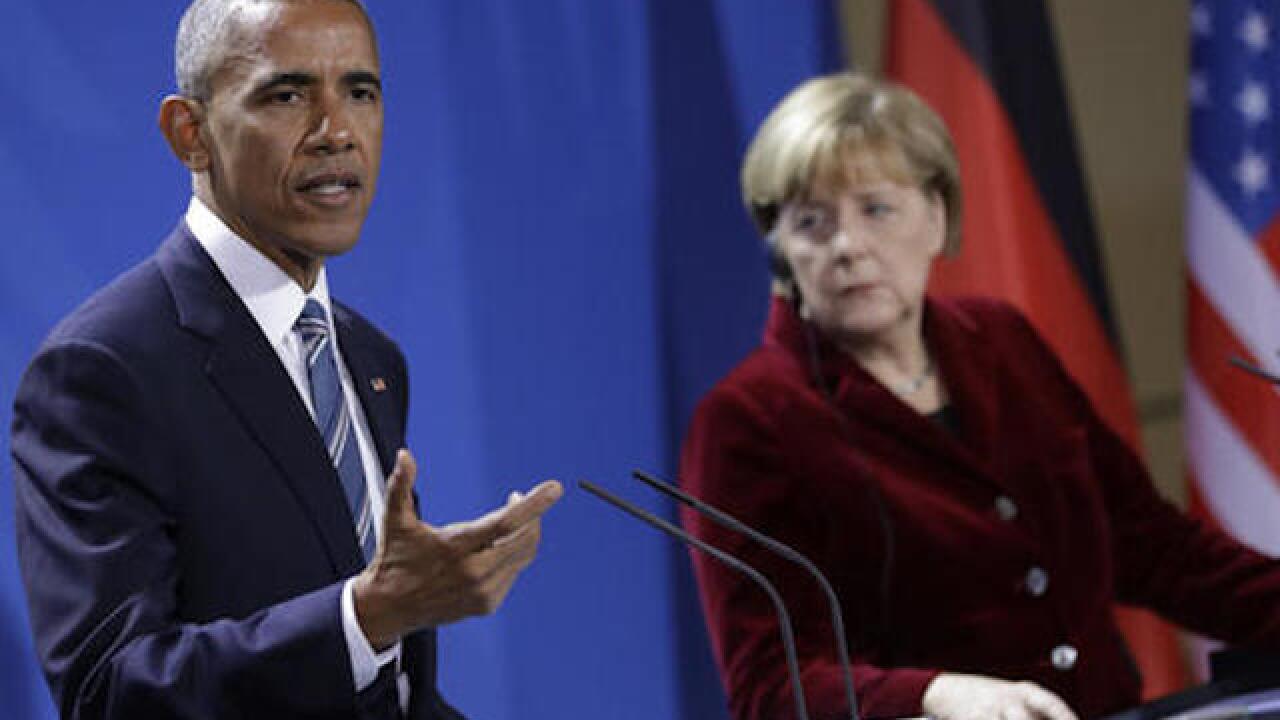 President Barack Obama says he hopes President-elect Donald Trump will "stand up to Russia" when it deviates from U.S. values and international norms.

Obama says on issues such as the Ukraine and Syria, the U.S. has very significant differences with Russia. He says it's important to find areas of cooperation with Russia when values align, but he also hopes the new president will be firm with Russia when they don't.

Obama says he's doesn't expect Trump to follow the Obama' administration blueprint or approach, but also hopes he won't simply walk away from the administration's efforts.

The president also says Trump's commitment to NATO is important.

German Chancellor Angela Merkel says her country is prepared to increase its military commitments as demanded by allies such as the United States.

Germany has long been criticized by the alliance for not meeting its obligation to commit at least 2 percent of its GDP to defense spending. And President-elect Donald Trump pressed NATO allies during his election campaign to pay their share, and suggested the U.S. might back away from the alliance if they don't.

Merkel says: "We got the message and have started to react."

She was speaking at a press conference with President Barack Obama in Berlin on Thursday.

Germany spent about 1.2 percent of its gross domestic product on defense last year.

President Barack Obama says it's important that global trade agreements continue when concerns are running high about globalization and its effects on some people.

Obama is holding a news conference in Berlin with German Chancellor Angela Merkel.

Obama is alluding to skepticism in the U.S. about free trade agreements that was on display in the recent election of Donald Trump. Obama says the last several decades have shown that markets, trade and commerce can create prosperity in all countries.

The president also says the European Union remains one of the world's great achievements. He says those achievements should be nurtured and cultivated, not taken for granted.

German Chancellor Angela Merkel says the world can't revert to a time before globalization. She says her country will continue to pursue free trade deals with the United States.

Negotiations over a trans-Atlantic trade pact failed to conclude before the end of President Barack Obama's second term, effectively putting the project on ice for years to come.

Merkel told a news conference with Obama in Berlin on Thursday that she is "quite sure we will return to it one day."

She says she hopes to "work closely with the new president" when Donald Trump takes office next year. Trump's skepticism about free trade agreements underpinned his campaign.

The United States urged Russia a week before Election Day to stop interfering in the election through cyberattacks.

That's according to a senior Obama administration official who requested anonymity to discuss private diplomatic conversations.

The official says the U.S. contacted Moscow about malicious cyber activity that was originating in Russia and targeting U.S. elections systems. The complaint was registered through a secure "hotline" between the Nuclear Risk Reduction Centers in both the U.S. and Russia.

The U.S. has previously accused Russia publicly of coordinating hacks of the Democratic National Committee and other U.S. institutions in the run-up to last week's presidential election.

President Barack Obama is sitting down with German Chancellor Angela Merkel for formal meetings in Berlin as part of Obama's sixth and final visit to the nation.

The two leaders sat down on opposite sides of a long table along with top foreign policy aides. Obama was accompanied by his national security adviser, Susan Rice.

Obama and Merkel made no comments to reporters as they started the meeting. They'll take questions together at a news conference later Thursday afternoon.

German news magazine Der Spiegel says U.S. President Barack Obama has praised German Chancellor Angela Merkel as someone "who is willing to fight for her values."

Obama told Spiegel and German public Television ARD in a joint interview Thursday that he's glad Merkel is around and that "the Germans should appreciate her."

Obama also warned not to underestimate the consequences of globalization.

The president told the two media organizations that, "If the global economy does not respond to the people who feel left behind; if inequality continues to grow, we will witness that the divisions in the industrial countries will broaden."

Der Spiegel and ARD released excerpts of the talk with Obama ahead of the screening of the entire interview on Thursday night.

White House press secretary Josh Earnest says the Obama administration has "put a lot of diplomatic capital on the table" to resolve the protracted civil war in Syria and acknowledges it "hasn't worked," but says military force is no solution.

Interviewed on MSNBC's "Morning Joe" show Thursday from Berlin where he's accompanying Obama on a visit to Germany, Earnest was asked about the continuing loss of life, including children, in the Syrian city of Aleppo.

"What is true is that the tactics that have been used by the Assad regime and the Russians are frankly disgraceful," Earnest said, accusing them of seeking to target "innocent civilians" and saying it was an "outrage."

"The question really is" what the United States and the international community can do to end the violence, Earnest said, adding that Secretary of State John Kerry "has been working doggedly" to bring relief for the suffering.

President Barack Obama is opening his first full day in Berlin by having lunch with U.S. Ambassador John Emerson.

The White House says they're having a private lunch at the U.S. Embassy in Berlin. Obama also spent part of his morning taping a joint interview with the Der Spiegel newspaper and German public TV station ARD.

Obama plans to meet later Thursday with German Chancellor Angela Merkel and hold a joint news conference with her.

President Barack Obama is stressing a message of solidarity on his final visit to Germany — a top trade partner, key NATO ally and home to thousands of American troops, as well as a nation critical to solving Europe's migrant crisis and debt woes.

Obama arrived Wednesday night in Berlin from Greece, making his sixth and final visit as president to Germany, where he has been popular since even before he was elected. His eight years in office have helped erase much of the anti-American sentiment that had grown during the administration of George W. Bush over the Iraq war and other policies.

German Chancellor Angela Merkel, who worked well with Bush before Obama's election, dined with Obama Wednesday night at his hotel and was to hold talks with him Thursday afternoon.