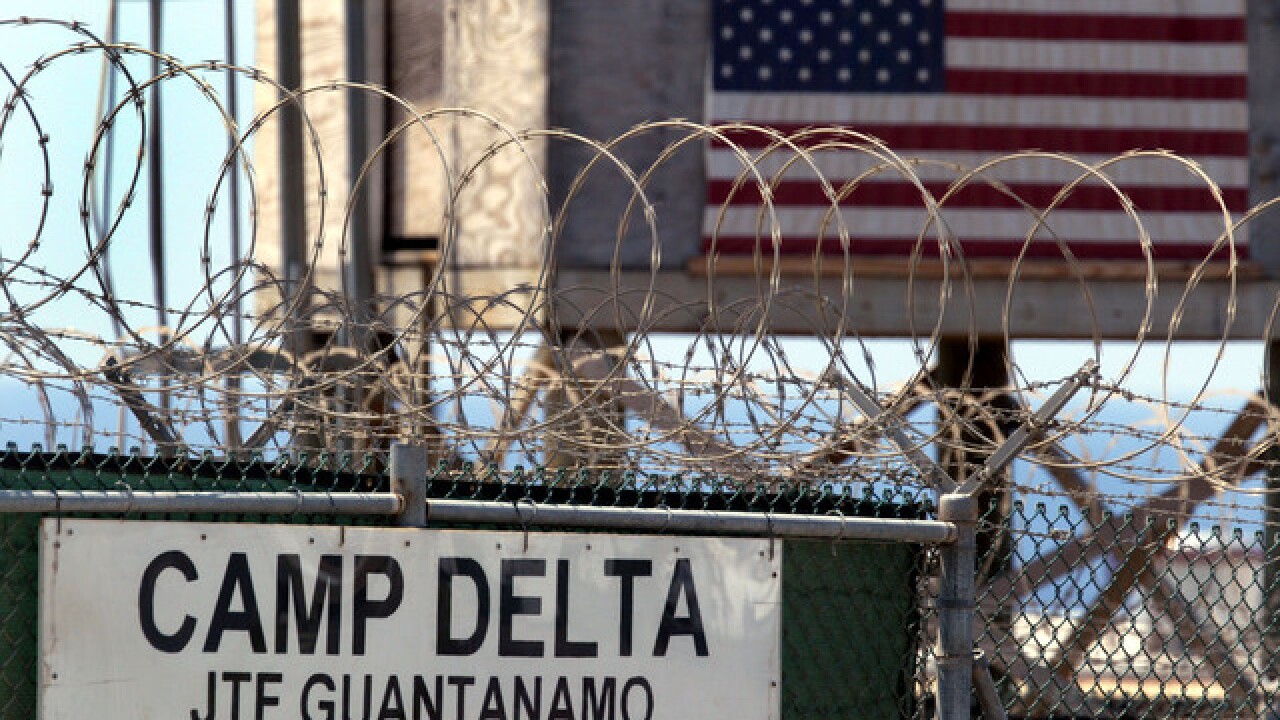 Copyright 2018 Scripps Media, Inc. All rights reserved. This material may not be published, broadcast, rewritten, or redistributed.
Joe Raedle
GUANTANAMO BAY, CUBA - APRIL 7: The entrance to Camp Delta where detainees from the U.S. war in Afghanistan live is shown April 7, 2004 in Guantanamo Bay, Cuba. On April 20, the U.S. Supreme Court is expected to consider whether the detainees can ask U.S. courts to review their cases. Approximately 600 prisoners from the U.S. war in Afghanistan remain in detention. (Photo by Joe Raedle/Getty Images)

"I would expect, at this point, additional transfers to be announced," said Josh Earnest, the White House press secretary. He characterized the moves, which come in the final weeks of Obama's administration, as continuing the long-running effort to clear detainees from the prison.

Earlier Tuesday, Trump revived the hot-button topic of the prison facility at Guantanamo Bay, also known as Gitmo, in a Twitter message warning against further prisoner transfers before he takes office.

"There should be no further releases from Gitmo. These are extremely dangerous people and should not be allowed back onto the battlefield," Trump tweeted Tuesday.

Earnest said Obama would not factor Trump's tweet into his decision-making on the prison.

Trump, he said, would have "an opportunity to implement the policy that he believes will be more effective when he takes office on January 20."

Trump's message, consistent with his campaign promise to keep the facility open and even increase the number of detainees, came shortly after the President-elect criticized House Republicans for prioritizing a vote to gut Congress' independent ethics panel over other important issues, causing the House GOP to back down on the change.

"With all that Congress has to work on, do they really have to make the weakening of the Independent Ethics Watchdog, as unfair as it ... may be, their number one act and priority," Trump tweeted. "Focus on tax reform, healthcare and so many other things of far greater importance! #DTS."

Trump particularly criticized the timing of the vote, which was scheduled for the first day of the new congressional session.

Trump's tweet on Guantanamo also followed news last month that Obama was trying to leave as few prisoners there as possible, notifying Congress that the administration intends to transfer out some of the detainees before Trump is sworn in.

In February, Trump told supporters after watching Obama talk about the prison that he would keep it open and that "we're going to load it up."

While some detainees have returned to the battlefield, they are released to host countries who agree to take them. The idea is that the host country keeps an eye on those released detainees so they don't return to terrorism, but there's no guarantee of success.

Peter Cook, the Pentagon's press secretary, said in response to Trump's tweet that the department would follow the "appropriate policies" set forth by Obama.

"We're going to carry out the appropriate policies as set forth by the commander in chief with regard to Guantanamo Bay and the secretary of defense," Cook said at a press briefing.