Obama: I told Putin 'cut it out' on hacking 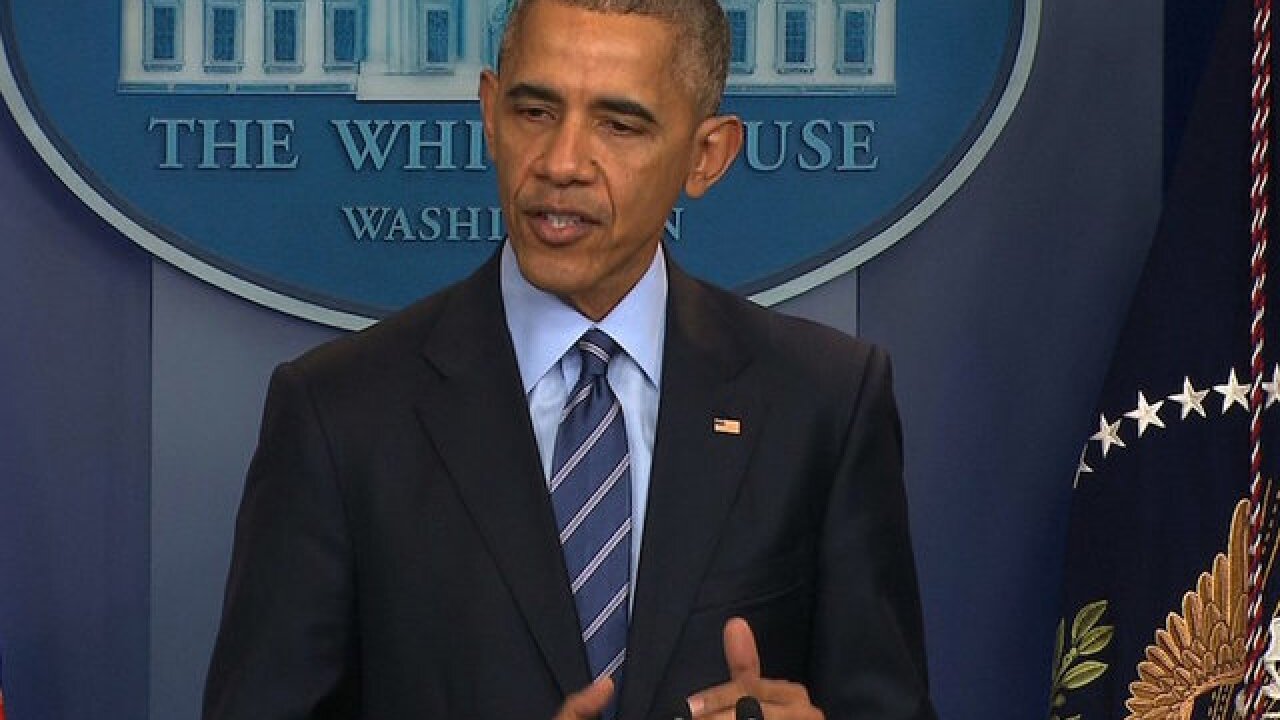 WASHINGTON (CNN) -- President Barack Obama asserted Friday that a September confrontation with his Russian counterpart prompted Moscow to cease its cyber breach of the US election.

During a meeting on the sidelines of the Group of 20 summit in China, Obama said he insisted President Vladimir Putin "cut it out" and told him "there were going to be serious consequences if he didn't.

"In fact we did not see further tampering of the election process," Obama said at a year-end news conference. "But the leaks through Wikileaks had already occurred."

Obama also contended Friday that there was no "squabbling" between his White House and the incoming Trump administration, insisting that a roiling debate over Russia's intrusion into the US election should be confronted on a bipartisan basis.

"What we have simply said are the facts," Obama said during a year-end news conference. "Based on uniform intelligence assessments, the Russians were responsible for hacking the DNC, and as a consequence, it is important for us to review all elements of that and make sure we are preventing that kind of interference through cyberattacks in the future."

"That shouldn't be a partisan issue," Obama went on. "My hope is the President-elect is similarly going to be concerned that we don't have foreign influence in our election process."

Despite his assurances, his White House has increasingly been engaged in an escalating rift with Donald Trump's transition team over Moscow's intrusion into the US vote. At the same time, Obama is working to foster a productive relationship with his successor in a bid to influence his presidential decision-making.

Some Democrats have argued the White House was slow in naming Russia as the hacking culprit, though Obama and his aides argue that pushing the intelligence community to make that assessment earlier would have appeared like political interference.

In an interview with NPR that aired Friday, Obama attempted a balance, saying it was clear Trump and his team knew what Russia's intentions were, but arguing the issue shouldn't become mired in partisan politics.

At the same time, he vowed a retaliatory response to Moscow's cyber intrusions and said Trump would be wise to uphold a US commitment to international norms.

"I had a conversation with the President-elect about our foreign policy generally, and the importance of us making sure that in how we approach intelligence gathering and how we think about fighting terrorism and keeping the country secure ... that we recognize America's exceptionalism, our indispensability in the world in part draws from our values and our ideals," Obama said.

It's become the President's annual tradition to take reporters' questions a few hours before departing on his holiday vacation in Hawaii.

It comes as Obama also finds himself reckoning with a worsening humanitarian emergency in Syria, where Russian and Iranian-backed government forces recently retook the city of Aleppo. Obama has called Syria a deeply frustrating crisis that haunts him daily.

He condemned the situation Friday, harshly accusing the Syrian regime, along with Moscow and Tehran, of slaughtering civilians in Aleppo.

"We have seen a deliberate strategy of surrounding, besieging and starving innocent civilians," Obama said.

"Responsibility for this brutality lies in one place alone: the Assad regime and its allies Russia and Iran," Obama declared. "The blood for these atrocities are on their hands."

The President led off the traditional Q-and-A session by touting his achievements from his time in office, starting off by noting that Thursday saw the biggest number of Obamacare sign-ups -- 670,000 people -- in a single day.

A spokesman for the Department of Health and Human Services said that it was due to this "extraordinary demand" that the deadline to sign up for coverage beginning on January 1, 2017, has been extended until December 19.

The news comes just weeks ahead of lawmakers reconvening for the new session of Congress on January 3. Republicans intend to move swiftly to repeal major parts of the Affordable Care Act through a budget reconciliation bill.