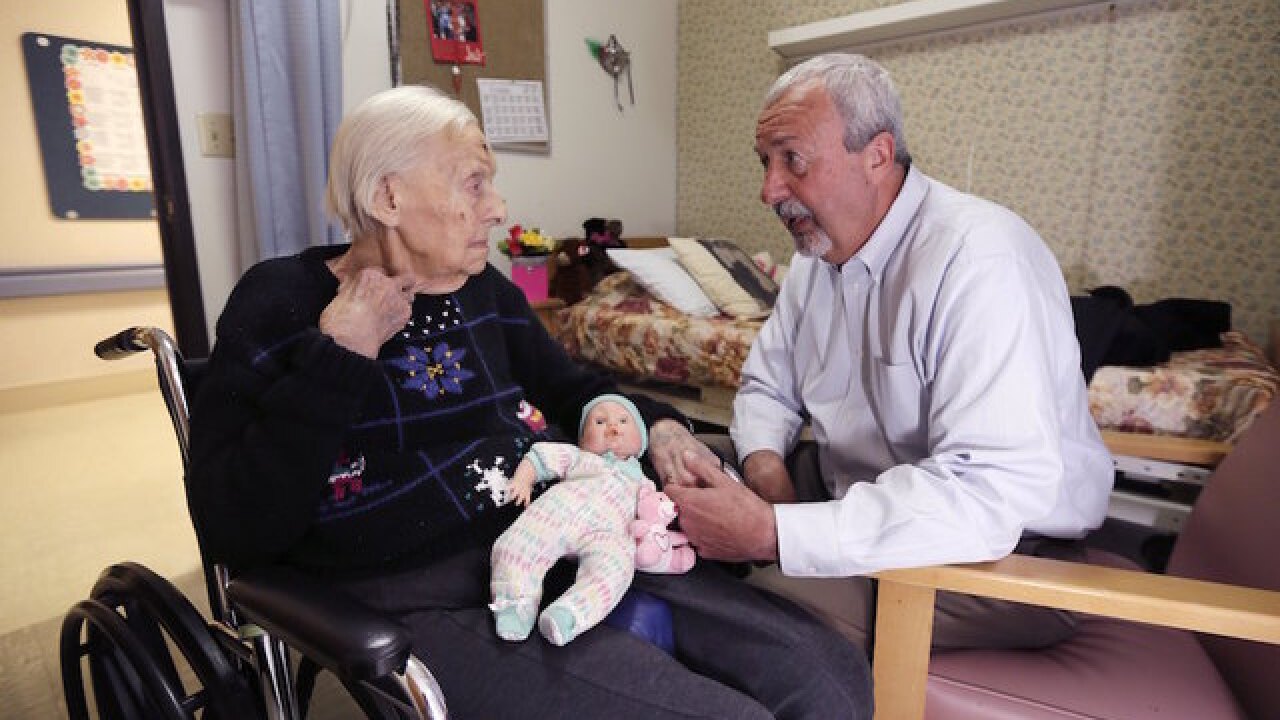 Carlos Osorio
<p>In a photo from April 14, 2016, Glen Hotchkiss talks to his mother Phyllis Hotchkiss at her nursing home in Adrian, Mich. Phyllis, 93, has dementia and is confined to a wheelchair and was involuntarily discharged from her nursing home this year to one further away from her family.</p>

NEW YORK (AP) — Nursing homes are increasingly evicting their most challenging residents, testing protections for some of society's most vulnerable, advocates for the aged and disabled say.

Those targeted for eviction are frequently poor and suffering from dementia, with families unsure of what to do, according to residents' allies. Removing them allows an often stretched-thin staff to avoid the demands of labor-intensive patients in favor of ones who are easier and more profitable.

"When they get tired of caring for the resident, they kick the resident out," said Richard Mollot of the Long Term Care Community Coalition, a New York advocacy group.

Complaints and lawsuits across the U.S. point to a spike in evictions even as observers note available records only give a glimpse of the problem.

An Associated Press analysis of federal data from the Long-Term Care Ombudsman Program finds complaints about discharges and evictions are up about 57 percent since 2000. It was the top-reported grievance in 2014, with 11,331 such issues logged by ombudsmen, who work to resolve problems faced by residents of nursing homes, assisted living facilities and other adult-care settings.

The American Health Care Association, which represents nursing homes, defends the discharge process as lawful and necessary to remove residents who can't be kept safe or who endanger the safety of others, and says processes are in place to ensure evictions aren't done improperly. Dr. David Gifford, a senior vice president with the group, said a national policy discussion is necessary because there are a growing number of individuals with complex, difficult-to-manage cases who outpace the current model of what a nursing home offers.

"There are times these individuals can't be managed or they require so much staff attention to manage them that the other residents are endangered," he said.

The numbers of both nursing homes and residents in the U.S. have decreased in recent years; about 1.4 million people occupy about 15,600 homes now. The overall number of complaints across a spectrum of issues has fallen in the past decade, though complaints about evictions are down only slightly from their high-water mark in 2007, the federal figures show. Meanwhile, the share of complaints that evictions and discharges represent has steadily grown, holding the top spot since 2010.

Advocates say offending facilities routinely flout federal law, attempting to exploit and widen justifications for discharge. They say hospitalizations are a common time when facilities seek to purge residents, even though the Nursing Home Reform Act of 1987 guarantees Medicaid recipients' beds must be held in their nursing homes during hospital stays of up to a week.

"They try and take the easy way out and refuse to let the person back in," said Eric Carlson, an attorney who has contested evictions for the advocacy group Justice in Aging.

Bruce Anderson, 66, suffered a brain injury more than a decade ago, and had been through several transfers before ending up at Norwood Pines Alzheimer's Care Center in Sacramento, California. His daughter, Sara Anderson, said the facility began insisting it wasn't an appropriate setting for him, and after he was hospitalized with pneumonia, he wasn't allowed back.

She saw the action as retaliatory after repeated complaints about her father's care. She appealed the facility's action and won, but said it still refused to let him back. He remains hospitalized.

"It doesn't matter if you win or lose it, there's not enforcement of these hearings. We didn't know that the hearing was pointless," she said.

Federal law allows unrequested transfers of residents for a handful of reasons: the facility's closure; failure to pay; risk posed to the health and safety of others; improvement in the resident's condition to the point of no longer needing the home's services; or because the facility can no longer meet the person's needs.

Though that final category is often cited in evictions, advocates dispute how often it fits.

"The majority of the time, it's because the resident is considered difficult," said Tony Chicotel, an attorney for California Advocates for Nursing Home Reform.

Chicotel says involuntary discharges are almost entirely focused on Medicaid beneficiaries and that economics sometimes play a role in the ousters. Rather than a long-term Medicaid patient, many facilities would prefer to fill a bed with a private-pay resident or a short-term rehabilitation patient, whose care typically brings a far higher reimbursement rate under Medicare.

Vicki Becker of Sammamish, Washington, said she began receiving pressure from administrators at her mother's assisted living facility about two years ago to have the then-94-year-old transferred elsewhere. For the first six years she had lived in the home, she had paid more than $5,000 monthly. It was only after Becker's mother exhausted her savings and went on Medicaid that the facility initiated discharge proceedings, making her wonder if money was a factor.

Becker hired a lawyer and enlisted the help of the local ombudsman to fight the eviction. Though the facility eventually dropped the discharge case, it left her feeling as if her mother's rights had been violated.

"It was her home," she said. "What an awful thing to do to somebody."

Whatever facilities' reasons, the process can be harrowing.

Agyemang Bediako knows the feeling well. After breaking both legs in a jump from a burning building, he found himself recovering at a New York City nursing home. He said he was still undergoing rehabilitation when the facility told him it would be discharging him to a homeless shelter.

"I was panicked," he said, describing his thoughts before a successful appeal of his case. "What am I going to do? I couldn't even eat. I became depressed. I wanted to kill myself."