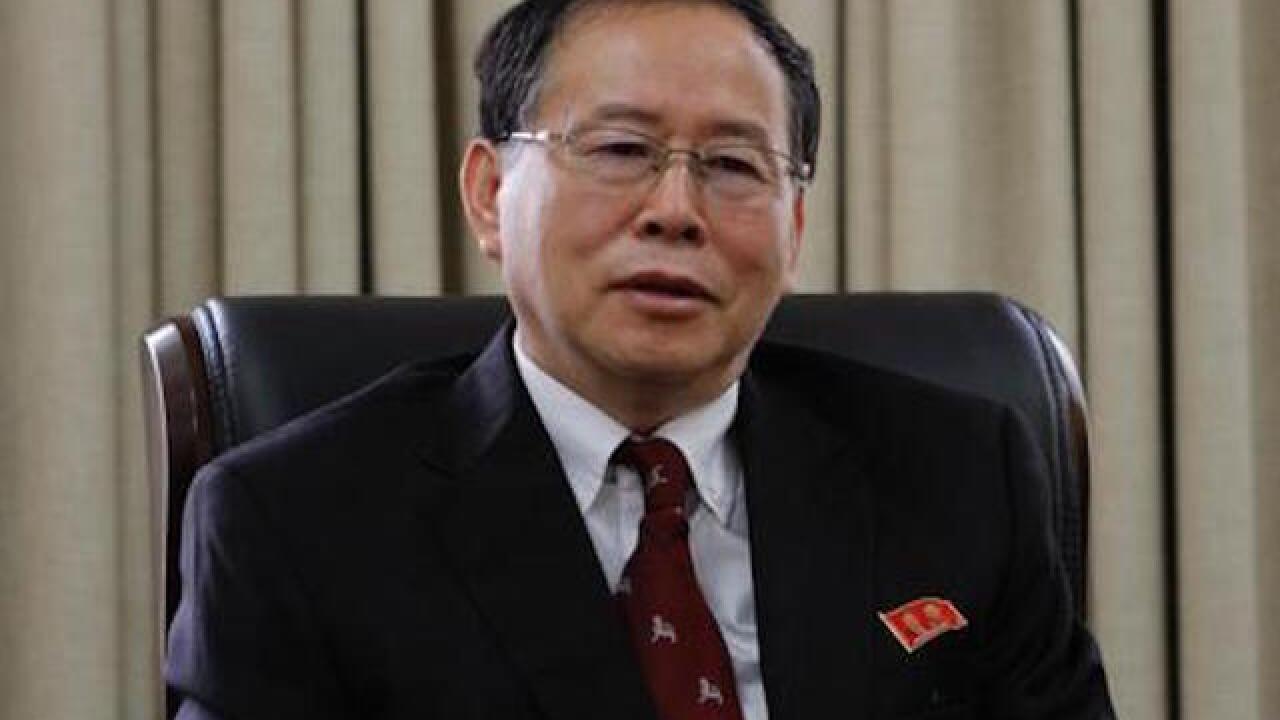 PYONGYANG, North Korea (AP) — North Korea's top diplomat for U.S. affairs told The Associated Press on Thursday that Washington "crossed the red line" and effectively declared war by putting leader Kim Jong Un on its list of sanctioned individuals, and said a vicious showdown could erupt if the U.S. and South Korea hold annual war games as planned next month.

Han Song Ryol, director-general of the U.S. affairs department at the North's Foreign Ministry, said in an interview that recent U.S. actions have put the situation on the Korean Peninsula on a war footing.

The United States and South Korea regularly conduct joint military exercises south of the Demilitarized Zone, and Pyongyang typically responds to them with tough talk and threats of retaliation.

Han said North Korea believes the nature of the maneuvers has become openly aggressive because they reportedly now include training designed to prepare troops for the invasion of the North's capital and "decapitation strikes" aimed at killing its top leadership.

Han says designating Kim himself for sanctions was the final straw.

"The Obama administration went so far to have the impudence to challenge the supreme dignity of the DPRK in order to get rid of its unfavorable position during the political and military showdown with the DPRK," Han said, using the acronym for North Korea's official name, the Democratic People's Republic of Korea.

"The United States has crossed the red line in our showdown," he said. "We regard this thrice-cursed crime as a declaration of war."

Although North Korea had already been heavily sanctioned internationally for its nuclear weapons and long-range missile development programs, Washington's announcement on July 6 was the first time Kim Jong Un has been personally sanctioned.

Less than a week later, Pyongyang cut off its final official means of communications with Washington — known as the New York channel. Han said Pyongyang has made it clear that everything between the two must now be dealt with under "war law."

Kim and 10 others were put on the list of sanctioned individuals in connection with alleged human rights abuses, documented by the United Nations Human Rights Commission, that include a network of political prisons and harsh treatment of any kind of political dissent in the authoritarian state. U.S. State Department officials said the sanctions were intended in part to highlight those responsible for the abuses and to pressure lower-ranking officials to think twice before carrying them out.

Pyongyang denies abuse claims and says the U.N. report was based on fabrications gleaned from disgruntled defectors. Pointing to such things as police shootings of black Americans and poverty in even the richest democracies, it says the West has no moral high ground from which to criticize the North's domestic political situation. It also says U.S. allies with questionable human-rights records receive less criticism.

Han took strong issue with the claim that it not the U.S. but Pyongyang's continued development of nuclear weapons and missiles that is provoking tensions.

"Day by day, the U.S. military blackmail against the DPRK and the isolation and pressure is becoming more open," Han said. "It is not us, it is the United States that first developed nuclear weapons, who first deployed them and who first used them against humankind. And on the issue of missiles and rockets, which are to deliver nuclear warheads and conventional weapons warheads, it is none other than the United States who first developed it and who first used it."

He noted that U.S.-South Korea military exercises conducted this spring were unprecedented in scale, and that the U.S. has deployed the USS Mississippi and USS Ohio nuclear-powered submarines to South Korean ports, deployed the B-52 strategic bomber around South Korea and is planning to set up the world's most advanced missile defense system, known by its acronym THAAD, in the South, a move that has also angered China.

Echoing earlier state-media reports, Han ridiculed Mark Lippert, the U.S. ambassador to South Korea, for a flight on a U.S. Air Force F-16 based in South Korea that he said was an action "unfit for a diplomat."

"We regard that as the act of a villain, who is a crazy person," Han said of the July 12 flight. "All these facts show that the United States is intentionally aggravating the tensions in the Korean Peninsula."

Han warned that Pyongyang is viewing next month's planned U.S.-South Korea exercises in this new context and will respond if they are carried out as planned.

"Nobody can predict what kind of influence this kind of vicious confrontation between the DPRK and the United States will have upon the situation on the Korean Peninsula," he said. "By doing these kinds of vicious and hostile acts toward the DPRK, the U.S. has already declared war against the DPRK. So it is our self-defensive right and justifiable action to respond in a very hard way.

Last year's Ulchi Freedom Guardian exercises involved 30,000 American and 50,000 South Korean troops and followed a period of heightened animosity between the rival Koreas sparked by land mine explosions that maimed two South Korean soldiers. In the end, the exercises escalated tensions and rhetoric, but concluded with no major incidents.

Han dismissed calls for Pyongyang to defuse tensions by agreeing to abandon its nuclear program.