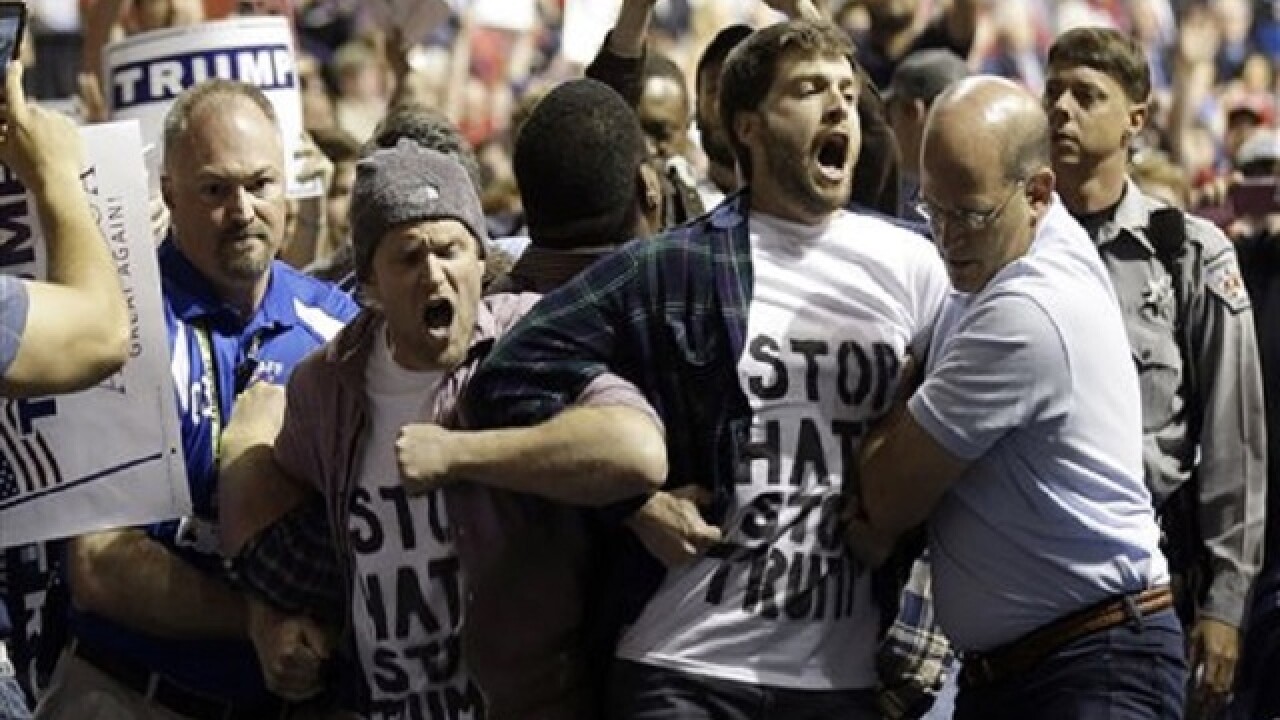 Gerry Broome
<p>FILE - In this Wednesday, March 9, 2016 file photo, protesters are removed as Republican presidential candidate Donald Trump speaks during a campaign rally in Fayetteville, N.C. Authorities in North Carolina say they are looking at Trump�s behavior as they continue their probe of a violent altercation at one of his rallies last week. The Cumberland County Sheriff�s Office said in a March 14 statement that it�s investigators are continuing to look at the rally in Fayetteville, during which a man was hit in the face while being escorted out. (AP Photo/Gerry Broome)</p>

FAYETTEVILLE, N.C. (AP) — Authorities in North Carolina say there isn't enough evidence to press charges against Donald Trump for his behavior in connection with a violent altercation at one of his rallies last week.
In a statement issued Monday night, the Cumberland County Sheriff's Office said legal counsel advised and Sheriff Earl "Moose" Butler agreed that the evidence doesn't meet the requisites of North Carolina law to support a conviction for inciting a riot.
The sheriff's office said while other aspects of its investigation are continuing, the investigation related to Trump and his campaign is over and no charges are anticipated.
An initial statement on Monday said investigators were continuing to look at the rally last Wednesday in Fayetteville, during which a man was hit in the face while being escorted out.
"We are continuing to look at the totality of these circumstances ... including the potential of whether there was conduct on the part of Mr. Trump or the Trump campaign which rose to the level of inciting a riot," the statement said.
Authorities have already charged a rally attendee with assault, disorderly conduct and communicating threats after he was caught on video hitting a man being led out by deputies at the event in Fayetteville.
At one point during the rally, Trump described a previous event in which a protester traded punches with his supporters. Trump told the audience: "They started punching back. It was a beautiful thing."
In a statement, Trump's campaign said, "the arena was rented for a private event, paid for by the campaign and these people attended with the intent to cause trouble. They were only there to agitate and anger the crowd. It is the protesters and agitators who are in violation, not Mr. Trump or the campaign."
Associated Press 2016