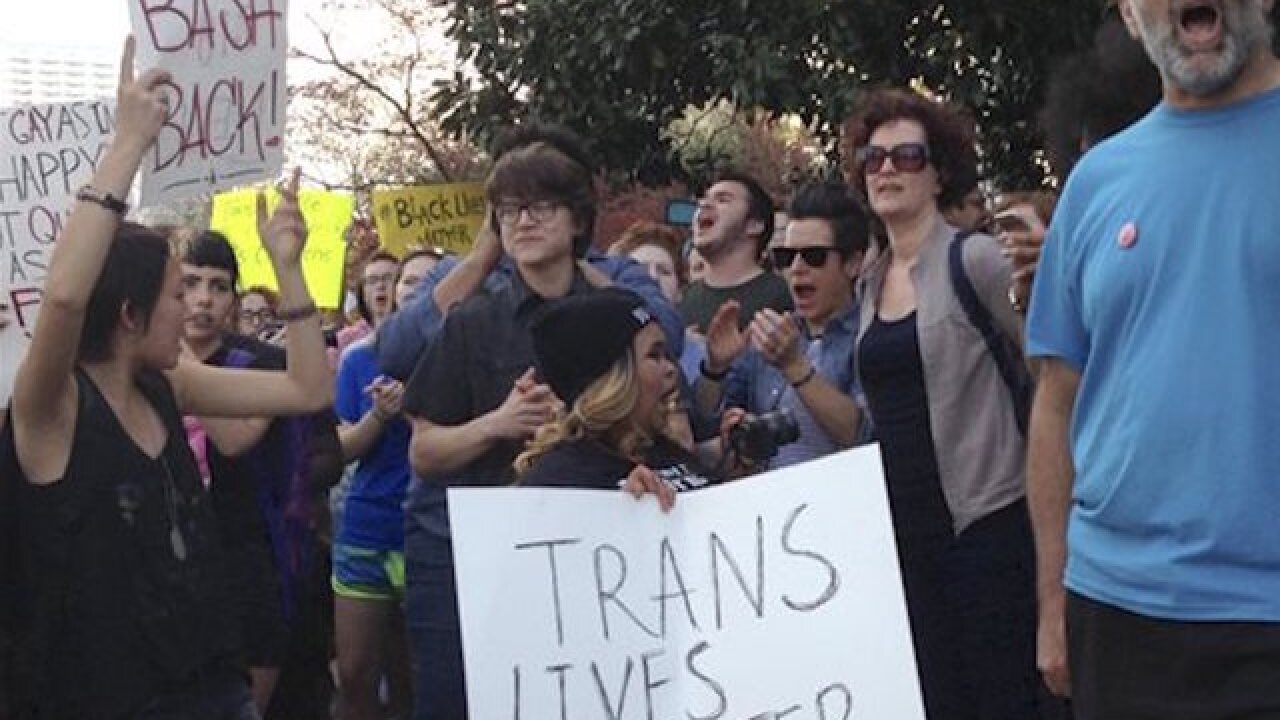 By: The Associated Press
Posted at 8:45 AM, Mar 29, 2016
RALEIGH, N.C. (AP) — The North Carolina governor's race has suddenly become a referendum on discrimination.
Republican Gov. Pat McCrory, seeking re-election in what's anticipated to be one of the nation's most heated and expensive campaigns, is doubling down on a sweeping law he signed last week preventing local governments from protecting people on the basis of sexual orientation and gender identity when they use public accommodations such as hotels and restaurants. People also would have to use multi-stall bathrooms that match their birth certificates at state agencies and public schools and universities.
Attorney General Roy Cooper, the governor's Democratic challenger, announced Tuesday that his office won't defend this "national embarrassment" against a federal lawsuit filed by two transgender men, a lesbian law professor and civil rights groups.
"We are here because the governor has signed statewide legislation that puts discrimination into the law," Cooper announced. Citing criticism from a growing list of major corporations and sports organizations, he said: "It will set North Carolina's economy back if we don't repeal it."
McCrory complained this week that a well-coordinated national campaign is "distorting the truth," and in a video Tuesday accused Cooper of "inventing conflict that simply doesn't exist" to justify his argument to refuse to defend the law.
The CEOs of dozens of big technology, biotech and financial companies signed a letter released Tuesday by gay rights advocates urging state officials to overturn the law, which the governor signed just hours after it was introduced and approved by Republicans in a special session.
"Discrimination is wrong and we believe it has no place in North Carolina or anywhere in our country. As companies that pride ourselves on being inclusive and welcoming to all, we strongly urge you and the leadership of North Carolina's legislature to repeal this law in the upcoming legislative session," reads the letter, signed by IBM CEO Virginia Rometty, Apple head Tim Cook and Mark Zuckerberg of Facebook, among others.
The North Carolina Values Coalition, for its part, said hundreds of business owners support the state law, but many don't want to be named for fear of retaliation, a spokeswoman said.
Both campaigns are already using the law in fundraising pleas, and their supporters are reminding the public of each candidate's stand. With litigation expected to last months during this presidential election year, the fight is sure to rage on through November, touching on cultural and economic disputes as well as the pocketbooks of the swing state's voters.
The campaigns of McCrory and Cooper already have raised more than $13 million combined and the Republican Governors Association has reserved $4 million in ad time for the fall. Cooper has leveraged Democratic frustration over the Republicans' control of state government into a formidable campaign operation, outraising McCrory three reporting periods in a row.
The governor and his allies have sought to narrow the public debate to the use of bathrooms by transgender people. It could appeal to moderates and independents in a state where registered Democrats outnumber Republicans by more than 650,000 people.
McCrory said overturning Charlotte's anti-discrimination ordinance was a common-sense action to protect the privacy of people who expect to share restrooms and locker rooms only with people who have the same anatomy.
"We'll continue to frame and push the fact of the matter that this legislation and this case involves bathrooms: Can a male use a female bathroom and female locker room?" said Chris LaCivita, McCrory's chief campaign strategist.
Cooper, in contrast, is already talking about how the law could affect the public more broadly. It prevents cities from requiring local businesses to provide paid sick leave or raise wages beyond the state's minimum, now pegged at $7.25 per hour. It also prevents workers from suing in state courts alleging workplace discrimination over factors including race, religion, age or gender.
"Obviously the LGBT community is targeted, but also people who are discriminated against based on race and religion and other classes of people could likely have a harder time bringing actions to protect themselves," Cooper said Tuesday.
Cooper contrasted McCrory's signing with Georgia Gov. Nathan Deal's decision Monday to veto a "religious freedom" bill, also criticized by corporations, some of which threatened to take business elsewhere without the veto.
These are the kinds of wedge issues that bring outside donors into swing states whose voters could side with either party, said Chris Cooper, a political science professor at Western Carolina University who is not related to the attorney general. "In some ways it works to nationalize the state election."
Framing the law as a "national embarrassment" helps Cooper "extend connections nationally and be able to raise money nationally," agreed Andrew Taylor, a professor at North Carolina State University.
Keeping the focus on bathrooms may help the Republicans for now. The longer voters pay attention to aspects of this law, the more likely it is to hurt McCrory, said Mac McCorkle, a Duke University professor and former consultant to two North Carolina Democratic governors.
"At some point the incumbent wants to turn the corner and start talking about what a great job he's been doing for North Carolina. And it's really hard to sell that to the people of North Carolina when there's so many questions about what went on," McCorkle said.
Associated Press 2016