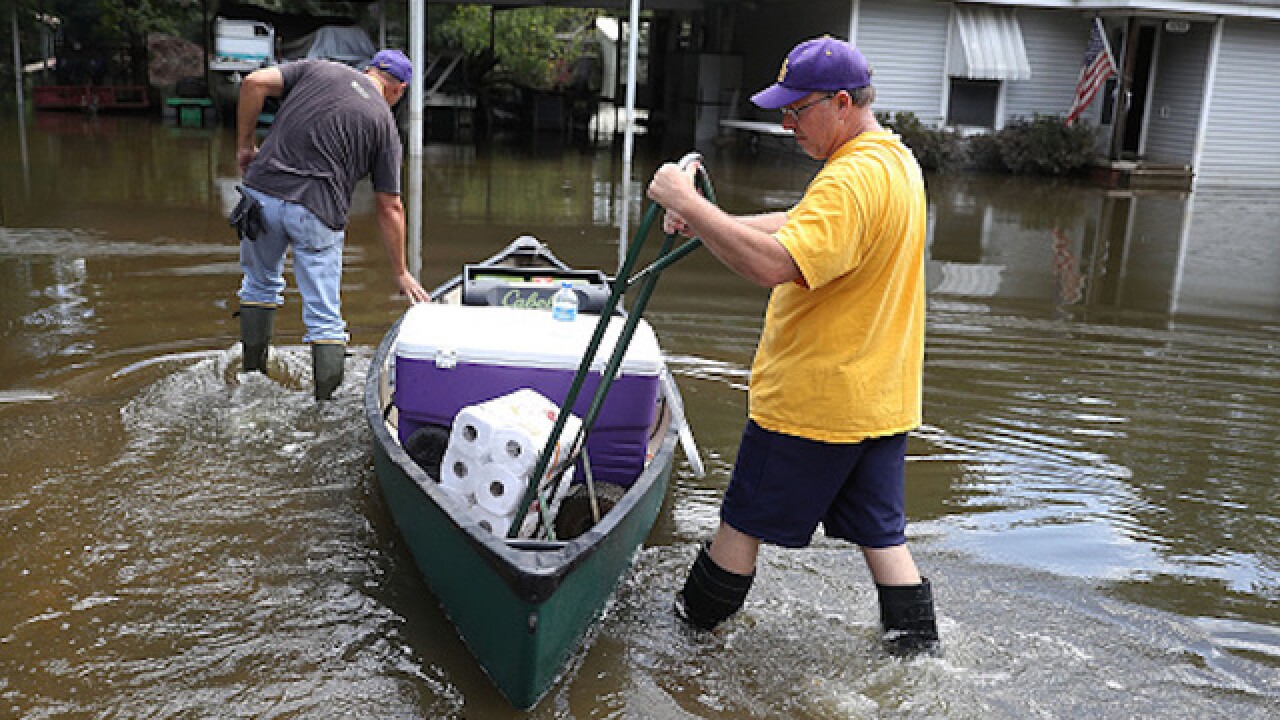 DENHAM SPRINGS, La. (AP) — In 23 years of coaching football, Dru Nettles never had to deliver a pep talk like this.

Most of his players and coaches on Denham Springs High School's football team lost homes when floodwaters ravaged their city in suburban Baton Rouge. Their battered school remains closed, but the team has a season-opening home game to play in two weeks.

Before they practiced Wednesday for the first time since the floods, Nettles sat them down on the purple logo at midfield and asked if they had seen aerial photographs of their inundated school.

"If you look at the back of campus, the one thing that didn't go underwater was this logo," Nettles said. "Awesome sign right there that this 'DS' was shining ... to give people hope."

The promise of Friday night football is tonic for a city at the epicenter of the catastrophe. Even the most modest signs of recovery are lifting weary spirits in Denham Springs, where flooding damaged an estimated 90 percent of homes and businesses.

Block by block, garbage trucks equipped with metal jaws are scooping up mounds of rancid debris from curbs and yards. Postal workers are delivering mail again. Insurance adjusters are inspecting gutted houses. A fast-food restaurant reopened near the interstate that had been underwater.

"Everybody is trying so hard to get back to normalcy as much as they can. Yes, we are seeing progress. Every day, we finally see another business come back online," said Denham Springs Mayor Gerard Landry.

But he fears it could take years for this city to fully recover after more than 2 feet of rain fell in the area over a three-day period two weeks ago.

"The devastating thing is that so many people didn't have flood insurance," Landry said. "In most parts of this city, it was not required."

Elvin Watts had no flood insurance for his shop in the touristy downtown antiques district. Watts, 69, estimates he lost up to $85,000 of inventory — almost everything he had inside Theater Antiques Mall.

"Little by little, it's going to the curb because it's starting to mildew," Watts said. "We're pretty much back to square one here."

Watts and his brother-in-law, John Houston, were cleaning up the shop Wednesday when a postal worker delivered his mail for the first time since the floods.

"Is that your renewal for your flood insurance?" Houston jokingly asked Watts, who laughed.

Richard and Bridgette Harrington moved into their dream home a few weeks before nearly 4 feet of water demolished the house and ruined more than $20,000 in brand-new furniture. Their flood policy doesn't cover the home's contents, including a $5,000 bed in which they slept just one night before the deluge came.

"The most expensive night's sleep ever," Richard Harrington said.

The Harringtons and their two daughters, 16 and 12, took a break from cleaning to watch a debris removal crew haul away their waterlogged possessions. At the bottom of the piles were an old doll that their youngest daughter, Bella, had named after herself and a toy wagon that once belonged to their son, now 20.

"It will feel like a new start if we can get this stuff taken away," Richard Harrington said.

"It's weird to be excited by your lifetime's collection being trashed," his wife added.

The floodwaters spared little in this city, where many of the 10,000 residents were drawn by top-notch public schools and proximity to Louisiana's capitol.

City Hall and the police department's headquarters both flooded. Landry has moved his staff to the old city hall, which had become a museum. Volunteers are helping repair police headquarters while dispatchers handle radio calls from a mobile command center in the parking lot.

Interim Police Chief Shannon Womack said car crashes have quadrupled on clogged roads since the water receded. Many residents are spending nights at motels or relatives' homes outside the city limits and driving back to town to work on their uninhabitable homes.

About a dozen of the police's department's 31 sworn officers have damaged homes. After two weeks of grueling work, the officers' morale is among the chief's greatest concerns.

"We will come out of this stronger than we came in, without a doubt," Womack said.

Relief workers have flocked to Denham Springs. In a parking lot outside a church-owned property, volunteers have served thousands of free meals and passed out carloads of clothes, cleaning supplies and other essentials to more than 4,000 families.

Ryan Frith, who will be the pastor at the new Healing Place Church once it opens, said his nascent congregation held its first service last Sunday in the parking lot. He set up 50 folding chairs, but 165 people showed up to worship. Frith said some of them belonged to flooded churches.

"It was very humbling," he said.

A football game at Denham Springs High School can draw thousands. The stands are bound to be filled when the team plays its first game Sept. 9.

Nettles said about a dozen of his 90 players couldn't make it to practice Wednesday — understandably, given how many have wrecked homes.

"Nothing you experience out here is going to be any tougher than you've had," Nettles told his players.

An assistant coach was surprised to see defensive end Ryan White take the field. His family lost a home. His father lost two business properties. They're moving to New Orleans, but the 16-year-old wanted to practice with his team one last time.

"These are my teammates and my brothers," he said. "It's hard leaving them, especially after what we've all been through together."

Team captain Dillon Boyle, a free safety, said he has helped gut seven homes, including three belonging to his family. Returning to practice, even in punishing summer heat, was a welcome diversion.

"I wouldn't say it felt normal, but I'd say we feel like more of a team now," he said. "Being with my friends again is a big relief."

The school's band rehearsed Thursday for the first time since the storm, practicing the Star Spangled Banner and singing their school's alma mater. Band director Andrew Hunter said many of them arrived an hour early.

"Just beating us to the door, ready to go. Hugging each other. Catching up. Talking about how many feet of water they got in their homes," Hunter said. "That's what we talk about now."