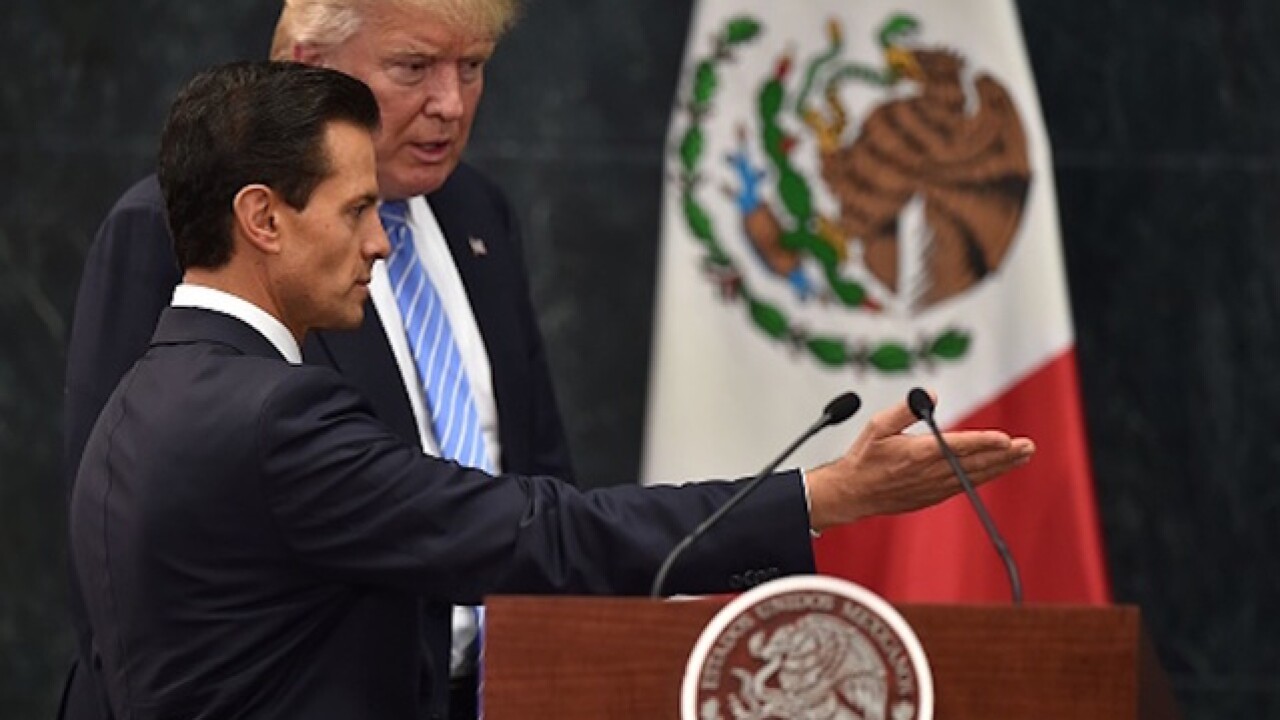 Copyright 2018 Scripps Media, Inc. All rights reserved. This material may not be published, broadcast, rewritten, or redistributed.
YURI CORTEZ
US presidential candidate Donald Trump (R) and Mexican President Enrique Pena Nieto prepare to deliver a joint press conference in Mexico City on August 31, 2016. Donald Trump was expected in Mexico Wednesday to meet its president, in a move aimed at showing that despite the Republican White House hopeful's hardline opposition to illegal immigration he is no close-minded xenophobe. Trump stunned the political establishment when he announced late Tuesday that he was making the surprise trip south of the border to meet with President Enrique Pena Nieto, a sharp Trump critic. / AFP / YURI CORTEZ (Photo credit should read YURI CORTEZ/AFP/Getty Images)

Pena Nieto tried gamely to take the high road and avoid arguing with Trump, who didn't waver an inch in his plans to build a wall along the two countries' border.

Trump called Mexican-Americans "spectacular" and "amazing," and Pena Nieto mentioned disagreements and the fact that Mexicans felt "aggrieved," but Mexico's president never did what people here wanted most: demand that Trump apologize for suggesting that many Mexican migrants are rapists or criminals.

"Trump didn't alter his positions one little bit," Hope said. "He just dressed them up a little in less incendiary language." Of Pena Nieto, Hope said "in the end, he gave Trump an opportunity to show off, while getting nothing in return. Good work, guys."

Trump "came for a photo op and Enrique Pena Nieto allowed himself to be used to benefit his (Trump's) campaign," said columnist Jorge Zepeda.

Trump's contention that illegal immigration and the flight of manufacturing jobs were hurting Mexicans too did little to win hearts and minds south of the border.

News anchor Carlos Loret de Mola tweeted grimly, "Trump can leave in peace. The humiliation has been carried out."

And writer Angeles Mastretta wrote in her Twitter account, "what was expected: a president who isn't capable of demanding apologies ... how sad."

On the whole, Mexicans reacted with disappointment and disgust that Trump had even been invited. After all, Mexicans have already made — and beaten to pulp — pinatas of Donald Trump. They created a video game in which players can throw soccer balls, cactus leaves and tequila bottles at a cartoon image of Trump.

But when the man himself came to Mexico, he was treated with kid gloves and given a warm reception at the presidential residence. The damage didn't accrue to Trump, but it may well hurt Pena Nieto, whose popularity is already at an all-time low near 20 percent, according to recent polls.

Artist Arturo Meade joined one of the few small protests prior to the meeting with his 2 ½-year old son Mariano, and shook his head in disgust.

"This is an insult and a betrayal," Meade said. "What can this meeting bring us, except surrealism in all its splendor?"

Former President Vicente Fox told local media that Trump was trying to boost his sagging campaign. "He fooled him (Pena Nieto) ... he's using him to try to recover lost votes."

Many Mexicans felt the Republican candidate had left Pena Nieto flat-footed by accepting an invitation the Mexican president had made simply for appearances' sake.

The newspaper El Universal wrote in an editorial that Trump "caught Mexican diplomats off guard" by accepting the invitation, and "got one step ahead of them."

"They wanted to invite Hillary (Clinton), but that meant inviting both of them and nobody thought Trump would accept first," said Mexico City-based security analyst Alejandro Hope. "What's in it for Mexico? Here there's nothing to gain. The upside is all for Trump."

Historically, the golden rule of Mexico's foreign policy has been to avoid being seen as taking sides in U.S. politics; hence the two invitations, even though Mexico favors Hillary Clinton's position on a path to citizenship for migrants.

Pena Nieto acknowledged he had invited both candidates, and said he did it because "I believe in dialogue to promote Mexico's interests and above all to protect Mexicans everywhere."

Abraham Garnica, 31, who works as an engineer in Mexico City, was left like most Mexicans, scratching his head while trying to think of a reason why Pena Nieto might have agreed to the meeting.

"They must be afraid he might win, and so they're saying, 'Just in case, we'll shake his hand," Garnica said. "I myself, I wouldn't have invited him."

Yolanda Herrera, a 66-year-old Mexico City housewife, sought glumly to put the best light on what, to many, felt like a national humiliation.

"let's hope that ... he sees that he was really wrong about what he said," Herrera said of Trump. "I think this is a display of the fact that we Mexicans are a very sympathetic people."