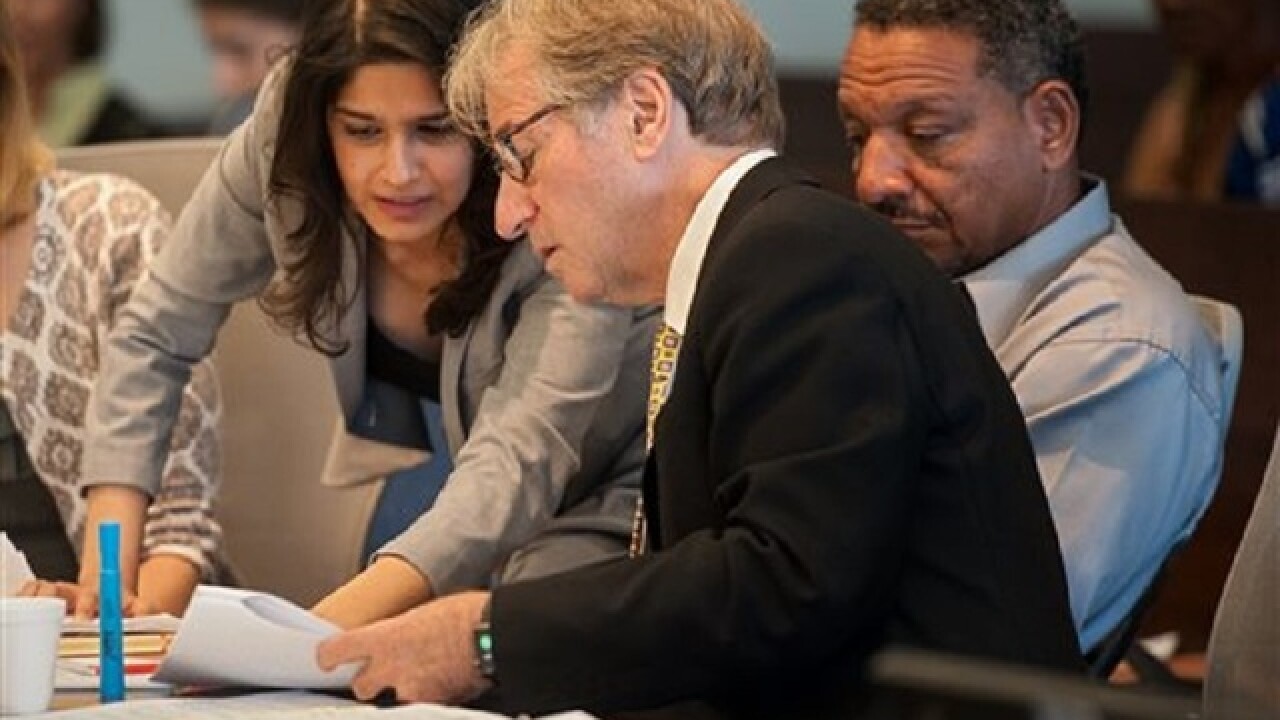 DURHAM, N.C. (AP) — A North Carolina man was freed from jail Wednesday after a judge tossed his conviction in a double-murder case tried 21 years ago by the prosecutor who was later disbarred for lying and misconduct in the Duke University lacrosse rape case.
The judge threw out the convictions and ordered Darryl Howard's release because of DNA evidence unavailable at Howard's 1995 murder trial.
The former district attorney in the Duke case, Mike Nifong, had been expected to testify Wednesday afternoon about his handling of Howard's case and whether misconduct from police and prosecutors helped win a conviction. But prosecutors decided not to appeal the judge's order tossing the conviction, which meant Nifong did not have to take the stand and cleared the way for Howard to be freed.
"There's no time to be angry," Howard said in the courtroom. "I'm thankful this is over and I can move on with my life and do other things. I'm just happy right now."
He later left the jail hand-in-hand with his wife, Nannie, whom he married three years after he was imprisoned. Howard credited her with pursuing lawyers who work on wrongful conviction cases; his conviction and 80-year sentence was eventually taken up by the New York-based Innocence Project. Howard said they look forward to building a life together.
"The journey has been long, but we made it," Nannie Howard said, adding she's finally able to hug her husband without restraints on his arms. "We have a lifetime of memories to create and do things that we haven't had a chance to do, so we're looking for that next great chapter."
Howard was convicted of the 1991 strangling and sexual assault of 29-year-old Doris Washington and her 13-year-old daughter, Nishonda. But DNA evidence shows Howard did not rape the women, and no other physical evidence connected him to the crime. Superior Court Judge Orlando Hudson said Wednesday that evidence would have created a reasonable doubt for jurors.
Hudson said prosecutors would have to retry Howard, who was convicted based heavily on the testimony of witnesses at the Durham public housing project where the slayings occurred, or drop the case.
The judge had first ordered Howard's release from prison two years ago. But prosecutors appealed at the time, and a state appeals court ruled this spring that Hudson failed to hear enough evidence before making a decision.
Defense attorney Barry Scheck said he thought it was unlikely that prosecutors would retry Howard because of the contradictory evidence offered by witnesses at his original trial, signs of misconduct by prosecutors and police and lack of physical evidence. The fact that prosecutors didn't seek the death penalty against Howard for such a brutal crime and murder signaled that they knew even then that they had a weak case, said Scheck, who also defended O.J. Simpson at his 1995 murder trial.
One courtroom observer said it was no surprise prosecutors decided not to retry the case, which would have involved Howard's lawyers presenting evidence of misconduct by the Durham district attorney's office during Nifong's tenure.
It would have "unearthed the skeletons in the district attorney's office once again for the public to hear," said Jamie Lau, an attorney with the Wrongful Convictions Clinic at the Duke University law school. "Given the history of the DA's office, having their past skeletons paraded out again is likely something that nobody wanted."
The judge said in his 2014 ruling that Nifong failed to share with defense attorneys a police memo and other evidence that pointed to suspects other than Howard. A Durham police detective testified at Howard's trial that investigators never considered that the sexual assaults were linked to the killers. Nifong repeated that claim despite a police memo in the prosecution's files that contradicted him.
In the Duke case, three athletes were accused of raping a stripper hired to entertain a team party. State investigators later determined Nifong lied and buried evidence proving the lacrosse players were innocent.
DNA evidence presented at Howard's 1991 trial showed he was not responsible for sexually assaulting Nishonda Washington before her murder. Whoever did assault Nishonda hasn't been identified.
But DNA tests unavailable at the time of Howard's original trial identified the man who had sex with Doris Washington shortly before her 1991 death as Jermeck Jones, who dated Nishonda before her death. He was identified from DNA samples stored in a federal database, which was collected after Jones was sentenced to prison in Tennessee.
Jones served nearly four years in Tennessee prisons before his release in late 2007 for crimes including possession of a weapon by a convicted felon, failure to appear in court, drug possession and reckless endangerment with a deadly weapon.
Jones on Tuesday refused to answer questions from Howard's attorneys, citing his constitutional right against incriminating himself.
Copyright 2016 The Associated Press. All rights reserved. This material may not be published, broadcast, rewritten or redistributed.