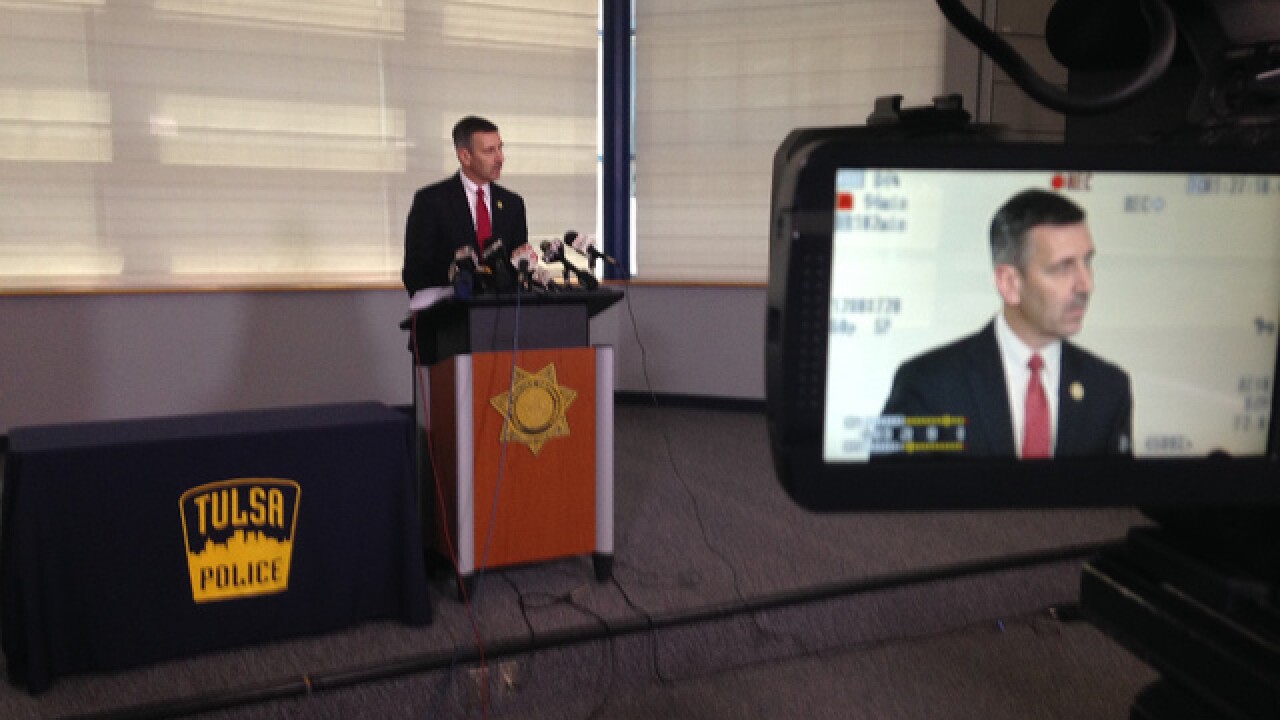 TULSA, Okla. (AP) — An attorney for a white Oklahoma police officer who fatally shot an unarmed black man has said the man ignored officers' commands and was reaching through a window of his SUV when he was killed.

But police video from the incident Friday shows 40-year-old Terence Crutcher walking away from the officers and toward his SUV with his hands up when one officer shocks him with a stun gun and he falls to the ground. He is then shot and killed. Police were called to the scene to respond to a report of a stalled vehicle.

Police Chief Chuck Jordan announced Monday, before the video and audio recordings were released, that Crutcher had no weapon on him or in his SUV when he was shot. It's not clear from the footage what led Betty Shelby, the officer who fired the fatal shot, to draw her gun or what orders officers gave Crutcher. Shelby's attorney, Scott Wood, said Crutcher was not following the officers' commands.

The videos may be too graphic for some viewers. Watch with discretion.

Click here to see the videos released by Tulsa Police.

"He has his hands up and is facing the car and looks at Shelby, and his left hand goes through the car window, and that's when she fired her shot," Wood told the Tulsa World for a report Tuesday.

Local and federal investigations are underway to determine whether criminal charges are warranted in the shooting or if Crutcher's civil rights were violated.

Tulsa police helicopter footage was among several clips showing the shooting of Crutcher and its aftermath. In that video, a man in the helicopter that arrives above the scene as Crutcher walks to the vehicle can be heard saying "time for a Taser." He then says: "That looks like a bad dude, too. Probably on something."

Police video shows Crutcher walking toward his SUV that is stopped in the middle of the road. His hands are up and a female officer is following him. As Crutcher approaches the driver's side of the SUV, three male officers walk up and Crutcher appears to lower his hands and place them on the vehicle. The officers surround him, making it harder to see his actions from the dashboard camera's angle.

Crutcher can be seen dropping to the ground. Someone on the police radio says, "I think he may have just been tasered." One of the officers near Crutcher backs up slightly.

Then almost immediately, someone can be heard yelling, "Shots fired!" Crutcher's head then drops, leaving him completely lying out in the street.

After that, someone on the police radio can be heard saying, "Shots fired. We have one suspect down."

The shooting comes just four months after former Tulsa County volunteer deputy Robert Bates was sentenced to four years in prison on a second-degree manslaughter conviction in the 2015 death of an unarmed black man. Bates said he mistakenly grabbed his gun instead of his Taser. Shelby worked as a Tulsa County sheriff's deputy for four years before joining the Tulsa Police Department in December 2011, officials said. She has been placed on paid leave.

The initial moments of Crutcher's encounter with police are not shown in the footage, and Wood said the situation unfolded for about 2 minutes before the videos began. Shelby did not activate her patrol car's dashcam, said police spokeswoman Jeanne MacKenzie, and the ground-level video released Monday came from the car of a second officer who arrived at the scene.

Initial police briefings indicated Crutcher was not obeying officers' commands, but MacKenzie said Monday she didn't know what Crutcher was doing that prompted police to shoot. Two 911 calls described an SUV that had been abandoned in the middle of the road. One unidentified caller said the driver was acting strangely, adding, "I think he's smoking something."

After the shooting, Crutcher could be seen lying on the side of the road, blood pooling around his body, for nearly two minutes before anyone checked on him. When asked why police did not provide immediate assistance, MacKenzie said: "I don't know that we have protocol on how to render aid to people."

The American Civil Liberties Union of Oklahoma, which also called for charges, said Crutcher was left to bleed while officers stood by. The group's executive director, Ryan Kiesel, said Crutcher's death shows "how little regard" Tulsa police have for the community's minorities.

U.S. Attorney Danny C. Williams said the Department of Justice will conduct a civil rights investigation to determine if charges should be brought in the case.

"When unarmed people of color break down on the side of the road, we're not treated as citizens needing help. We're treated as, I guess, criminals — suspects that they fear," said Crump, who is representing Crutcher's family just as he did relatives of Trayvon Martin, an unarmed, black Florida teenager who was fatally shot by a neighborhood watch volunteer in 2012.

He said Tulsa police drew their own conclusions about Crutcher.