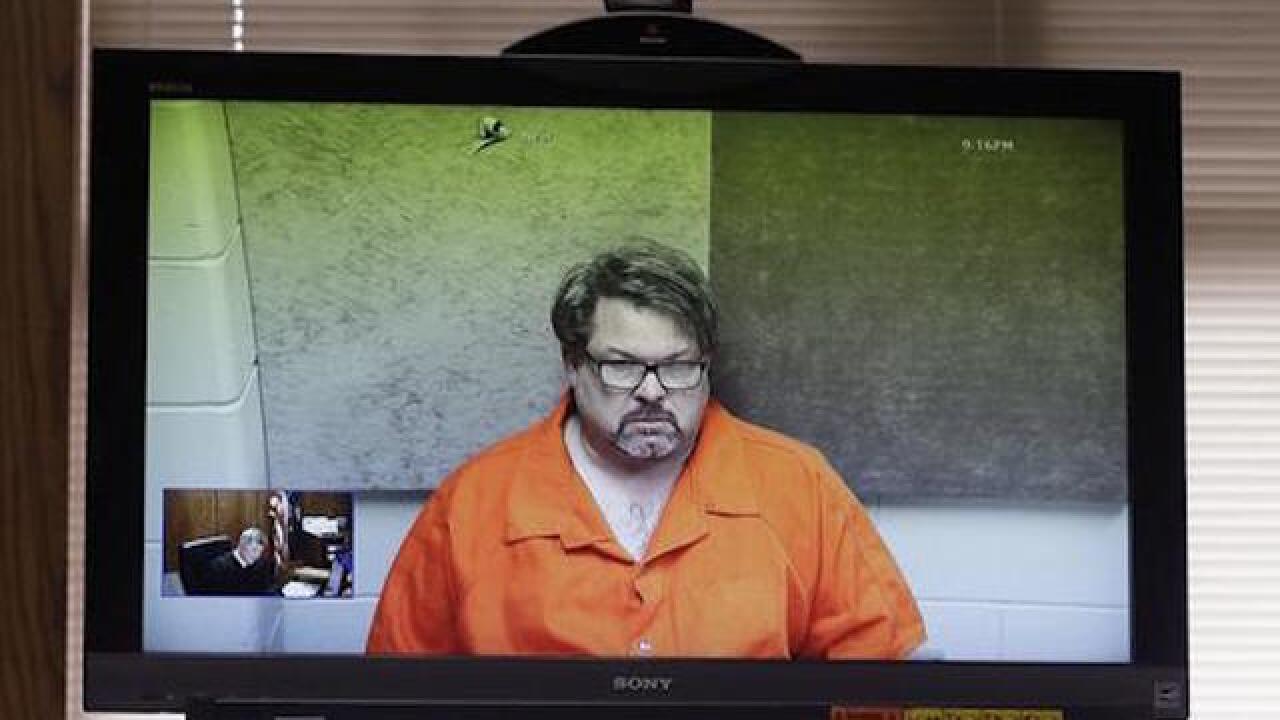 Carlos Osorio
<p>FILE- In a Feb. 22, 2016 file photo, Jason Dalton, of of Kalamazoo Township, Mich., is arraigned via video in Kalamazoo, Mich. Dalton, charged with killing six people in a series of shootings in southwestern Michigan, had warned his wife the night of the shootings that she wouldn't be able to return to work and their children couldn't go back to school and she'd understand everything by watching TV news. (AP Photo/Carlos Osorio, File)</p>

DETROIT (AP) — A man charged with killing six people in a series of shootings in southwestern Michigan interspersed with stints as an Uber driver told investigators he was being controlled by the ride-hailing app through his cellphone, police said Monday.

According to a police report, Jason Dalton told authorities, "it feels like it is coming from the phone itself" and he didn't know how to describe that. He also described something "like an artificial presence," the report said.

Dalton is charged with murder and attempted murder in the Kalamazoo-area shootings Feb. 20 outside an apartment complex, a restaurant and at a car lot. Two people survived. Investigators say Dalton didn't know the victims and described the shootings as "random." They still are trying to determine a motive. A judge earlier this month ordered Dalton to undergo a mental competency exam.

The details are in documents released by the Kalamazoo Department of Public Safety and Kalamazoo County sheriff's office in response to public records requests by The Associated Press and others.

Police said in the report that Dalton said "he is not a killer and he knows that he has killed." Dalton added it's "scary" because he "isn't sure how much he had or had not done," and was afraid "that maybe he could've killed his family," according to the report.

Dalton's wife had told investigators he warned her the night of the shootings that she wouldn't be able to return to work and their children couldn't go back to school — and she'd understand everything by watching TV news, police reports said.

Carole Dalton told investigators she was stumped by what her husband said. At that time, the first shooting had already occurred.

Dalton was talking with his wife at his parents' house, according to the police reports. The car he intended to take wouldn't start so he planned to take another that would leave her without transportation to go home and get clothing for her and their children.

Dalton told his wife that he would try to grab some things for them while he was out, but they "couldn't go back to work anymore and the kids could not go back to school."

Dalton later told police he doesn't remember telling anyone to watch the news.

He also told police he couldn't recall how many people he had picked up that day as part of his work with Uber, what happened before the shootings at a Cracker Barrel restaurant or how many incidents there were.

Uber security chief Joe Sullivan said last month that Dalton cleared a background check and was approved to be a driver on Jan. 25. He had given slightly more than 100 rides and had a rating of 4.73 stars out of a possible five. Until Feb. 20, Sullivan said, Uber had no reason to believe anything was amiss and that "no background check would have flagged and anticipated this situation."

Dalton did tell investigators that he owned quite a few guns.

"Dalton proceeded to tell us that he couldn't imagine when he had bought them all that he would use them in this manner," according to the report. "Dalton then said that is why he is trying to tell us it is like an artificial presence."