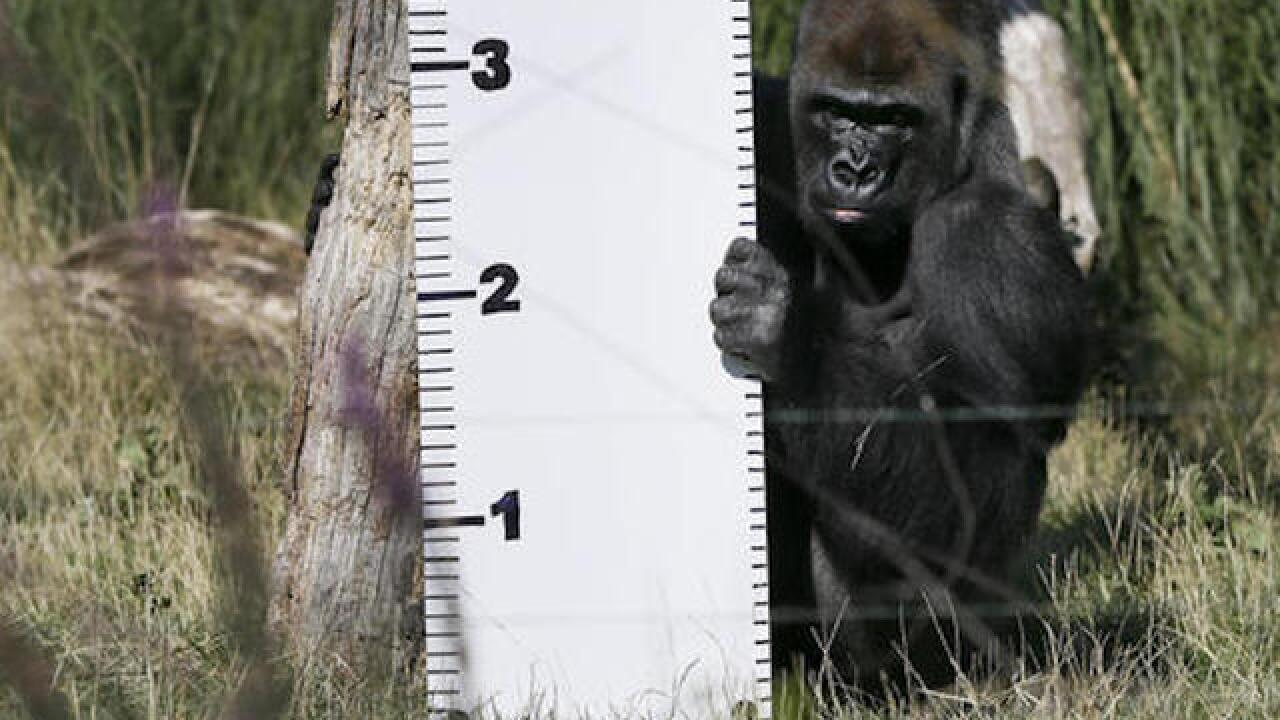 Copyright Associated Press
Kirsty Wigglesworth
<p>In this Thursday, Aug. 21, 2014 file photo, Kumbuka, a Silverback Western Lowland Gorilla sits next to a ruler during a photocall at London Zoo. Management of London Zoo said Friday, Oct. 14, 2016 that a silverback gorilla’s escape from its enclosure was a “minor incident” that posed no danger to the public. But a wildlife advocacy group said the incident, which ended without injuries to visitors or the animal, could have had a more tragic outcome, and is calling for an official investigation. (AP Photo/Kirsty Wigglesworth, File)</p>

LONDON (AP) — London Zoo said Friday that a silverback gorilla's escape from its enclosure was a "minor incident" that posed no danger to the public — but animal rights activists are demanding an official, independent investigation.

A wildlife advocacy group said the incident, which ended without injuries to visitors or the animal, could have had a more tragic outcome.

Kumbuka, a 400-pound (184-kilogram) male western lowland gorilla, escaped from his enclosure Thursday evening into what the zoo said was a "secure keepers' area."

Armed police descended on the zoo and visitors were locked inside buildings until the animal was subdued by a tranquilizer dart. Officials said the public was not in danger and the gorilla was back in his enclosure in just over an hour.

"In the zoo, we train throughout the year for a variety of different emergency procedures, often in collaboration with the emergency services," said Malcolm Fitzpatrick, the zoo's curator of mammals. "It's testament to that training that this incident was dealt with so quickly and remained a minor incident."

Some witnesses reported that the gorilla had been behaving aggressively and banging on the glass of his enclosure before his escape. Fitzpatrick said Kumbuka did not break through the glass — but would not say how he got out.

Fitzpatrick said Kumbuka was back with his gorilla family Friday, "doing very well" and had been given extra treats after his brief escape.

The zoo said an investigation into the escape is underway.

The Born Free Foundation, which campaigns for zoos to be phased out, said the incident was a reminder of the risks of keeping dangerous wild animals in captivity.

"This incident could have ended very differently," said the foundation's Chris Draper. "We are calling for an urgent inquiry into the circumstances surrounding this escape, and into safety procedures at London Zoo."

Several recent incidents have raised concerns about the safety and ethics of keeping large primates in zoos.

In May, a gorilla named Harambe was shot dead at the Cincinnati Zoo after it grabbed a 4-year-old boy who had fallen into a moat.

In 2007, a 400-pound gorilla escaped from an enclosure and ran amok at a Rotterdam zoo in the Netherlands, biting one woman and dragging her around before he was finally subdued.

Fitzpatrick said Kumbuka and the other gorillas at London Zoo help to fulfill the zoo's mission to inspire a passion for the animal world in visitors.

"Kumbuka is a fantastic silverback gorilla, and when you see him interacting with his son and daughter, it really inspires our visitors," he said. "And we hope that they themselves will then have a lifelong connection to animals, habitats and helping to conserve them."