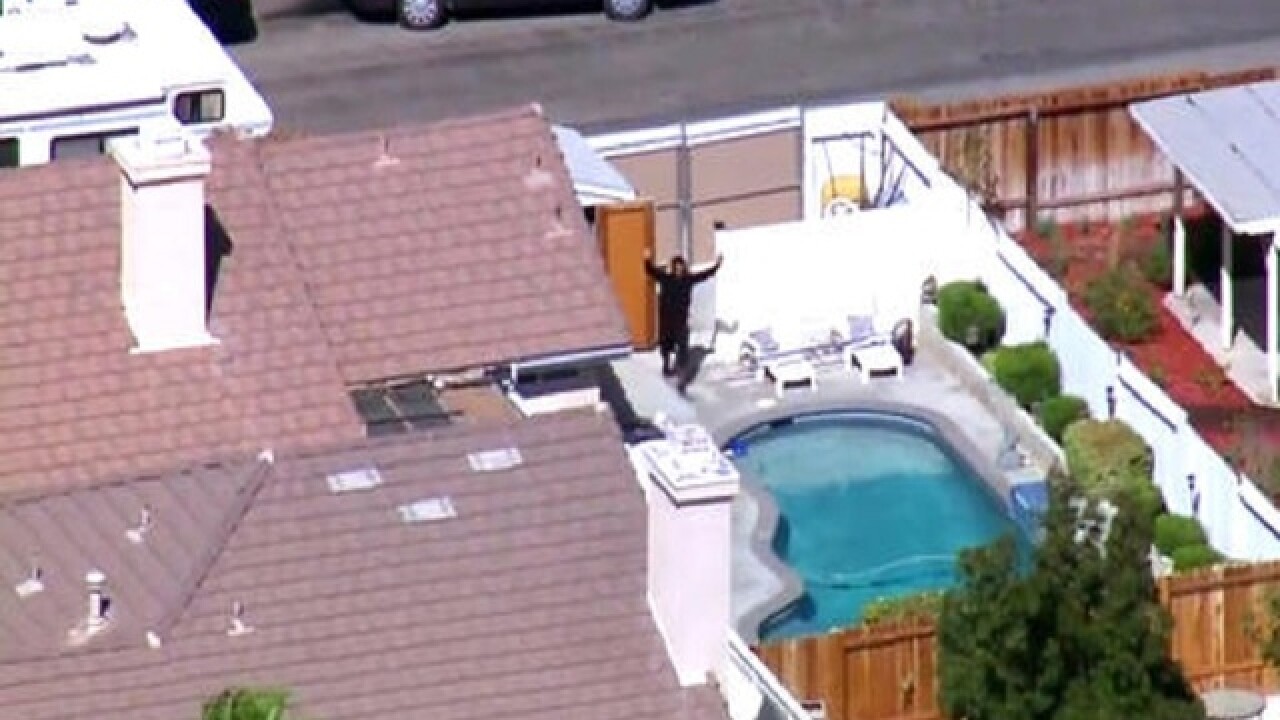 LOS ANGELES (AP) — A Los Angeles County sheriff's sergeant was shot and killed Wednesday while answering a burglary report and the suspected gunman was arrested after commandeering his patrol car, ramming a second police vehicle, then hiding in a home as two teenagers cowered, authorities said.
Sgt. Steven Owen, 53, died at a hospital about two hours after he was gunned down behind a home in Lancaster, a desert community north of Los Angeles. His mother, adult son and daughter and his wife, who is a detective in the Sheriff Department's Arson/Explosives Detail, were at his bedside when he died, said Neal B. Tyler, the Sheriff's Department interim sheriff and executive officer.
"This is the thing we all dread," Tyler said at a news conference.
Owen, who also is survived by another adult son, was a 29-year decorated veteran, authorities said.
He was shot in the face with a large-caliber bullet that fragmented, said Mayor R. Rex Parris, who knew Owen for 10 years.
"I just left 100 officers crying. It's indescribable seeing that many sheriff's deputies in tears," Parris said.
"They brought him back three times. They worked on him for an hour but they were never able to stabilize him," Parris said.
Another deputy received injuries and was examined at a hospital but he wasn't shot, authorities said.
Owen was shot in the backyard at around 12:30 p.m. after he answered a report of a burglary in progress at an apartment building on West Avenue J-7.
Investigators said another deputy in front heard gunfire, ran around the building and found Owen wounded.
It wasn't immediately clear whether Owen managed to shoot back, sheriff's homicide Capt. Steven Katz said.
The deputy chased the gunman, who ran to Owen's radio car, got in and tried to steal it. The suspect was shot at twice, once as he tried to take the patrol car and again as he backed up and rammed a second patrol car, Katz said.
As deputies sealed off the neighborhood, the gunman ran to a house where a teenage boy and girl managed to hide and use a cellphone to text sheriff's deputies, authorities said.
It wasn't clear whether the attacker knew they were there, Katz said.
SWAT team members entered the home to rescue the pair and the suspected gunman fled out the back door and was captured after climbing over a wall, officials said.
News reports showed a bloody, shirtless man on his knees being handcuffed.
The man, identified only as a parolee, was taken to a hospital for treatment of a gunshot wound to his upper body, investigators said.
Katz said a weapon was found.
In 2014, Owen was one of several deputies from the Lancaster station who were honored by the Sheriff's Department after they captured a gunman in a bulletproof vest who had taken a driver hostage and used him as a human shield after a police chase. Owens and the others received the Meritorious Conduct Medal, Go
Copyright 2016 The Associated Press. All rights reserved. This material may not be published, broadcast, rewritten or redistributed.