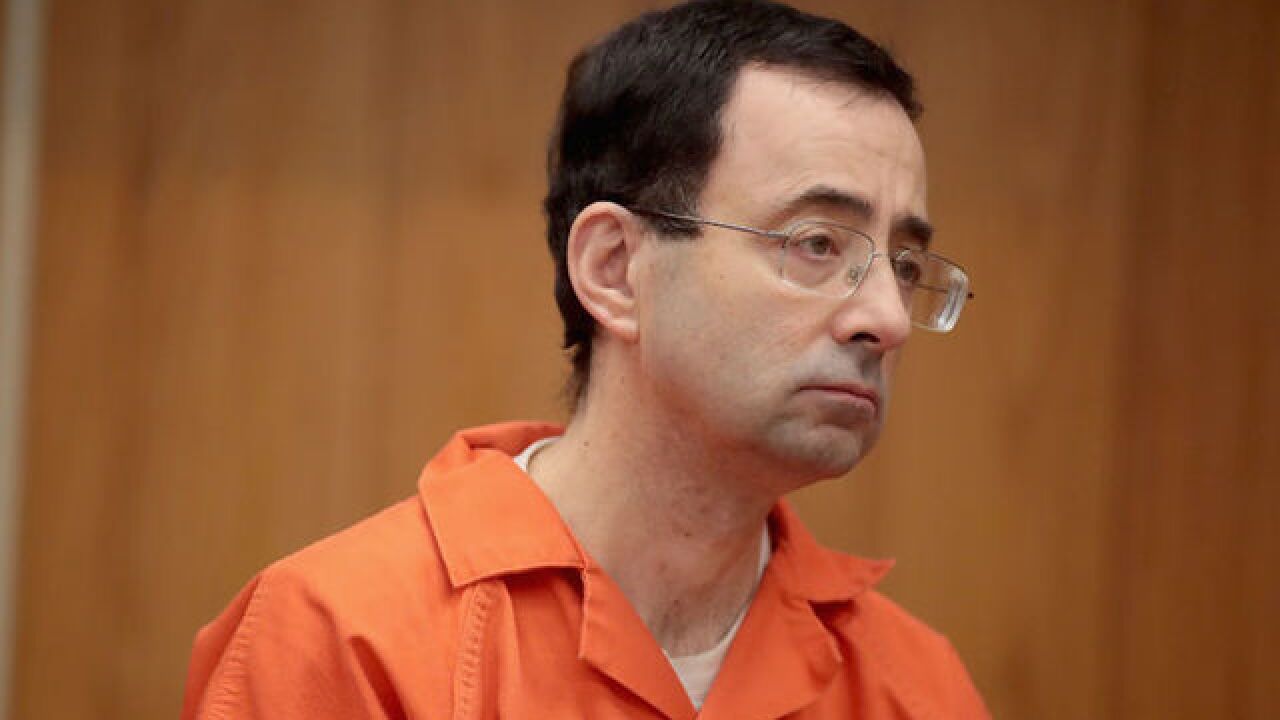 Image copyright 2018 Getty Images. All rights reserved. This material may not be published, broadcast, rewritten, or redistributed.
Scott Olson
<p>Larry Nassar stands as he is sentenced by Judge Janice Cunningham for three counts of criminal sexual assault in Eaton County Circuit Court on February 5, 2018 in Charlotte, Michigan. </p>

The Journal, citing sources who are familiar with the matter, said the Justice Department's inspector general is looking into whether any FBI agents failed to respond in a timely manner to gymnasts' complaints in 2015.

The investigation could lead to disciplinary action and criminal charges, the Journal reported.

Nassar pleaded guilty last year to state charges of criminal sexual conduct and federal charges of child pornography. He was sentenced to up to 175 years in prison after hundreds of women and girls said he sexually abused them over the past two decades under the guise of providing medical treatment.

The Journal said a spokesperson for the Inspector General's office declined to comment on its reporting.

CNN is working to independently verify the Journal's report and has reached out to the FBI for comment.

Attorney John Manly, who represents 180 gymnasts, said the FBI as well as USA Gymnastics and the US Olympic Committee knew in July 2015 that Nassar, who was then a physician for Michigan State University, had molested three athletes.

"Their inaction allowed Nassar to return to MSU for more than a year and molest another 60 girls before he was finally arrested in November of 2016. That is inexcusable and possibly criminal," Manley said in a statement provided to CNN in response to the Journal article. "A thorough and complete investigation needs to be undertaken. We owe it to these girls and their families."

USA Gymnastics, the governing body for the sport in the United States, has said it "reported Nassar to the FBI in July 2015 and to a different FBI office again in April 2016."

The Justice Department is trying to determine whether any FBI field offices failed to act on claims from Nassar's victims, according to the Journal.

Authorities are reviewing the interactions that agents in different field offices, including the Indianapolis office, had with former Olympian McKayla Maroney and USA Gymnastics Chief Executive Steve Penny, the Journal reported, citing sources familiar with the matter.

Fallout following the Nassar scandal continued this week within the ranks of USA Gymnastics.

USA Gymnastics president and CEO Kerry Perry resigned Tuesday after just nine months on the job. She was widely criticized for what many considered to be inadequate action and boilerplate soundbites following the scandal.

Last week, Mary Lee Tracy, the beleaguered organization's elite development coordinator, was asked to resigned after three days on the job after she "inappropriately contacted a [Nassar] survivor, who is also a represented plaintiff, in response to that survivor's public criticism of her."

Several other staffers, including the head of USAG women's program and the coordinator for the women's national team, also left the organization this year.