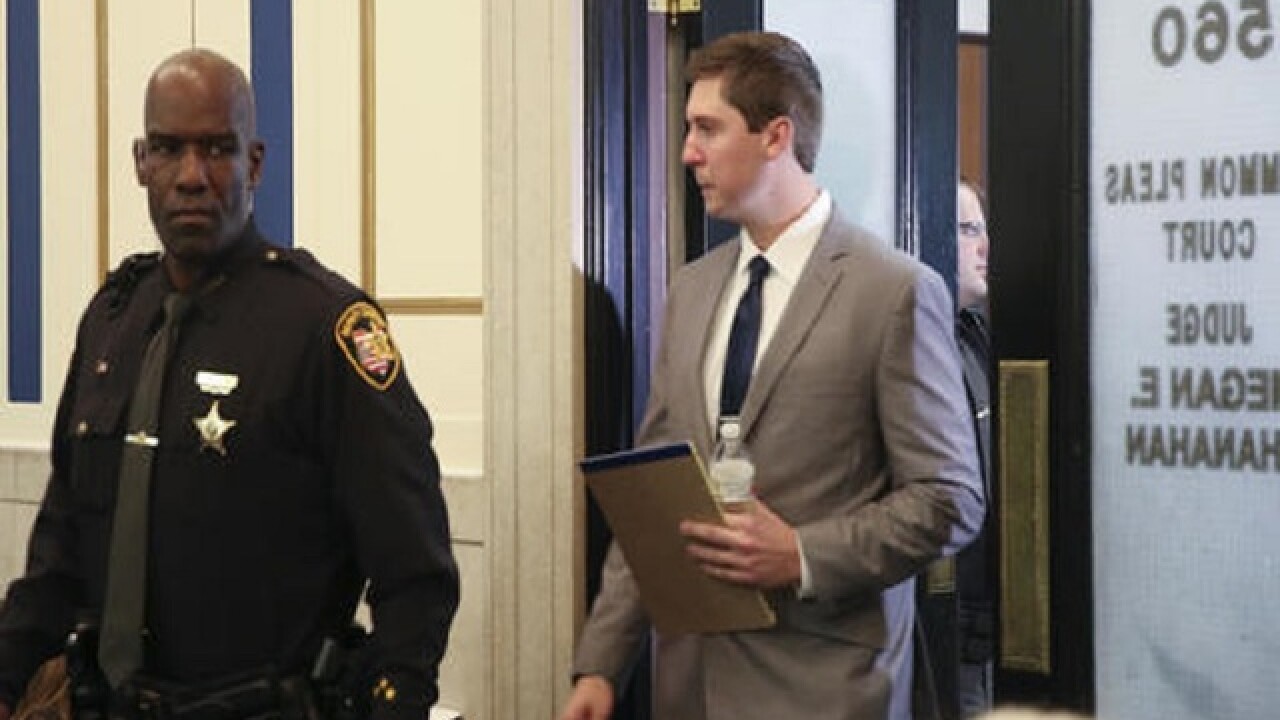 Cara Owsley
<p>Ray Tensing walks into court on the day of closing arguments in his trial, Wednesday, Nov. 9, 2016, in Cincinnati. The former University of Cincinnati police officer is charged with murdering Sam DuBose while on duty during a routine traffic stop on July 19, 2015. (Cara Owsley/The Cincinnati Enquirer via AP, Pool)</p>

CINCINNATI (AP) — Jurors are set to resume deliberations in the murder trial of a white former police officer who said he feared for his life before fatally shooting an unarmed black man during a traffic stop over a missing front license plate in Ohio.
Hamilton County Judge Megan Shanahan sequestered the jurors Wednesday night, telling them that they would resume deliberating Thursday morning.
Before they got the case, Shanahan instructed them to apply the law to the facts presented in court, and to judge the facts "from the perspective of a reasonable officer at the scene," not in "20-20 hindsight."
Prosecutors want the jurors to conclude that now-fired University of Cincinnati police officer Ray Tensing "purposely" killed Sam DuBose. Jurors also have the option of convicting him of voluntary manslaughter, meaning he killed in a fit of rage or sudden passion after being provoked.
Tensing, 26, has said he shot DuBose, 43, while being dragged by DuBose's car as he tried to drive away on July 19, 2015.
The prosecution said evidence including Tensing's own body camera video contradicted his story.
"The video is the ultimate witness ... this video exposes Tensing's lies," Hamilton County Prosecutor Joe Deters said during closing arguments.
He said Tensing and his lawyer became "almost comical with their word games," calling shooting DuBose "stopping the threat" and saying he "perceived to be dragged."
But defense attorney Stewart Mathews insisted Tensing was trying to keep from being run over.
"He was in sheer terror," Mathews told jurors. "The evidence is very clear that a car can be just as deadly as a gun or knife."
He said prosecutors tried to use race as "a smokescreen." They pointed to Tensing's T-shirt worn under his uniform that day. The "Great Smoky Mountains" shirt had a Confederate flag on it. Mathews said it had "no evidentiary value."
City officials met with civil rights and faith leaders in the weeks before the trial, trying to reduce tensions over a racially charged case that brought demonstrators — including Black Lives Matter activists — outside the courthouse. It is among cases nationwide that have raised attention to how police deal with blacks.
Deters told jurors Wednesday that "emotions are high," but they must decide based on the facts.
Tensing wept on the stand Tuesday. He said his arm was stuck in DuBose's car at the time and the car was turning toward him.
Deters asked Tensing about an outside report that eight out of every 10 drivers that Tensing pulled over for traffic stops were black, the highest rate of any University of Cincinnati officer.
Tensing said he was often unaware of a driver's race, did not single people out unfairly and wasn't racist.
Witnesses testified that DuBose had significant amounts of marijuana and cash on him, which Mathews described as a reason why he was desperate to flee.
Copyright 2016 The Associated Press. All rights reserved. This material may not be published, broadcast, rewritten or redistributed.