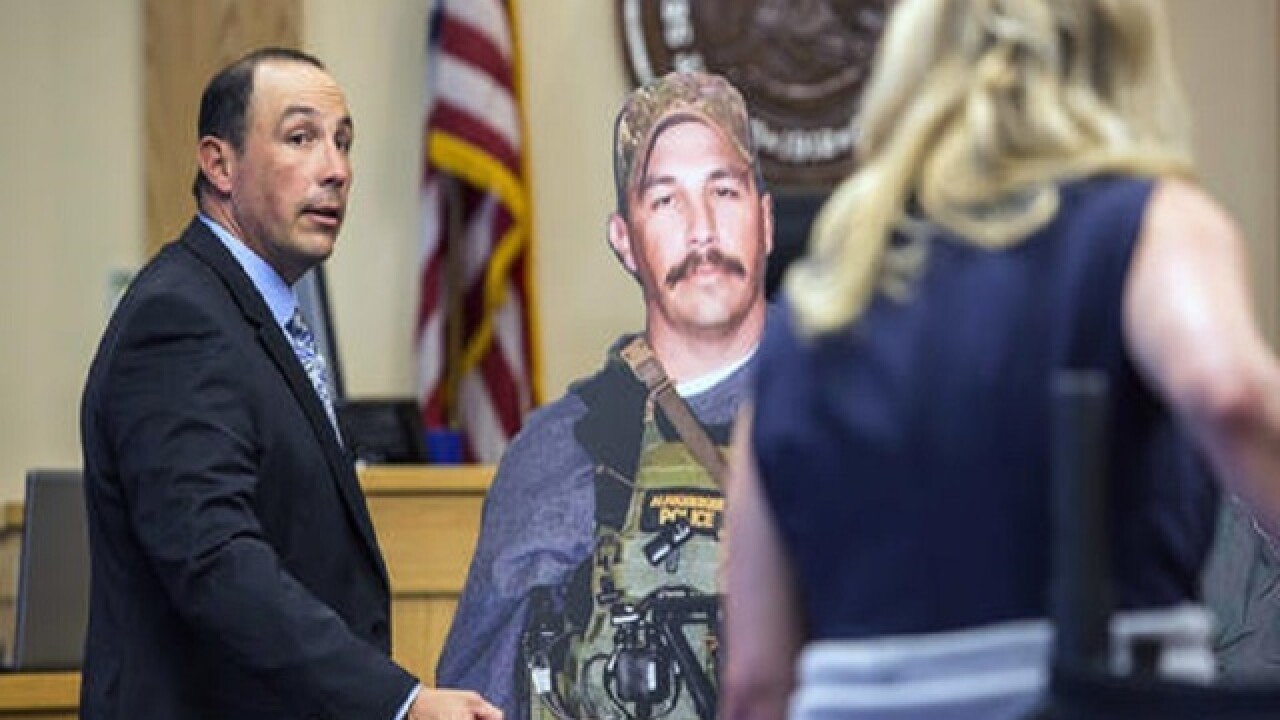 ALBUQUERQUE, N.M. (AP) — Jurors began deliberating Thursday in a murder case against two former New Mexico police officers who prosecutors said killed a mentally ill homeless man as he tried to surrender and defense attorneys countered was armed with two knives and posed a threat.
The three-week trial scrutinized how and when police should deploy force or deescalate encounters with people suffering from mental illness at a time when shootings by police have become a national conversation.
The final seconds of an hours-long standoff between Albuquerque police and James Boyd in the foothills of the Sandia Mountain have been in dispute since the 2014 shooting touched off protests and calls for police reform in Albuquerque, the largest city in the state.
In closing arguments, special prosecutor Randi McGinn said a flashbang-grenade went off and a K-9 unit advanced on Boyd during the final moments of the confrontation.
She said police video showed Boyd briefly shifting from side to side with two knives in hand before he turned to his left toward the K-9 handler and was shot from a few feet away by then-Officer Dominique Perez and detective Keith Sandy.
She disputed a contention by defense attorneys that Boyd took a step toward the K-9 officer, prompting the use of lethal force. McGinn called it a "phantom step."
"You can see that Mr. Boyd never moves toward the officers," she said. "He never closes distance."
Both former officers are charged with second-degree murder, which carries a maximum sentence of 15 years in prison. Jurors must decide whether they were justified in shooting Boyd to protect the life of the K-9 officer or whether they violated their training when they decided to open fire.
"The way the society should handle the mentally ill should be addressed but not in this courtroom," Sandy's attorney Sam Bregman told jurors. "The way the Albuquerqu Police Department handled this situation in general also should be addressed but not in this courtroom."
He urged jurors to block out those larger issues and focus their deliberations on the actions of the two officers.
Perez and Sandy were among 18 officers charged in 2015 with murder or manslaughter stemming from on-duty shootings. Like the Boyd shooting, a majority of those cases were captured by police lapel or dashcam cameras, or bystander video.
Both sides in the New Mexico case said the most important evidence is the video taken by police and a nearby homeowner.
"Here's the thing about the evidence in the video: It cannot lie. It is what it is," McGinn told jurors. "Don't listen to the words, look at the video."
She added during her closing argument that "no one should be above the law."
Boyd was 38 and camping in the foothills when a resident reported his illegal campsite several hundred feet behind a neighborhood. Two officers responded with weapons drawn and called for help after they tried to pat down Boyd and he pulled knives.
Nearly 20 officers responded over the next several hours with rifles, handguns, hundreds of rounds of ammunition, and smoke bombs. During the standoff, Boyd shouted death threats at the officers from his perch on a hillside and expressed fears they would shoot him.
McGinn spent much of the trial underscoring the role she says Sandy played in making a series of flawed decisions that agitated Boyd — from interrupting negotiations between Boyd and an officer trained in crisis intervention to rushing a failed plan to take him into custody with less-lethal force.
Sandy responded to the standoff with Boyd because a sergeant had requested a Taser shotgun. He arrived at the same time as a State Police sergeant he knew. The sergeant's dashcam video recorded Sandy calling Boyd "a lunatic."
During the trial, he said for the first time publicly that he deeply regretted the remark.
Perez was among the last to arrive after his SWAT sergeant asked him to respond.
He drove to the campsite hearing other officers say over radio traffic that Boyd was threatening officers and that he also had a history of violence against police, including one instance in which he broke an officer's nose.
A few minutes after Perez arrived, he yelled for Sandy to detonate the flash-bang grenade, which went off near Boyd's feet but not close enough to startle him so officers could take him into custody. Perez and Sandy opened fire seconds later.
Copyright 2016 The Associated Press. All rights reserved. This material may not be published, broadcast, rewritten or redistributed.