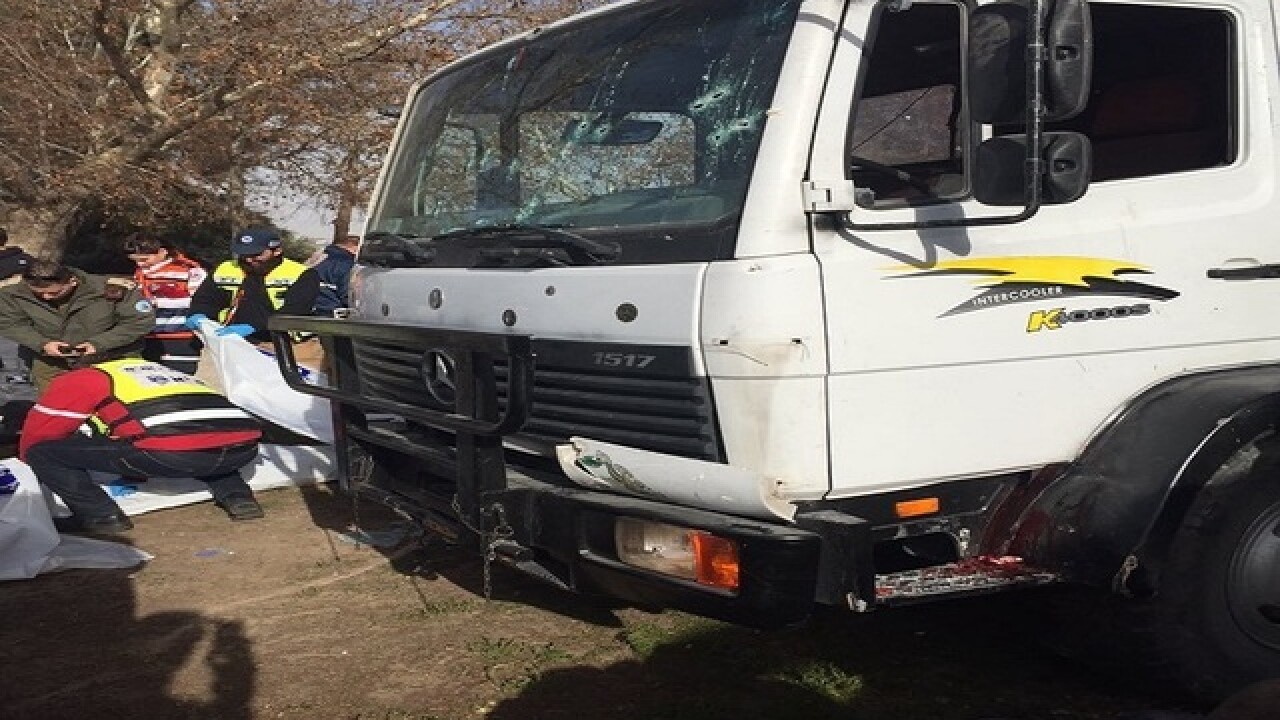 By: CNN
Posted at 3:52 PM, Jan 08, 2017
JERUSALEM (CNN) -- The driver who plowed a truck into a group of soldiers in Jerusalem, killing four people and injuring at least 10, may have been an ISIS sympathizer, according to Israeli Prime Minister Benjamin Netanyahu.
Three of the four killed were females. Israel Defense Forces (IDF) said three of the slain were cadets and one was an officer. All of the slain victims were in their 20s.
Israeli police shot and killed the attack suspect, who they identified as 28-year-old Fadi Qunbar. Police have also arrested nine other suspects, including five of Qunbar's family members.
Speaking from the scene of the attack, on a promenade overlooking the walled Old City of Jerusalem, Netanyahu said authorities have identified the terrorist and "all signs show he is a supporter of the Islamic State."
Earlier, Israel Police spokesman Micky Rosenfeld told CNN "there are no potential active ISIS cells here in Israel."
"A group had gotten off the bus and were getting organized with their bags when the terrorist took the opportunity, ramming his truck into the group," Rosenfeld said.
"Then he in fact reversed and tried to ram them again until shots were fired, and the terrorist was shot and killed at the scene."
The four soldiers killed in the Jerusalem truck attack Sunday have been identified by Israel Defense Forces. They are:
-- 2nd Lt. Yael Yekutiel, 20, of Givatayim
-- Cadet Shir Hajaj, 22, of Maale Adumim
-- Cadet Shira Tsur, 20, of Haifa
-- Cadet Erez Orbach, 20, of Alon Shvut
Several other officers and cadets were injured and evacuated to hospitals for medical treatment, IDF said.
Israel will now consider using administrative detention against suspected ISIS sympathizers and supporters, according to an official familiar with the decision.
In a statement, the US State Department condemned the "glorification of terrorism now or at any time" and said "there is absolutely no justification for these brutal and senseless attacks."
Netanyahu said police had sealed off Qunbar's predominately Arab neighborhood in East Jerusalem while they investigate.
"We know there is a sequence of terror attacks and it's quite possible that there is a connection between them, from France, Berlin and now Jerusalem," Netanyahu said.
In a statement, Jerusalem's mayor, Nir Barkat, said there was "no limit to the cruelty of the terrorists who use every means to murder Jews and damage the routine life in the capital of Israel."
While no group has yet to claim responsibility for the attack, Hamas, the militant fundamentalist Islamic organization, praised the attacker on Twitter.
"We bless the courageous and heroic truck operation in Jerusalem," the group tweeted. "It comes within the context of the normal response to the crimes of the Israeli occupation."
Hamas' goal is the creation of an Islamic fundamentalist Palestinian state and they insist that Israel is an occupying power and must be destroyed.
Diplomatic tensions have flared between the US and Israel in recent weeks after the Obama administration decided not to veto a UN Security Council resolution condemning Israel and its construction of new settlements in East Jerusalem.
CNN's Sarah Sirgany contributed to this report.
The-CNN-Wire
™ & © 2017 Cable News Network, Inc., a Time Warner Company. All rights reserved.
Copyright 2017 Scripps Media, Inc. All rights reserved. This material may not be published, broadcast, rewritten, or redistributed.