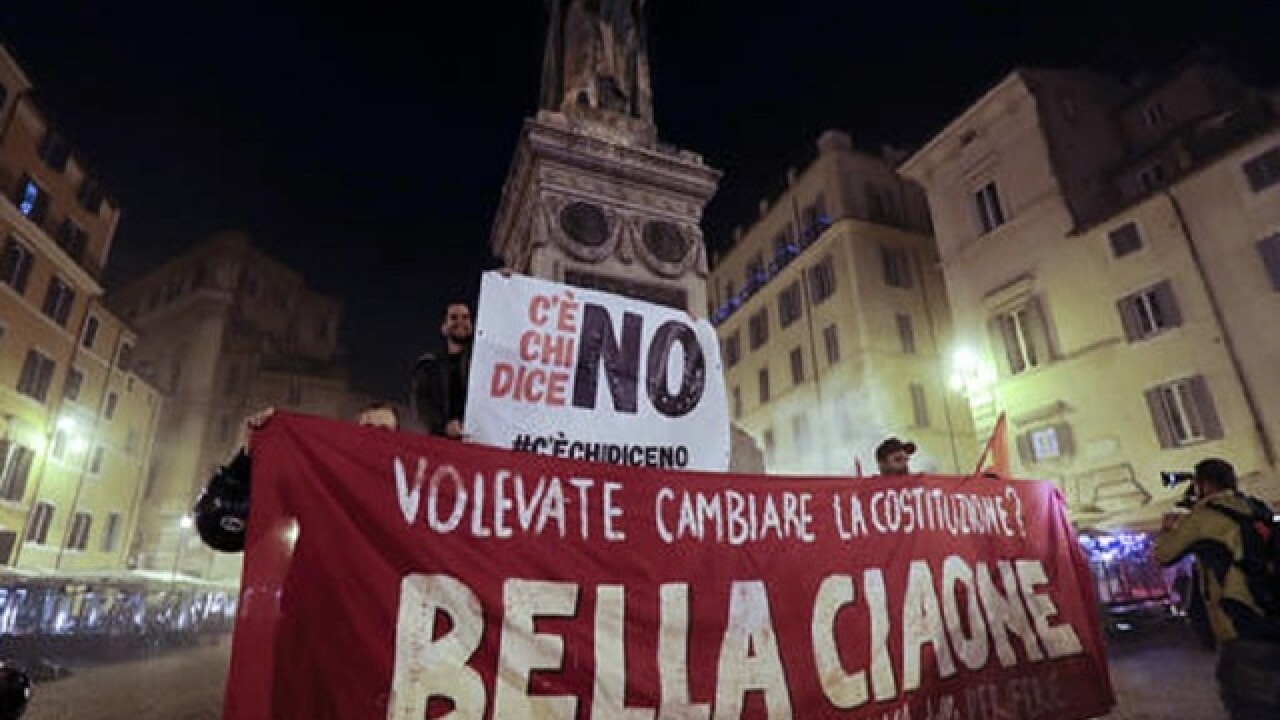 Gregorio Borgia
<p>Anti-referendum militants gather in downtown Rome after Italian Premier Matteo Renzi conceded defeat in a constitutional referendum and announced he will resign in Rome, early Monday, Dec. 5, 2016. Italians voted Sunday in a referendum on constitutional reforms that Premier Matteo Renzi has staked his political future on. Banner in Italian reads "You wanted to change the Constitution? Goodby Bella". (AP Photo/Gregorio Borgia)</p>

(CNN) -- Italian center-left Prime Minister Matteo Renzi said he will resign on Monday, after conceding an "extraordinary clear" defeat in an Italian constitutional referendum.
"Tomorrow the President of the Republic will have a meeting with me and I will hand in my resignation," Renzi said. "I take on full responsibilities for defeat and so I say I lost, not you," he told supporters.
The defeat of the referendum was resounding, with nearly 60% of voters saying "no."
It is considered a win for eurosceptic populist and nationalist parties in Italy which campaigned heavily against Renzi and his promise to stimulate Italy's sluggish economy.
The No campaign was spearheaded by the anti-establishment Five Star Movement party, led by Beppe Grillo, which is expected to make substantial gains if a general election is called.
"When you lose you cannot pretend that nothing has happened and go to bed and sleep. My government ends here today," Renzi said.
More than just the constitution
Formally, the vote was a referendum on whether or not the country should amend its 1948 constitution.
Renzi's intention was to reduce the power of the upper house of the Italian Parliament, the Senato, by cutting its numbers from 315 to 100 -- making it more of a consultative assembly.
Proponents of the referendum said that the goal was to make the job of governing Italy less complicated and reforms would help revive the nation's lethargic economy.
However, the referendum was widely thought to act as a litmus test for the rising wave of populism spreading in Europe, and the chance to register discontent with the current government.
What happens now?
Italy's President will decide what to do next.
He could piece together a government out of the current Parliament or call for a general election in which the Five Star Movement party is expected to make great gains.
Formed by Grillo, an entertainer-turned-politican known for his unruly language and mop of silver hair, the party campaigned heavily for a "no" vote on constitutional reforms.
Grillo made a name for himself on Italian TV in the 1970s and 1980s and capitalized on his show-business bravado to promote an anti-establishment movement spanning both the left and right of politics.
Foreign observers fear that if Grillo comes to power in an early election, he'll call a referendum to scrap the euro, go back to the Italian lira, and perhaps even follow Britain out of the European Union.
"They have long promised to hold a referendum on Italy's membership of the single currency," said Vincenzo Scarpetta, senior policy analyst at think tank Open Europe.
France's National Front party leader and fellow eurosceptic Marine Le Pen took to Twitter on hearing the result.
"The Italians have rejected the EU and Renzi. We must listen to this thirst for the freedom of nations and for protection!" she said.
What does it mean for the banks?
There are fears the results of the vote could further shake up the country's financial stability, considering that its banks are already downing in bad debt.
Investors, fearful of the political turmoil, could demand a much higher price for providing the money some banks urgently need.
A few banks might then be unable to pay that price or find willing backers, leaving them in need of a state bailout.
CNN's Sheena McKenzie, Azadeh Ansari , Alexander Felton, Nic Robertson, Nina Dos Santos and Marilia Brocchetto contributed to this report.
The-CNN-Wire
™ & © 2016 Cable News Network, Inc., a Time Warner Company. All rights reserved.
KTNV