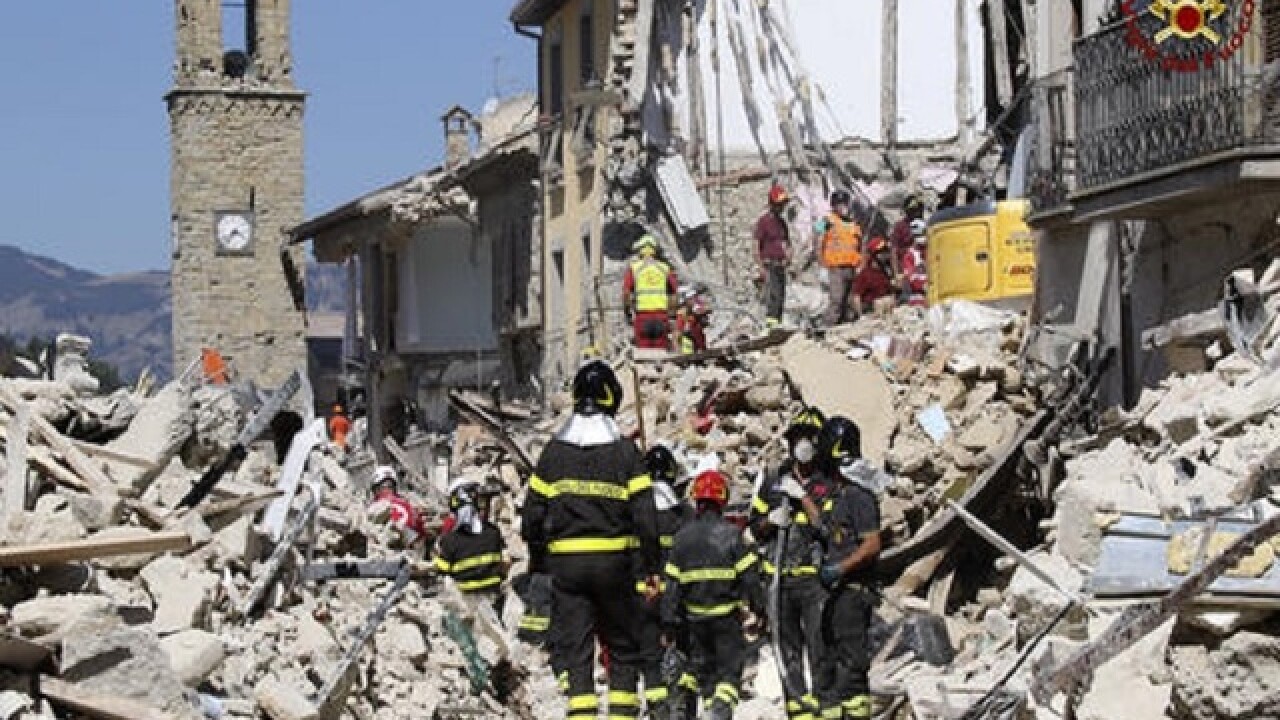 AMATRICE, Italy (AP) — Strong aftershocks rattled central Italy and shut down a key route into the hard-hit town of Amatrice on Friday as hopes dimmed that firefighters would find any more survivors from the earthquake that killed at least 291 people.

Damage from two roads has threatened to isolate the town.

The Italian government declared Saturday a day of national mourning and scheduled a state funeral to be attended by President Sergio Mattarella.

Some crumbled buildings in Amatrice cracked even further after the biggest aftershock of the morning struck at 6:28 a.m. The U.S. Geological Service said it had a magnitude of 4.7, while the Italian geophysics institute measured it at 4.8.

The shaking ground also damaged a key access bridge to Amatrice, forcing emergency crews to close it and making an already challenging traffic flow into the town worse. Civil protection officials were working to find alternate routes, since the bridge is crucial for emergency crews moving in and out of town.

The aftershock was preceded by more than 50 overnight and was followed by another nine in the next hour — part of the nearly 1,000 aftershocks that have rocked Italy's central Apennine Mountains since the original 6.2-magnitude quake early Wednesday.

Rescue efforts continued through the night and into Friday, but more than a day and a half had passed since the last person was extracted alive from the rubble. While Renzi hailed the fact that 215 people had been rescued after the quake, authorities reported a steadily rising death toll that had hit 267 by Friday morning.

Civil protection operations chief Immacolata Postiglione still insisted Friday that the rescue effort hadn't yet switched to a recovery mission. Rescue workers have noted that a person was pulled out alive 72 hours (three days) after the 2009 earthquake in the Italian town of L'Aquila.

"I confirm, once again as we have from the start, that the units that are doing the searches and rescues, including with dogs looking for other people trapped in the rubble, are absolutely fully active," she said Friday.

On the ground, authorities were still struggling to account for all the missing, since that number is still uncertain given the large number of visitors for summer holidays and an annual food festival.

"There is still hope to find survivors under the rubble, even in these hours," Walter Milan, a mountain rescue worker, said Friday. But he conceded: "Certainly, it will be very unlikely."

The vast majority of the dead were found in Amatrice, the medieval hilltop town famous for its bacon and tomato pasta sauce that was leveled by the quake. The other dead hailed from nearby Accumoli and Arcquarta del Tronto.

Flags will fly at half-staff Saturday on all public offices and a state funeral will be celebrated by a bishop in a gym in Ascoli Piceno for the victims of nearby Arquata del Tronto — to date, 49 of the dead have come from the tiny town and its hamlet Pescara del Tronto.

Across the area, thousands have been forced to abandon their homes, either because they were destroyed or they were determined to be too unsafe. Overnight some 2,100 slept in tent camps, nearly 1,000 more than the first night after Wednesday's quake, in a sign that a significant number had found nowhere else to go.

"I have no idea what I'm going to do now, because I had renovated the house two years ago," survivor Umberto Palaferri said, showing a photo of his collapsed home on his phone. "It was all new and now I don't know what to do. I'm 76 and don't know if I can rebuild it."