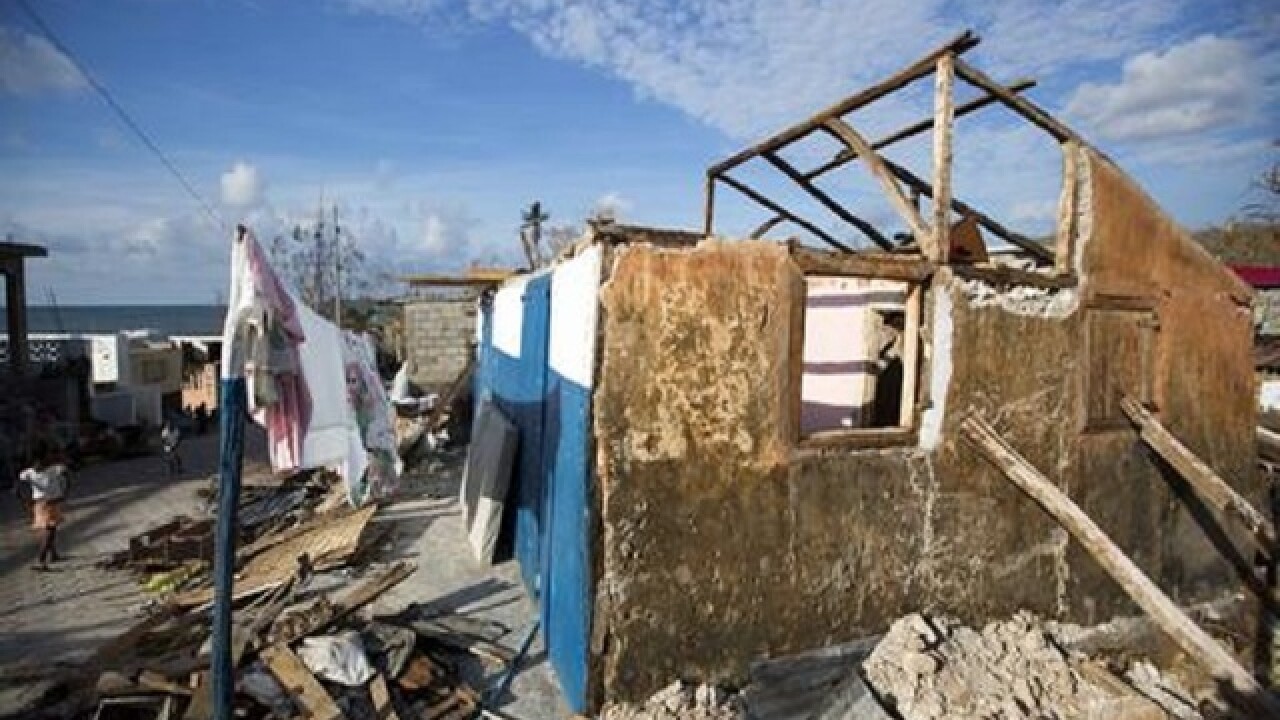 By: Associated Press
Posted at 11:08 PM, Oct 11, 2016
LES CAYES, Haiti (AP) — Food, water and building supplies began to reach remote corners of Haiti on Wednesday as tens of thousands of people slowly rebuilt their lives after a devastating Category 4 storm hit last week.
In the southern seaside community of Les Cayes, a U.N. truck delivered water to the Sous Roche neighborhood while residents including 49-year-old fisherman Justin Cambry stood in line. The delivery marked the first time the neighborhood had received any help since Hurricane Matthew hit on Oct. 4.
"Life is completely destroyed here," Cambry said. "It will take 20 years to get it all back."
Haitians helped each other regain some semblance of their pre-hurricane lives as they awaited the arrival of more aid.
A community group that formed in the southern coastal village of Les Anglais cleared tree limbs from streets and placed them into piles while others gathered scraps of wood to start rebuilding homes.
Meanwhile, more than a dozen people gathered inside a neighbor's general store in the western coastal town of Anse-d'Hainault that was serving as a makeshift shelter. The store had a small generator that provided a little light and power to charge phones.
"We're looking out for each other," said Walna Gevere, who traveled to her hometown from the capital of Port-au-Prince to be with her family.
Those who survived the storm have faced great challenges, including going days without food. The prices of bottled water, bleach and other vital items have jumped by as much as 25 percent amid worsening shortages.
Elancie Moise, an agronomist and director for the Department of Agriculture in southern Haiti, said between 80 and 100 percent of crops have been lost across the southern peninsula.
"Crisis is not the word to describe it," he said. "You need a stronger word. It is much worse. There is no food for people to eat."
In addition, there have been reports of assaults on women gathered in shelters, said Yolette Etienne, director for the U.K.-based group ActionAid in Haiti.
She traveled to the department of Grand-Anse in Haiti's southwest peninsula to assess the damage when she was told about the assaults.
"Fortunately, the women organized themselves to capture the men and call the police," she said, adding that shelters are taking more preventive measures.
The United Nations has called for $120 million in aid, noting that about 750,000 people in southwest Haiti alone will need "life-saving assistance and protection" in the next three months. Overall, at least 1.4 million people need assistance, the U.N. said.
Meanwhile, U.S. Homeland Security Secretary Jeh Johnson says the storm's impact has put on hold a new policy of deporting Haitians in the United States without permission, but the government intends to resume it in the future. He said U.S. officials will have to "be sympathetic to the plight of the people of Haiti as a result." But after conditions change, "we intend to resume the policy."
The National Civil Protection headquarters in Port-au-Prince raised the official nationwide death toll to 473, which included at least 244 deaths in Grand-Anse. But local officials have said the toll in Grand-Anse alone tops 500.
Concern also was growing about an increase in cases of cholera, which has already killed roughly 10,000 people and sickened more than 800,000 since 2010.
The World Health Organization pledged to send 1 million doses of cholera vaccine to Haiti, where water and sanitation infrastructure has been severely damaged. Sandra Honore, the U.N. envoy for Haiti, said the health impact of Hurricane Matthew "cannot be overestimated."
Cholera cases were rising in towns such as Anse-d'Hainault, where 2-year-old Dabens Desrosiers received rehydration fluid from an IV.
"Daddy, take me home," he repeatedly murmured to his father, 31-year-old Gerson Desrosiers.
After three days of treatment, the boy was about to be discharged, but there was no home to return as the family's wooden shack was flattened by Hurricane Matthew.
Copyright 2016 The Associated Press. All rights reserved. This material may not be published, broadcast, rewritten or redistributed.