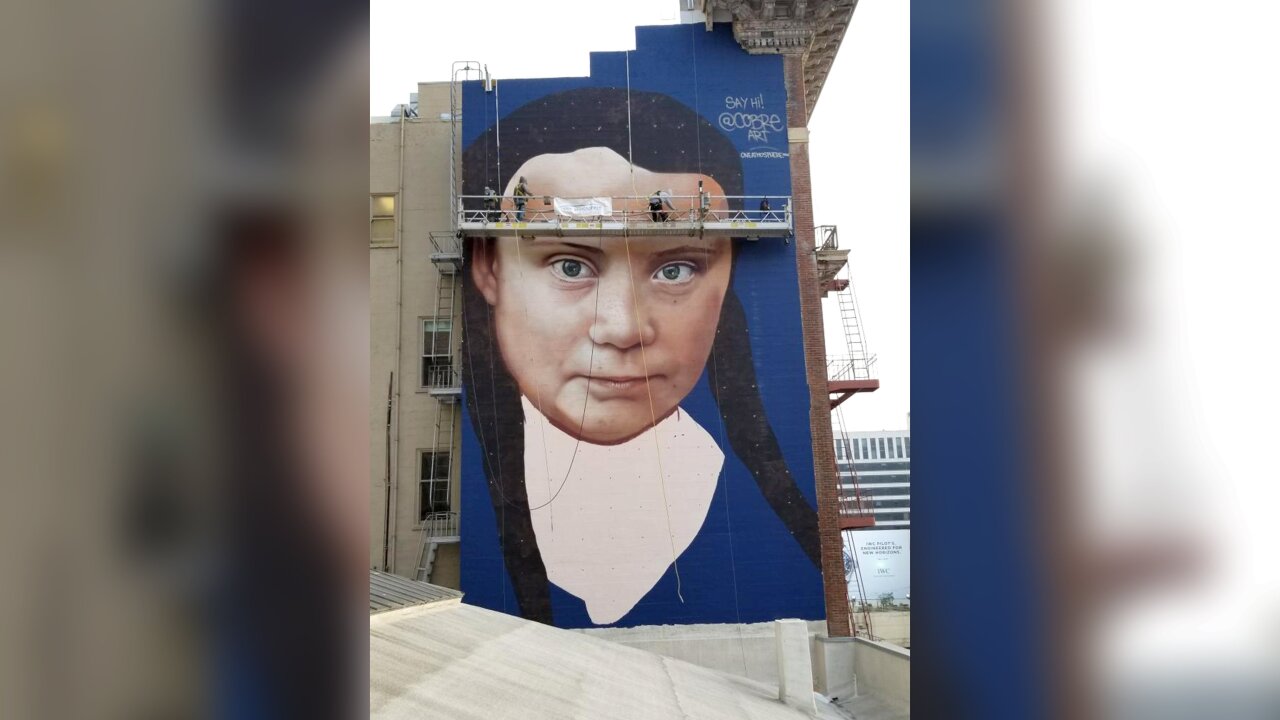 The Bay Area has many murals, with images of everyone from Robin Williams to Nipsey Hussle gracing its buildings.

Now, there's a new name to add to that list: Greta Thunberg.

A mural of the Swedish teenage climate activist, whose movement has caught the attention of the world, is set to be completed next Tuesday.

Located in downtown San Francisco near Union Square (420 Mason St., for all you locals), the mural features Thunberg from the chest up — gazing straight into our souls, lips pursed.

It's enough to make anyone stop and consider their environmental impact.

And that's kind of the point, said Paul Scott, executive director of OneAtmosphere.org — the nonprofit that's funding the project.

The organization wanted to focus on art celebrating climate activists, Scott told CNN. When brainstorming people to feature, Thunberg was the first person that came to mind.

"If we can amplify her message and get more people involved and listening to what she's saying, then we're doing some good," he said.

The overall feedback has been incredibly positive, he said. But the most critical reactions have been from those who haven't recognized her.

"They're struck by the image and want to learn more," he said. "If they take the time to learn more about what she's trying to share, that I think has an impact on most people. Makes them want to help."

Andrés Petreselli is the artist behind the mural. He also did the city's Robin Williams one, which is how Scott found his work.

Petreselli is donating his time to the cause and told CNN he feels connected to everything Thunberg is doing. She sets examples for the whole world, he said.

"We're pretty much at the beginning of our extinction, so if we don't do anything right now, it's going to be too late," he said.

It's not the first mural to the young activist

Thunberg and her message have inspired murals around the world. One in Bristol, England, featuring the activist partly underwater went up earlier this year, along with another one in Canada.

Not everyone has been eager to hear her message. The mural in Canada, painted on a "free wall" along a bike path, was defaced twice shortly after it was first created, according to CNN affiliate CBC.

The adversity hasn't stopped Thunberg, though.

She is best known for her climate strikes, which she began in 2018 outside the Swedish Parliament. Her protest inspired thousands of students around the world to walk out of class and demand action on the climate crisis.

She hasn't slowed down. She's spoken to everyone from the United Nations to the US Congress -- and even former President Barack Obama -- about the climate crisis.

"As it is now, people in general don't seem to be very aware of the actual science and how serious this crisis is," she said in September during a congressional hearing. "I think we need to inform them and start treating the crisis like the existential threat it is."