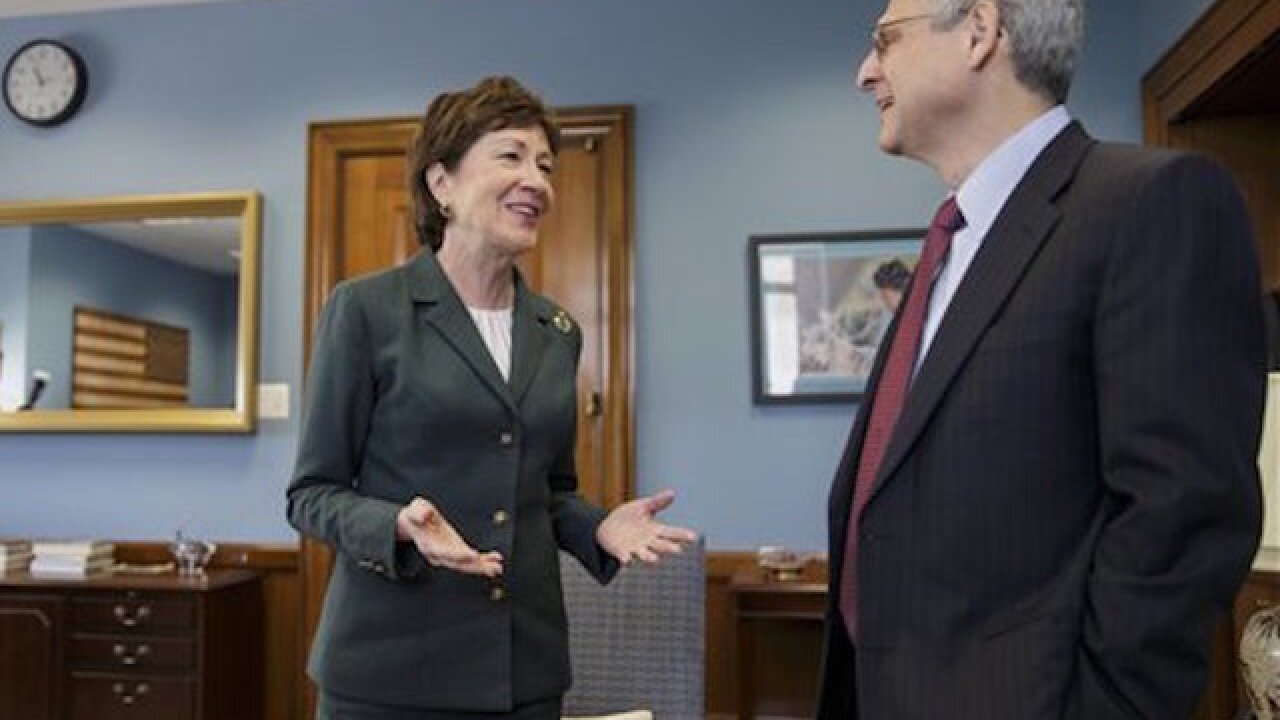 WASHINGTON (AP) — A Republican senator said Tuesday she is "more convinced than ever" that there should be hearings on President Barack Obama's Supreme Court nominee after meeting with Judge Merrick Garland.

But Senate Majority Leader Mitch McConnell, R-Ky., made clear he is not budging, telling reporters, "I think it's safe to say there will not be hearings or votes."

Maine Sen. Susan Collins sat down with Garland on Capitol Hill for more than an hour. She is one of two GOP senators who called for hearings on Garland's nomination.

"He has a humility about him," Collins said immediately after the meeting. "He has clearly thought very deeply about the issues confronting the courts, there was not any question he could not handle and he has a long record of accomplishment."

Collins acknowledged that she is unlikely to change anyone's mind on the issue. McConnell and Senate Judiciary Committee Chairman Charles Grassley of Iowa have held firm that they will block Garland and let the next president decide, a move that conservative activists have cheered. Those two GOP leaders have the backing of 50 other GOP senators this election year.

Not long after Collins made her comments, McConnell said that Democrats' attempts to pressure Republicans on the issue during the Senate's just-completed spring recess had failed.

Conservative activists immediately targeted Collins. One group, FreedomWorks, said Collins was caving to the White House and wasn't to be trusted. The group said its grassroots supporters sent 1.44 million messages to Senate Republicans Tuesday, including almost 50,000 to Collins.

Democratic senators took turns Tuesday railing against the GOP stance, accusing Republicans of failing to complete their constitutional duties because of pressure from conservative groups and the billionaire donor Koch brothers. Senate Minority Leader Harry Reid suggested Democrats might attempt procedural maneuvers to try to force a vote on the nominee, a strategy that would be unlikely to succeed.

"Certainly we've got that in our arrow quiver to do that and other things if we choose," Reid said.

Another member of the Senate Democratic leadership, Patty Murray of Washington, acknowledged the success of the conservative activists: "Sadly so far it seems to be working. Republicans who started to listen to their constituents are backing away and other Republicans are seeing what happens to anyone who even talks about doing their job."

Another Republican who met with Garland Tuesday, Arkansas Sen. John Boozman, said he used the meeting to reiterate McConnell's position.

"I really wanted to convey in person my position that the next president should be the person that fills the vacancy," Boozman said in an interview with The Associated Press after the meeting. "That's what we talked about and the fact that my position is firm, I'm not supporting going forward with hearings or a vote or anything of that nature."

Garland later met with West Virginia Sen. Joe Manchin, a moderate Democrat. Talking to reporters while Garland sat next to him in his office, Manchin said he didn't understand why Republicans wouldn't at least want to meet with the nominee.

"I appreciate that," Garland said, making a rare comment.

Garland has several more meetings this week, all with Democrats. But the White House said he'd meet with more Republicans next week, including Sen. Kelly Ayotte of New Hampshire, Sen. Rob Portman of Ohio, Sen. Lisa Murkowski of Alaska and Sen. Jeff Flake of Arizona.

In all, close to 20 GOP senators have said they are willing to meet Garland, though most, like Boozman, oppose letting the confirmation process progress. Collins and Sen. Mark Kirk of Illinois are the only two who have called for hearings. Kansas Sen. Jerry Moran had also said he thought there should be hearings, but reversed that position after conservative backlash.

Grassley's office said Monday that he invited the judge to breakfast, but also reiterated that the senator would not change his mind on the issue. Collins noted that the Iowa senator had at least extended that courtesy.

"Let's see if after that meeting Sen. Grassley still holds to the position that there should not be hearings," she said.

Collins said Garland is well-informed and thoughtful and that her colleagues would be impressed with him. She has spoken out at caucus meetings to try to convince others to have meetings and support hearings.

"It would be ironic if the next president happens to be a Democrat, and chooses someone who is far to Judge Garland's left," she said.