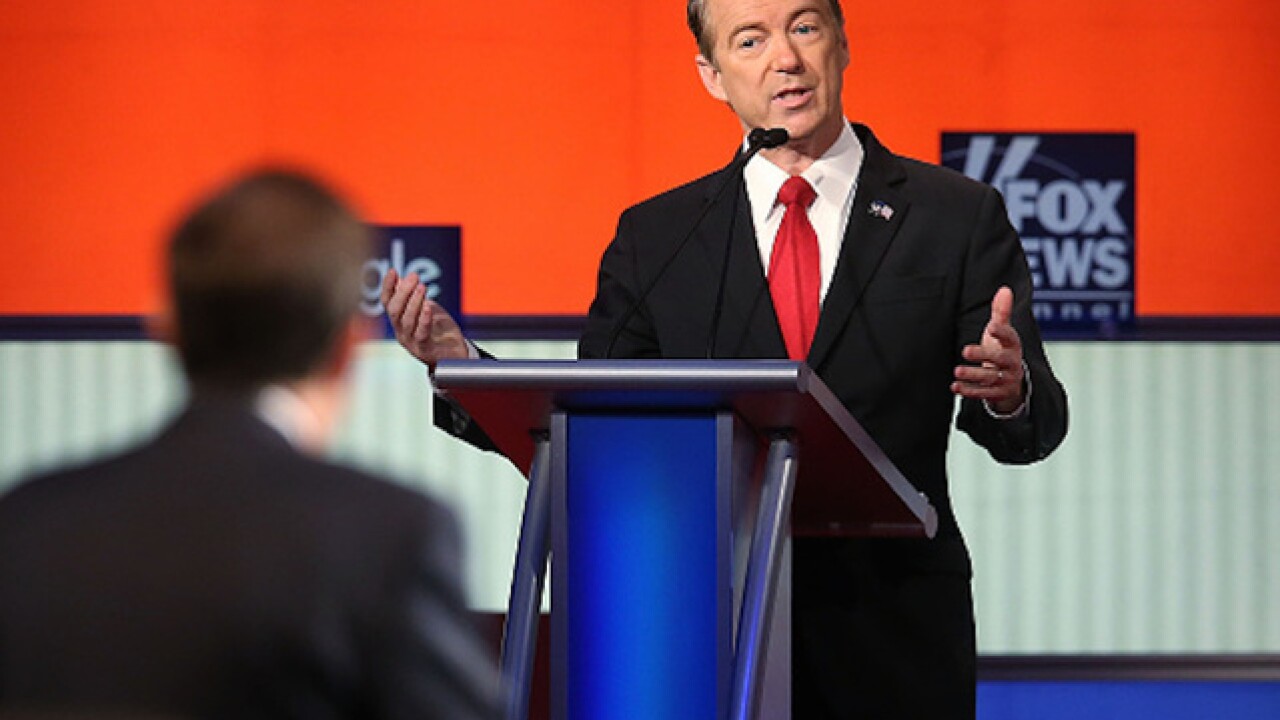 Copyright Getty Images
Scott Olson
<p>DES MOINES, IA - JANUARY 28: Republican presidential candidate Sen. Rand Paul (R-KY) participates in the Fox News - Google GOP Debate January 28, 2016 at the Iowa Events Center in Des Moines, Iowa. Residents of Iowa will vote for the Republican nominee at the caucuses on February 1. Donald Trump, who is leading most polls in the state, decided not to participate in the debate. (Photo by Scott Olson/Getty Images)</p>

Republican Sen. Rand Paul and Rep. Mark Sanford have joined forces on dismantling Obamacare and will introduce a bill Wednesday that would lift restrictions on insurers and give Americans more tax breaks for buying and using health care.

CNN obtained a summary of the legislation Tuesday afternoon.

The bill is likely to garner broad support among Sanford's colleagues in the conservative House Freedom Caucus and puts considerable pressure on party leaders to move quickly on overhauling Obamacare, as they have yet to unveil a blueprint for an alternative. The Sanford-Paul legislation is intended to send a clear signal that there is no excuse for delaying a vote to roll back the health care law.

Sanford told CNN in an interview to preview the bill that it is simply not tenable for Republicans to repeal Obamacare without a replacement plan.

"I tell my boys all the time: It's not good to enough to say what you're against. Tell me what you're for," Sanford said. "It's not enough for us as Republicans to say we are against Obamacare. I think everybody's got that. The real cause for anxiety is people who (are) concerned about what comes next."

Pointing to the pro-Obamacare protestors and constituents who have targeted Republican lawmakers' town halls in recent weeks, Sanford said the GOP has reached an "inflection point."

"Our simple message is we don't want to have 'Obamacare light.' That would be a mistake," the South Carolina congressman said. "We've all seen the crowds in different town hall meetings. We've all gotten the emails and phone calls, and there will be a real temptation to do that based on political forces and based on political fear."

Sanford and fellow members on the Freedom Caucus have grown increasingly vocal in requesting that GOP leaders move swiftly to repeal Obamacare.

On Monday night, the group voted to urge leadership to bring to the House floor an Obamacare repeal bill that Republicans approved in 2015. That legislation called for repealing the law's taxes immediately while giving Congress two years to come up with a replacement plan. At that time, the Obamacare mandates would end funding for subsidies, and Medicaid expansion would be eliminated. (Sanford said he would oppose any Obamacare repeal bill that is less aggressive than what Republicans sent to President Barack Obama's desk in 2015).

The Sanford-Paul legislation is designed to work in conjunction with the repeal reconciliation bill and contains many popular Republican health care provisions.

The measure would allow insurers to sell a wider array of policies, including those with more limited benefits and lower premiums. It would let Americans sock away $5,000 in health savings accounts (HSA) tax free, up from $3,400 this year, while also enabling those who buy their own coverage to deduct the premiums from their incomes. It would protect those with pre-existing conditions as long as they had continuous coverage.

The bill would also allow people and small business owners to band together through professional associations to purchase insurance, with the goal of decreasing the cost through greater numbers. And it would permit insurers to sell policies across state lines.

The legislation also proposes restricting the use of taxpayer funds for abortion by banning people from using HSA funds for elective abortions.

One of the biggest obstacles for Sanford and Paul will be garnering bipartisan support for their bill in the Senate, where 60 votes will be required to approve Obamacare replacement measures.

"I'm going to focus on the House and Rand will focus on the Senate," Sanford said. "We'll take one step at a time."

Despite the mounting pressure from colleagues, House GOP leaders insisted Tuesday that they were taking a measured approach to overhauling Obamacare.

House Speaker Paul Ryan said at a press conference that leaders are taking a "step-by-step" strategy on repeal and replace.

"We want to get it right, and we've been taking our time to do that," said Republican Rep. Greg Walden, the chairman of the House Energy and Commerce Committee. "You're going to see us come forward with a replacement bill after we repeal that makes sure that people have access to affordable care health for the first time."