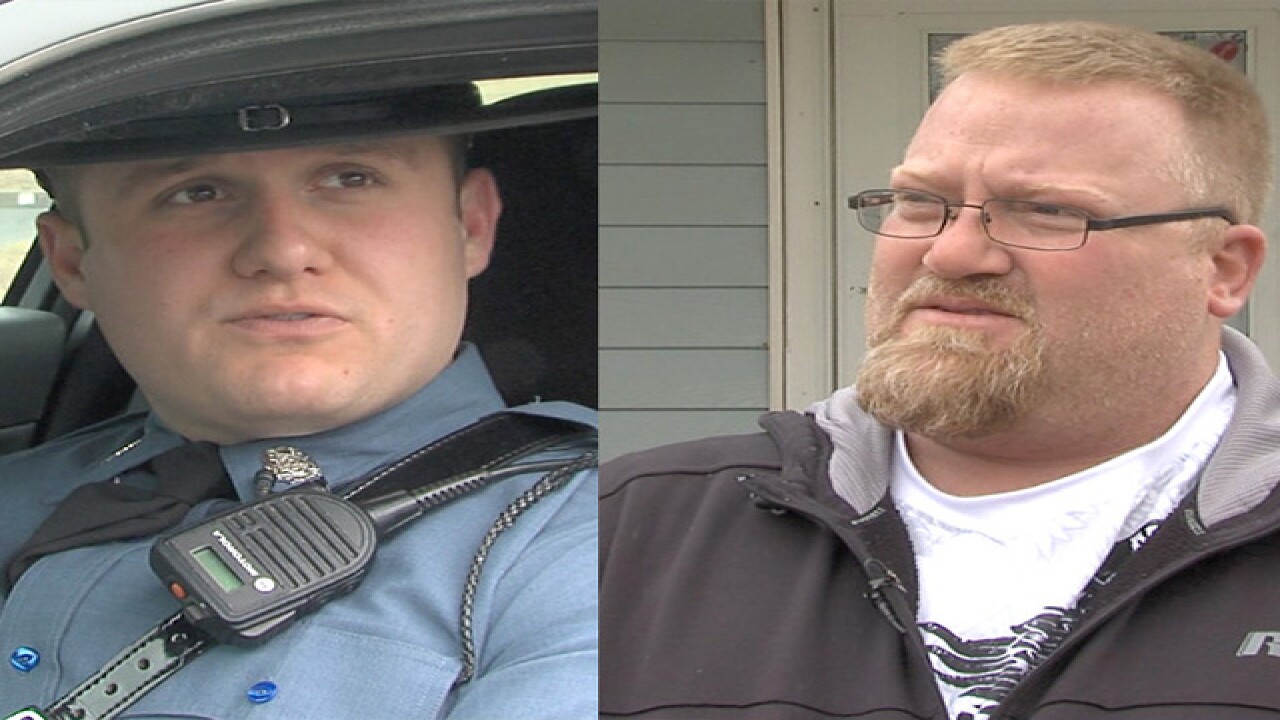 Copyright 2017 Scripps Media, Inc. All rights reserved. This material may not be published, broadcast, rewritten, or redistributed.
<p>Missouri State Trooper Beau Ryun got help from good Samaritans who helped him during a traffic stop. </p>

Missouri State Trooper Beau Ryun never thought he would get backup assistance from a random stranger, but he’s certainly thankful for those who stepped in to help during a dangerous arrest Tuesday afternoon.

"We were rolling around on the ground and it was a fight for control,” said Ryun. "The reception in that area was very poor for my radio, and I was unable to call for help."

Ryun pulled over a car for a lane violation shortly after 11 a.m. on I-70 East near the Highway 13 exit for Higginsville.

"I observed he was overly nervous, and I smelled the odor of marijuana emitting from the vehicle,” said Ryun.

Before the two walked to Ryun’s patrol car, Ryun checked for concealed weapons and found a pair of scissors tucked under Timmons’s waistband. Timmons then agreed to sit in the front seat of Ryun’s patrol car while Ryun searched for drugs and weapons. It was moments later Timmons allegedly lunged at Ryun.

"As soon as I took the handcuffs out of my holster is when the fight started,” said Ryun.

The trooper said Timmons’s attack led to both of them being on the ground on the side of the interstate directly behind the patrol car. Ryun tried calling for backup during the struggle that lasted several minutes. However, his calls weren’t getting through due to the struggle and the poor reception in the area. And while several 911 calls came flooding in, the nearest squad car was several miles away in Odessa.

"I backed up and I got out and I just didn't even think, just took off straight towards him,” said Charles Barney of Odessa.

Barney was on his way to a funeral when he drove by the highway-side scuffle. He and a 74-year-old woman - only known as ‘Sandra’ - who just pulled over as well both got out of their cars to help.

The 38-year-old said he found Ryun’s handcuffs on the ground and was able to get one of Timmons’s wrists in cuffs. However, it was at that moment Barney said Timmons fought back even harder, even injuring the 74-year-old who was stepping in to help.

41 Action News was denied dashcam footage of the fight because of the current investigation. Barney did his best to describe in his own words what happened next.

"So I locked his legs in with my legs and I grabbed his other arm and bent it up all the way over his head and told him, 'You need to stop or I'm gonna break it,’” said Barney.

Ryun, who was nearly collapsing from exhaustion, was thrilled to see both random strangers stepping in to save the day.

"That was one of the best moments of my life,” said Ryun. "I couldn't call for help because my radio was disabled, so to see Charles and Sandra step up like that, I’ll remember that for the rest of my life."

Timmons is facing six separate charges from Lafayette County, including felony assault and possession of marijuana.

Ryun said he will be submitting Barney’s and Sandra’s names to his captain for honorary trooper awards.

Josh Helmuth can be reached at josh.helmuth@kshb.com