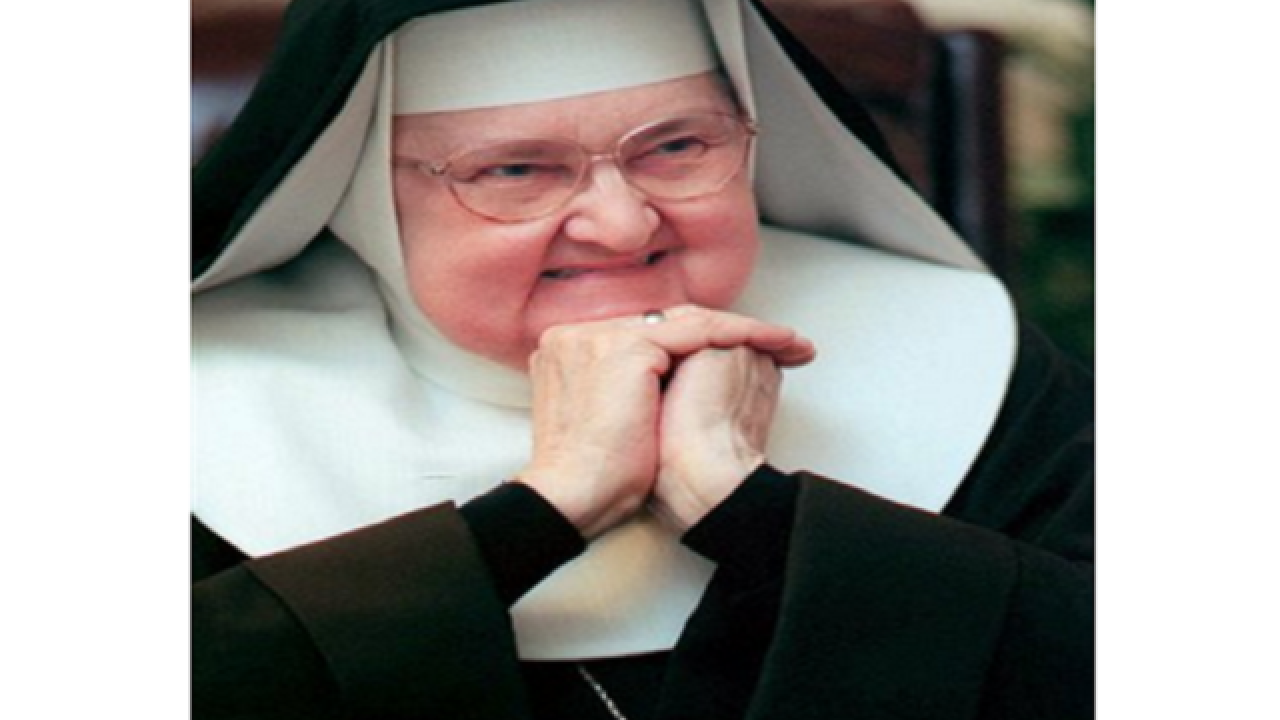 By: Associated Press
Posted at 9:31 PM, Mar 27, 2016
HANCEVILLE, Alabama (AP) — Mother Mary Angelica, a folksy Roman Catholic nun who used a monastery garage to begin a television ministry that grew into a global religious media empire, has died. She was 92.
Known to millions of viewers simply as "Mother Angelica," the founder of the Eternal Word Television Network died Easter Sunday at the rural monastery where she lived about 45 miles north of Birmingham, according to EWTN Chairman and Chief Executive Officer Michael P. Warsaw.
"Mother has always, and will always, personify EWTN, the Network which she founded. In the face of sickness and long-suffering trials, Mother's example of joy and prayerful perseverance exemplified the Franciscan spirit she held so dear. We thank God for Mother Angelica and for the gift of her extraordinary life," Warsaw said in a news release late Sunday.
Mother Angelica had been in declining health since suffering a severe cerebral hemorrhage on Christmas Eve 2001. She never regained her full speaking ability and had other, less-severe strokes through the years.
Bedridden for months, Mother Angelica was placed on a feeding tube this fall as her health slowly declined, fellow nuns at Our Lady of the Angels Monastery said in an announcement released in November.
Alabama Gov. Robert Bentley said in a statement Sunday that Mother Angelica will live on forever in the hearts of those touched by her sermons.
"On this Easter Sunday, it is only fitting that the Lord chose today to call home one of his humble servants, Mother Angelica. She devoted her life to ministry, converting untold numbers of people to the church. She left an indelible mark on Alabama, the Catholic Church and the world as a whole," Bentley said.
Although she had been out of the public eye for years and was no longer appearing on her trademark "Mother Angelica Live" show, old episodes of her show have remained a programming staple on Eternal Word.
"We want you to know how much God loves you, and that's a lot," she told viewers at the end of an episode taped in November 2000.
Mother Angelica displayed both deep devotion to Jesus and a comic's timing on the episode, drawing laughs when she couldn't reach her Bible during the opening sequence. An unseen aide hands her the book from off camera.
"That's when you appreciate long arms," Mother Angelica deadpanned.
Mother Angelica was born Rita Rizzo in Canton, Ohio, in 1923. She entered the Poor Clares of Perpetual Adoration monastery in Cleveland at age 21 and joined other nuns in moving South to open a new monastery in Alabama in 1962.
With only $200, the nun began broadcasting a religious talk show from a TV studio put together in the monastery garage in suburban Birmingham in 1981. That show grew into Eternal Word Television Network, which has long had the blessing of the Vatican.
While critics sometimes accuse Eternal Word Television Network of being too conservative or too liberal, it says it tries to stick to the leadership of the Vatican. The network reports extensively on statements and trips by the pope.
Despite its humble beginnings, EWTN Global Catholic Network calls itself the world's largest religious media network. It has 11 TV networks that broadcast Catholic programming to more than 258 million households in more than 145 counties and territories.
Eternal Word's radio operation includes a global shortwave broadcast; satellite and Internet radio channels; and more than 300 Catholic radio affiliates in the United States. Its print services include The National Catholic Register newspaper, the Catholic News Agency and EWTN Publishing Inc.
The nonprofit broadcaster reported total revenues of $46 million in 2013, the last year for which tax records are available. Of that, $45.4 million came from donations.
An associated catalog division reported revenues of $2.7 million in 2013, mostly from sales, records show.
A Mass of Christian Burial will be celebrated at 11:00 a.m. Friday at the Shrine of the Most Blessed Sacrament in Hanceville. Interment will immediately follow in the Shrine's Crypt Church.
Associated Press 2016