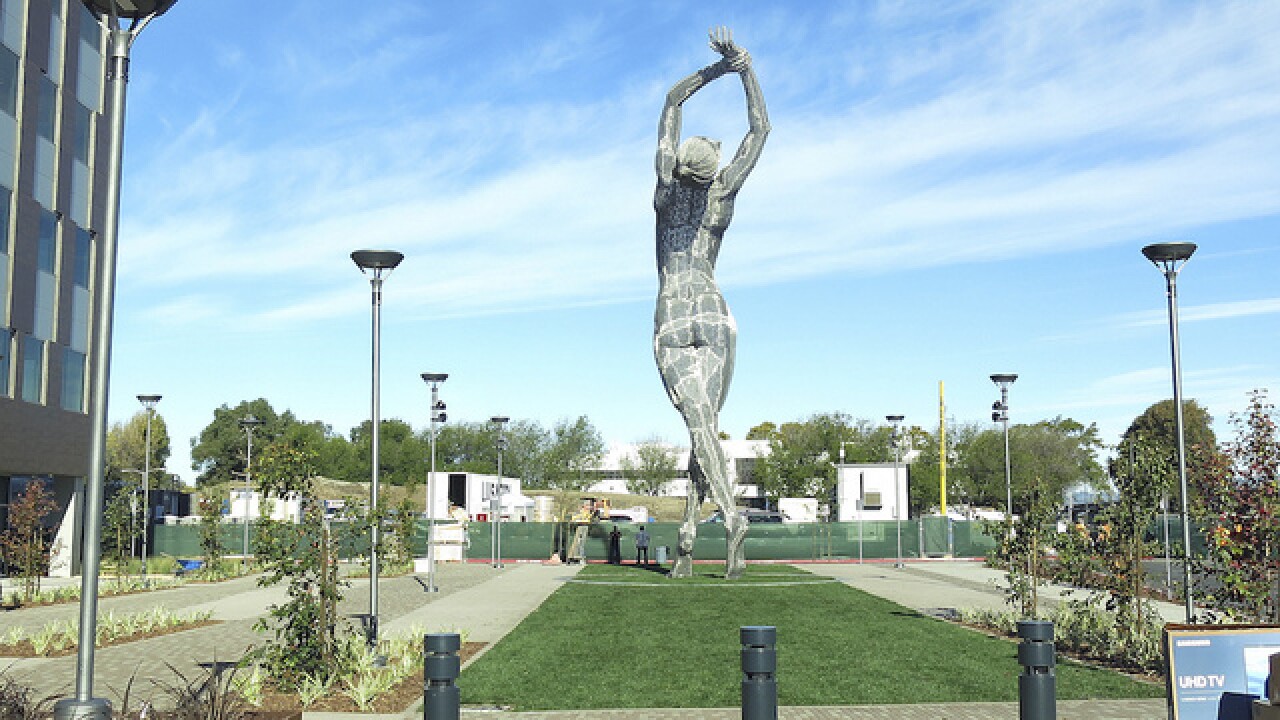 Jocelyn Gecker
<p>In this photo taken Wednesday Oct. 19, 2016, a 55-foot nude statue stands in San Leandro, Calif. The statue of a naked woman is stirring controversy and a lot of conversation.</p>

SAN LEANDRO, Calif. (AP) — There have long been complaints about the lack of women in the tech industry. Now there's a towering female figure, in a tech park across the bay from San Francisco, although not quite what some people had in mind.

A 55-foot tall statue of a nude woman unveiled this week in the working-class community of San Leandro is stirring controversy and a lot of conversation.

At the base of the 13,000-pound statue is a message in 10 languages that says: "What would the world be like if women were safe?"

The statue — roughly three times as tall as Michelangelo's David — is made of steel mesh in the form of a graceful dancer, with an arched back and arms stretched overhead. The debate is not over its artistic merit but whether it's appropriate in public.

"If she's a ballerina, she should have some clothes on," said Tonette Watts, 57, a resident and mother of a teen girl, who stopped and stared at the statue on her way to work. "If you've got kids you do not want them seeing that."

Another parent, Keith Verville, 48, studied the sculpture and then asked: "Why is it so big? And SO not clothed?"

The statue, called "Truth is Beauty," is on private property at the edge of a new tech office complex — in a highly trafficked and visible area just across from San Leandro's commuter rail station.

Many people, including city officials, have welcomed the statue as a reflection of the changing demographics in San Leandro, where young millennials now outnumber older residents.

"This is something I'd never have thought would come to San Leandro," said Mayor Pauline Russo Cutter. "It's edgy and modern, and it makes me proud."

The statue debuted in 2013 at Burning Man, the annual counterculture celebration in the Nevada desert. It was then bought by developers of the complex, for a price they haven't disclosed, under a requirement by the city to include public art at the site.

Cutter said some city officials initially weren't thrilled by the choice but ultimately liked the idea of starting a conversation about art. The mayor says the statue sends a powerful message of female strength that's more apparent when seen up close.

The sculptor, Marco Cochrane, says he was marked as a child by the rape of a neighborhood friend and tries through art to bring attention to sexual assault and to the fear of many women, but also to the strength women feel when not afraid.

"She feels safe and she is loving herself in that moment, and hopefully people can feel that feeling," Cochrane said of the statue. "It's a beautiful woman, and part of it is to draw men in. Then they look down and see the message and they go, 'Ohhhh.' I hope that happens thousands of times."

As word spreads about the statue, it's becoming a popular selfie spot.

"She is exceptional," said Jo Sutton, 43, a high school art teacher who hopes to bring her class to see the statue.

Businessman Michael Fennell, 73, stood taking pictures from several angles to send to his son, a sculptor in New York.

"This is a world-class statue," Fennell said. "This is not a woman cowering because the world is against her. This is a woman saying, 'Here we are! We have arrived!' I love it."