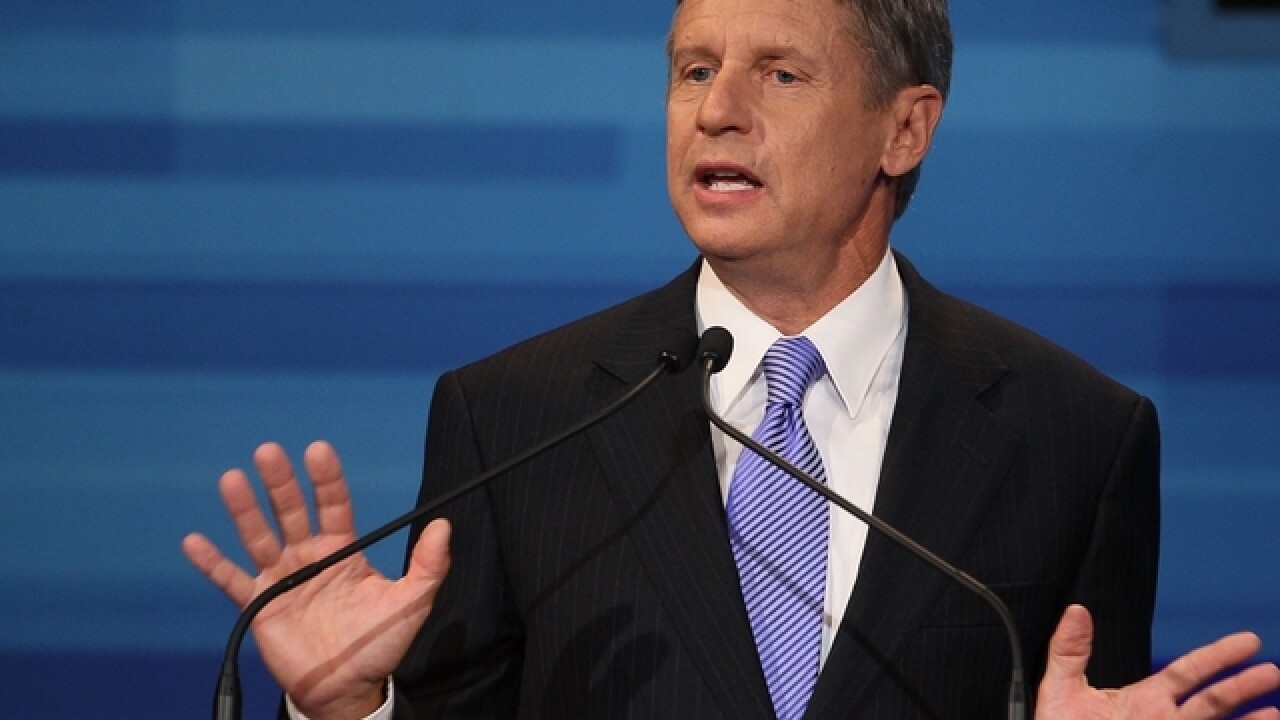 COLUMBUS, Ohio (AP) — While Libertarian presidential candidate Gary Johnson is set to appear on ballots in at least 39 states, swing state Ohio is among the places where his supporters are still working to get his name out to voters this fall.

Whether he's successful could make a difference to Republicans, particularly the fortunes of GOP presidential nominee Donald Trump, who is in a close race in the state with Democrat Hillary Clinton. Johnson on the ballot could complicate the Ohio race for Trump if conservatives who want a smaller government want a choice other than the celebrity billionaire.

And Trump's prospects in Ohio already are complicated. Gov. John Kasich, defeated by Trump for the GOP nomination, has refused to endorse the billionaire celebrity. No Republican candidate has been elected president without winning Ohio.

But getting on the ballot is a complicated task involving potential name-swapping, in part because Libertarians are not recognized as a political party in Ohio. On Wednesday, Johnson's ballot status was uncertain.

A day earlier, Libertarians submitted thousands of signatures on behalf of a different candidate. Party activists say the candidate on the paperwork, Charlie Earl, who ran for Ohio governor in 2014, is just a stand-in who will be replaced with Johnson and his running mate once the petitions are certified by the state's elections chief.

"That was the only way we could do it," said Aaron Keith Harris, a spokesman for the Libertarian Party of Ohio. Libertarians also used a placeholder name in Pennsylvania, another battleground state.

The secretary of state's office has said it's not seen a name-swap used before in the presidential race in Ohio, and its legal team will review the situation.

Mark Brown, an attorney who's represented Ohio Libertarians in election lawsuits, says state law allows for the switch and the secretary of state's own election calendar lists an Aug. 15 deadline for such replacements.

Johnson is on track to be on the ballot in all 50 states and the District of Columbia, Howell said, noting Ohio has been "one of the worst" states for access. The ballot effort is still ongoing in other battleground states, including Iowa and Virginia.

If he succeeds, Johnson would have achieved a milestone. The Libertarian presidential nominee wasn't on all state ballots in 2012, 2008 or 2004.

A serious hurdle for Libertarians and other minor parties is a patchwork of rules and laws nationwide governing access to ballots. "It's the number one problem that third party candidates face," said Barry Burden, a professor of political science at the University of Wisconsin in Madison and director of the Elections Research Center.

In Massachusetts, Libertarian vice presidential nominee William Weld hand-delivered the signatures needed to guarantee his name and Johnson's as November candidates. Candidates in major parties also must meet a signature threshold there. In Oklahoma, Libertarians are now a recognized political party allowing candidates to run at all levels without signature drives.

Even if Johnson and Weld make Ohio's ballot, both would lack the party's label or any designation. They are expected to be identified as independents rather than Libertarians in at least a couple of states.

Green Party presidential candidate Jill Stein and running mate Ajamu Baraka are slated to appear on ballots in at least 27 states, according to their party. They've filed their paperwork to get on Ohio's ballot.

Johnson and Stein are running in the single digits among voters in battleground Ohio, according a Quinnipiac University poll published Tuesday. The survey found Clinton at 44 percent to Trump's 42 percent, with Johnson at 8 percent and Stein at 3 percent.

A July Associated Press-GfK poll found both Stein and Johnson remain virtual unknowns among Americans, with 76 percent saying they don't know enough about Johnson to have a favorable or unfavorable opinion and 82 percent saying the same about Stein.