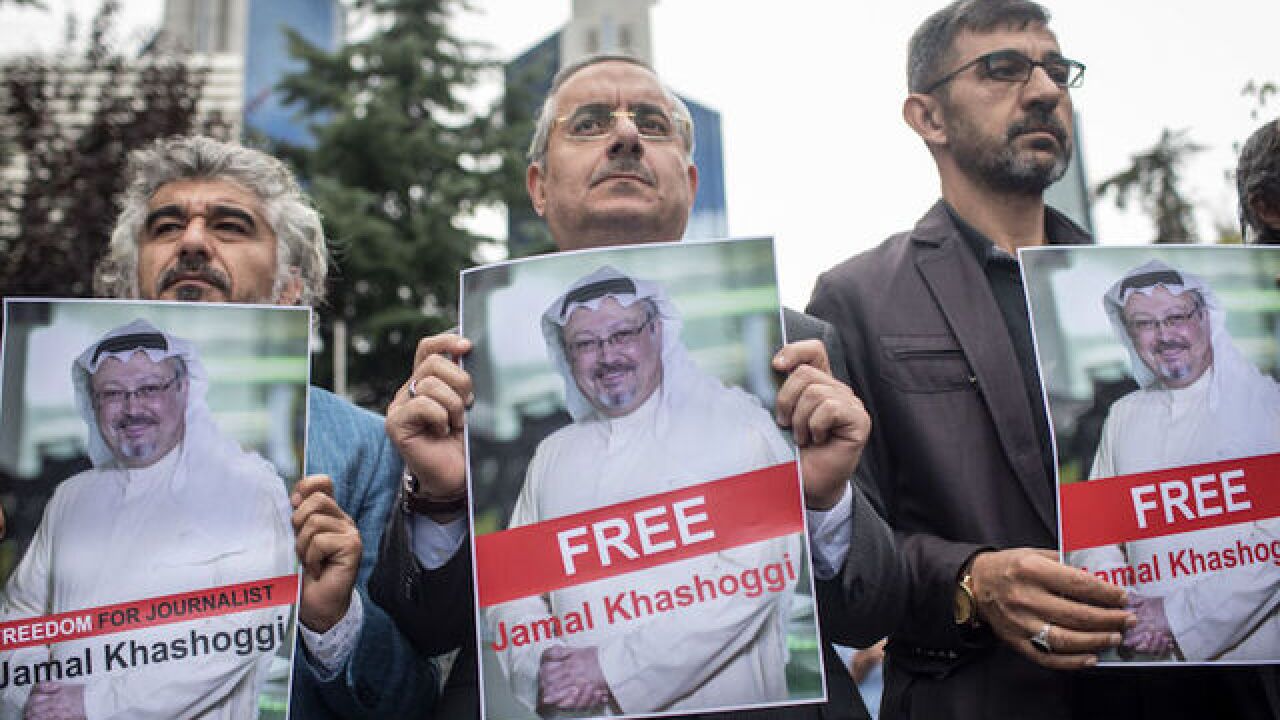 Image copyright 2018 Getty Images. All rights reserved. This material may not be published, broadcast, rewritten, or redistributed.
Chris McGrath
<p>People hold posters of Saudi journalist Jamal Khashoggi during a protest organized by members of the Turkish-Arabic Media Association at the entrance to Saudi Arabia's consulate on October 8, 2018 in Istanbul, Turkey. </p>

Friends of Jamal Khashoggi, the dissident Saudi journalist killed in disputed circumstances in his country's consulate in Istanbul, have demanded that authorities in Riyadh produce his remains.

After nearly three weeks in which it denied anything untoward had happened on in its diplomatic premises in Turkey, Saudi Arabia admitted Khashoggi had died but claimed it was the accidental result of a brawl.

Turkish officials privately believe he was dismembered, and Saudi authorities have failed to produce his body or say where they where they believe it to be. All they would admit was that officials engaged in a cover-up.

Speaking to reporters outside Saudi Arabia's Istanbul consulate Saturday, Turan Kislakci, the head of the Turkish Arab Media Association and a friend of Khashoggi, called on Saudi Arabia to hand over the journalist's body. "Give us Jamal, so we can have a funeral for him. So that all people who care about him, world leaders, can come here to Istanbul for the funeral," said Kislakci.

"Exactly 18 days ago, a brutal murder was carried out. Like Saad Hariri, we thought (Khashoggi) would walk out. Three days later we lost hope," he said, invoking the case of Lebanese Prime Minister Saad Hariri who was detained in Saudi Arabia, according to multiple sources, last November. "We want justice for Jamal. Eighteen (suspects) are not enough. We want those who ordered it."

Justice and Development Party spokesperson Omer Celik indicated that Turkey was not satisfied with the Saudi contention that Khashoggi died accidentally rather than as the result of a premeditated killing.

"We are not preemptively blaming anyone but we will also not allow a cover-up," Celik said on Saturday, in the first official Turkish reaction to Saudi Arabia's midnight statement claiming Khashoggi's death was accidental. "It is a matter of honor for us that this is uncovered. We will shed light on this using all means we have. That is the will of our president," Celik said.

In a statement released in the early hours of Saturday morning, Saudi Arabia claimed Khashoggi died in a fistfight after a discussion turned violent. A source with close connections to the Saudi Royal Palace told CNN that, in the Saudis' determination, Khashoggi's cause of death was a chokehold or strangulation, but officials provided no evidence to support the conclusion.

The altercation involved multiple Saudi officials at the country's consulate in Istanbul, according to the statement. Turkish officials say 15 Saudis traveled to Istanbul on the day of Khashoggi's disappearance, and they say privately that he was dismembered at the consulate.

The suspects later tried to cover up the incident, the Saudi statement added.

Authorities announced a purge of top Saudi officials, the detention of 18 people and an overhaul of the intelligence services that will be led by the country's de facto ruler, Crown Prince Mohammed bin Salman -- whom US officials privately believe must have been aware of the operation to target Khashoggi.

Riyadh's statement was the first official confirmation that Khashoggi died at its Istanbul consulate, and the first admission that it had a role in his killing -- even as it maintains the death was accidental.

US President Donald Trump indicated he believed the Saudi account was credible, although he added that some questions remained. UN Secretary-General Antonio Guterres was "deeply troubled" by the explanation, his spokesman said.

Some members of the US Congress were less accepting of the Saudi version of events. "To say that I am skeptical of the new Saudi narrative about Mr. Khashoggi is an understatement," South Carolina Sen. Lindsey Graham, a Republican, said on Twitter.

Khashoggi went into self-imposed exile in June 2017 just as bin Salman was elevated to Crown Prince. In his first Washington Post opinion piece after he left Saudi Arabia, he described the political atmosphere in the kingdom as "unbearable."

His killing at the consulate comes amid a wave of arrests that have targeted clerics, human rights advocates and members of Saudi Arabia's intelligentsia.

The crackdown has largely been led by a powerful security apparatus, known as the State Security Presidency, created and led by bin Salman.