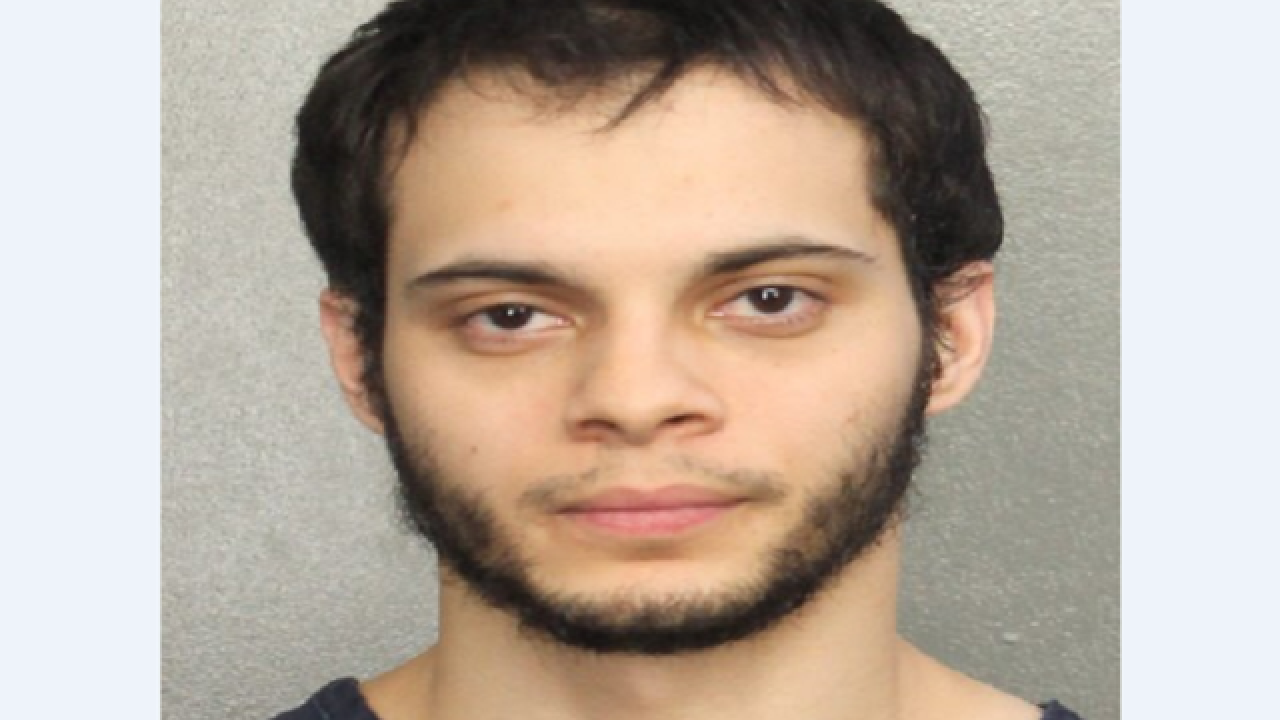 FORT LAUDERDALE, Florida (CNN) -- Two of the three charges against Fort Lauderdale airport shooting suspect Esteban Santiago carry the possibility of the death penalty, a federal magistrate judge told Santiago on Monday.
The charges handed down are using and carrying a firearm during and in relation to a crime of violence; performing an act of violence against a person at an airport serving international civil aviation that caused serious bodily injury; and causing the death of a person through the use of a firearm.
The latter two are punishable by death, while the first charge carries a maximum penalty of life in prison.
Authorities claim Santiago has confessed to the Friday mass shooting at Fort Lauderdale-Hollywood International Airport that left five people dead.
Santiago, 26, entered the court in a red prison jumpsuit and sat down. He kept his head down throughout his first court appearance. He told US Magistrate Judge Alicia O. Valle that he understood his rights before explaining he was not employed and had served in the Army for about 10 years.
He owns no car or property, he said, and has only $5 or $10 in his bank account.
Valle appointed Santiago a lawyer. His next court date is January 17, and his arraignment is slated for January 23.
Since the shooting, details about the attack, the victims and how the suspect may have "slipped through the cracks" have emerged. Here's what we know:
The suspect's background and travels
-- Santiago, a security guard living in Alaska, had served in the US Army Reserve and the Alaska Army National Guard. He completed a 10-month tour of Iraq from 2010 to 2011.
-- After his time in Iraq, his aunt and brother said, he came back a changed man -- hearing voices or having "visions all the time."
-- Santiago recently began selling his possessions, including his car. Friends and associates noticed more erratic behavior, investigators have learned from interviews with those who know him.
-- The suspect rented a small room at Qupqugiaq Inn, an Anchorage motel. The FBI searched the room on Friday night.
-- Two months ago, Santiago voluntarily went into the Anchorage FBI office and said his mind was being controlled by US intelligence. He was "having terroristic thoughts and believed he was influenced by ISIS," Anchorage police said.
-- At that time, authorities took away his gun and ordered a mental health evaluation. But he was not deemed mentally defective, so authorities later gave him back his gun. Sources say it was the same gun Santiago used in Friday's rampage.
-- "We had this situation where he slipped through the cracks," CNN national security and law enforcement analyst Tom Fuentes said. But Karen Loeffler, the US Attorney for the District of Alaska, said she thinks "law enforcement acted within the laws that they have."
-- Santiago told investigators he bought a one-way ticket from Anchorage to Fort Lauderdale and brought a Walther 9-millimeter pistol and two magazines.
-- A lieutenant with the Anchorage airport police said Santiago had one checked bag -- a handgun case containing a pistol.
-- Though authorities do not yet know Santiago's motive, the FBI has not ruled out terrorism.
-- The day before the shooting, Santiago spoke to a sibling in Florida and told him he wanted to visit, but Santiago didn't say he planned to take a flight the next day, according to another sibling, Bryan Santiago, who lives in Puerto Rico. Bryan Santiago said he also didn't know his brother would be traveling to Florida on Friday.
Video of shooting released
Security footage obtained by TMZ shows the seconds before and after the shooting. The gunman walks through the baggage claim area at Fort Lauderdale-Hollywood International Airport, just steps behind a man and two boys, and pulls a handgun from his waistband.
The gunman then fires about three times before running out of the camera's view. A couple sitting nearby drops to the ground. A woman ducks behind a baggage cart. Several people, seeing nowhere to take cover, dive face-first to the ground.
After the deadly rampage, Santiago was arrested without incident, authorities said.
The victims
Four of the five slain victims have been publicly identified; two of them were grandparents.
Terry Andres was at the airport with his wife, about to start a vacation ahead of his 63rd birthday. His wife was not wounded.
"He and Ann were married for 40 years, and he absolutely adored his children and grandchildren," said a longtime friend who wanted to stay anonymous.
In the case of Michael Oehme's death, there were public condolences from state Sen. Chuck Grassley of Iowa.
"Pray as I will for Oehme family of CouncilBluffs Iowa /Father Michael was killed and Kari the mother was wounded at FtLauderdale Massacre," Grassley tweeted.
Shirley Timmons, 70, had been married for 51 years to her high school sweetheart, and "together they built a close, loving family with their three daughters, three son-in-laws and eight grandchildren," her grandson Steve Reineccius said in a statement. "For Shirley, family meant vacations, football games and holiday traditions."
Olga Woltering, 84, and her husband, Ralph headed to Fort Lauderdale for a cruise. Her husband was not seriously wounded.
"Olga was one of the most joyful, loving, caring and committed people I have ever met," the Rev. Fernando Molina-Restrepo of the Catholic Church of the Transfiguration in Marietta, Georgia, said.
Two of the injured victims remained in intensive care late Sunday, while the remaining four had been released or were recovering at Broward General Hospital, Sheriff Scott Israel said.
The hospital gave slightly different numbers, saying seven victims -- including five who had been shot -- remained hospitalized Sunday. One gunshot victim was released Saturday, the hospital said.
CNN's Evan Perez, Shimon Prokupecz, Dan Simon, Jason Kravarik, Ray Sanchez, Kevin Conlon, Sheena Jones and Pamela Brown contributed to this report.
The-CNN-Wire
™ & © 2017 Cable News Network, Inc., a Time Warner Company. All rights reserved.
Copyright 2017 Scripps Media, Inc. All rights reserved. This material may not be published, broadcast, rewritten, or redistributed.